Today I’m sharing an update on the first trimester of this pregnancy after sharing our announcement video last week (seen here). 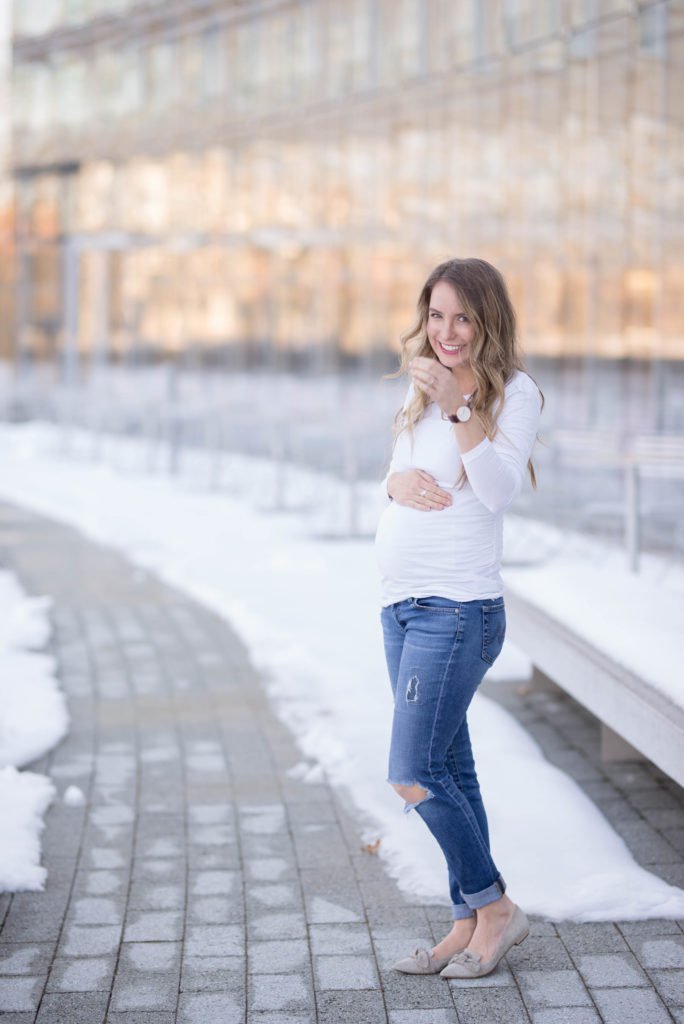 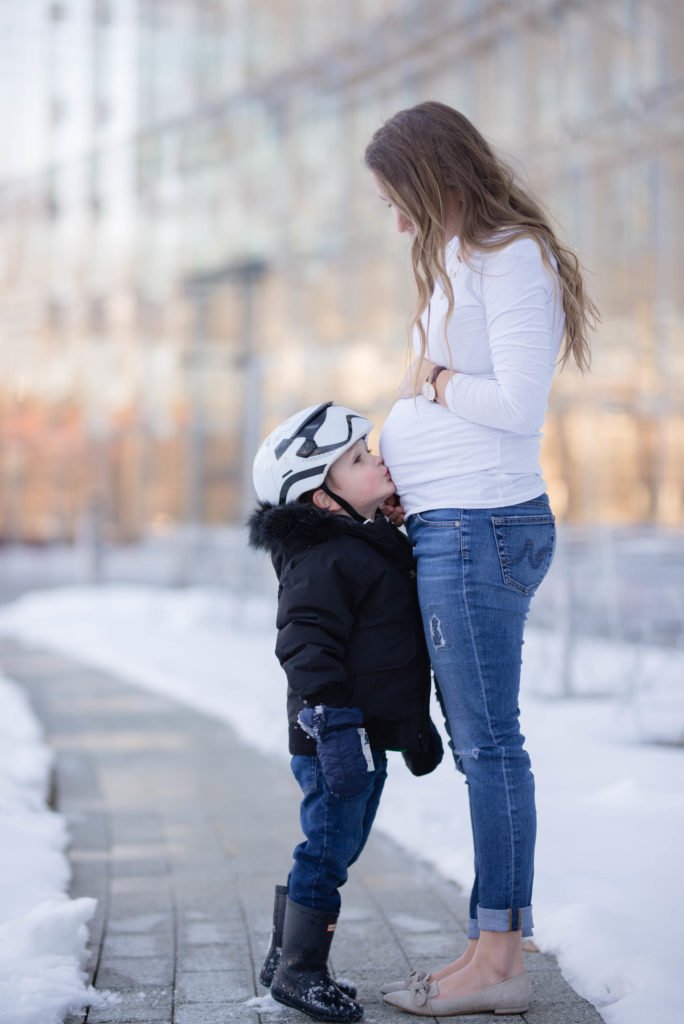 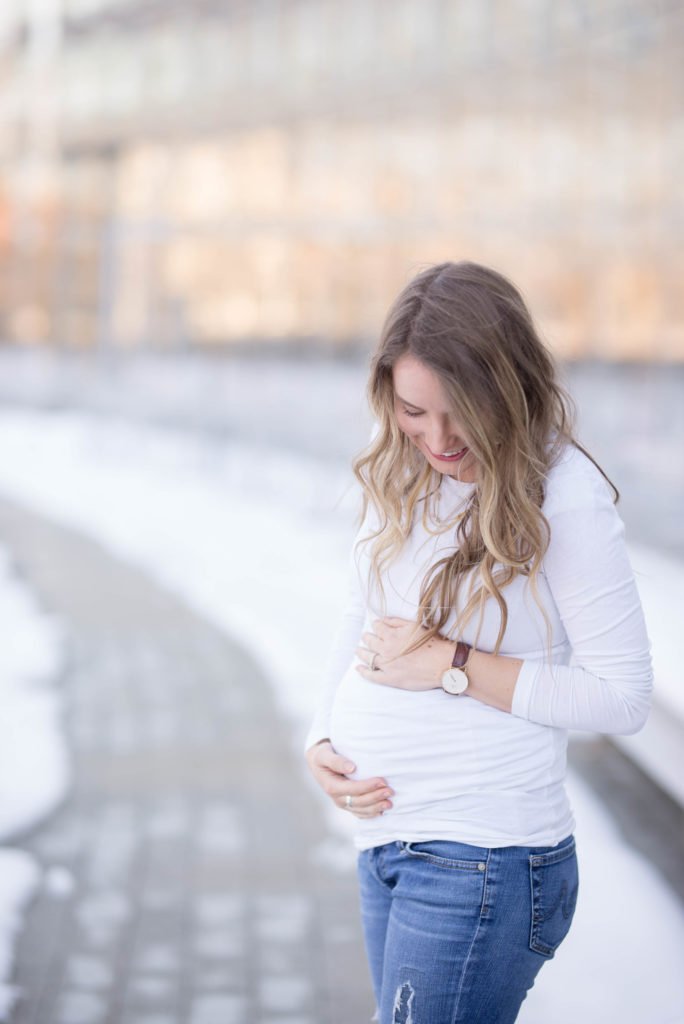 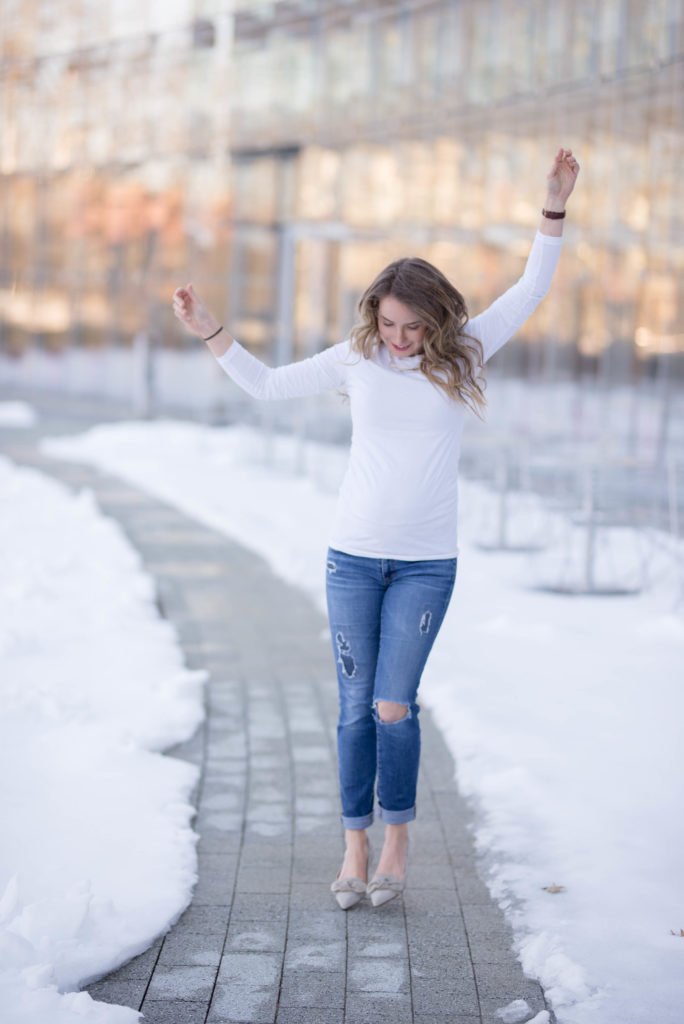 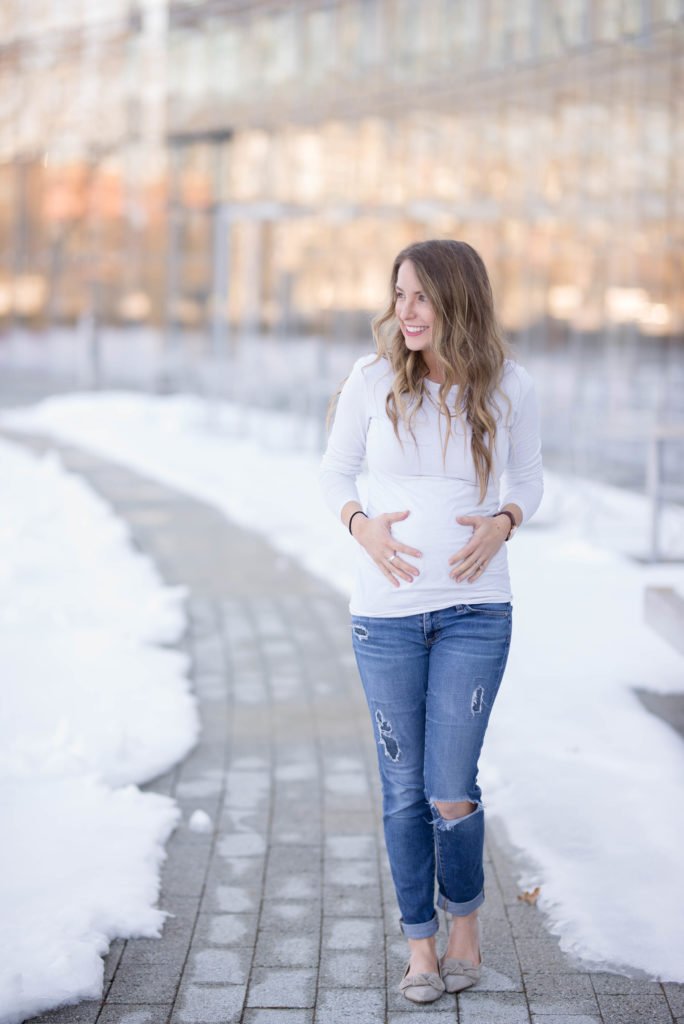 Thank you, THANK YOU for all your kind words, excitement, and congratulations over the last two days!

It feels freeing to finally share what has been the constant topic of conversation in our house for the last few months.

Here’s a little FAQ + a few details about this pregnancy so far.

How are you feeling?

I am starting to feel so much better! I’m still nauseaus each morning when I wake up and kind of yucky by bedtime. I still need to eat every two hours or so. I still take naps about half the days while the kids are sleeping/doing quiet time. BUT I feel about 5 times better than I did over Christmas break. Mid-december through mid-January were miserable. I was so grateful Ben was off school and spending Christmas at my parents where my family stepped in was such a blessing.

There are still times when it hits and I feel like we’re back in the first trimester but usually I can trace that to doing too much or note eating enough (like last night when I skipped my usual 10pm snack because I wasn’t that hungry and I really wanted to go to sleep. I’m paying for it this morning).

**I am so grateful to be pregnant! I feel lucky at the chance to carry another baby. Talking about the hardships of pregnancy sounds a bit like complaining (Somedays I definitely complain). These answers are meant to detail this pregnancy. I am happy about being pregnant and being pregnant is still hard.

When are you due?

How does this compare to your other pregnancies?

With each of my pregnancies I have started to feel a little bloated and nauseaus and then taken a pregnancy test. This was was the same but I took the pregnancy test a week or two earlier at five weeks when the symptoms first started.

I’ve had similar pregnancy insomnia this time around (sounds more dramatic than it is – just a hard time sleeping/ going back to sleep when I wake up in the night).

I haven’t thrown up this pregnancy but weeks 6-11 were much harder this time around (or I have a pretty bad memory). I never understood those people who said it was worse when you didn’t throw up but at least in my previous pregnancies, throwing up gave me a few hours afterward where I could eat and feel okay. This time around things just got progressively worse throughout the day and by dinner time, I could barely hold it together. I was in bed around the same time as the kids.

A first trimester update with Lincoln

A first trimester update with Adelaide

How did you tell your husband you were pregnant?

After joking around for a few days about some pregnancy symptoms, Ben picked up a pregnancy test for me.  I waited until he was out at the climbing gym before taking it.

I know it’s a family thing, but for me, taking the test seems so personal and I like to be able to sit with my own emotions for a little while afterward.

With my previous pregnancies the positive was quite obvious right away but this time the test looked negative and it wasn’t until I came back 5 or 10 minutes later to double check that I saw the very very faint second line.

I left the test out where Ben could see it and confirmed it with him when we got home from some campus event that night. I love the idea of doing cute things to tell your husband you’re pregnant but it just isn’t a secret I can keep long enough to plan something cute.

How did you tell the kids?

I didn’t tell the kids until right before I told my family because I knew they wouldn’t be able to keep a secret. Telling them has been my favorite moment of this pregnancy so far. Here’s a little journal excerpt from over Christmas when I shared the news:

I took Lincoln and Adelaide down to the basement yesterday before dinner. I explained how before they came to be part of our family they were babies in my belly. And they grew and then it was time for them to come out.

“Right now there is a tiny baby inside my belly ..and it is going to grow for a long time and then in the summer, after Adelaide turns three, it is going to come out.”

Lincoln, looking skeptical, asked “is it a pretend baby?”

His eyes getting wide, he stepped back, “There’s going to be ANOTHER KID in our FAMILY!?!?!” He was so happy and so excited.

Adelaide practiced saying “I’m going to be a big sister” but didn’t really get it and skipped off to play with something else.

Lincoln asked if the baby was in my belly and if he could kiss it. He planned a sweet kiss on my sweater and then starting tickling me (well, “the baby”).

How did you tell your families?

I had grand plans to share the news with my family on Christmas day but they all arrived in town the week before Christmas and I was too sick to keep it a secret for long. We told them the first night we were altogether, right after I told Lincoln and Adelaide. We gathered around Lincoln standing on the fireplace and he announced, “We are going to have another kid in our family!” (his excitement and my pregnancy hormones had me tearing up)

My brother figured it out a few hours earlier when he and Ben were getting something from the car and they talked about getting a new car and Caleb said, “Oh, because Elisabeth is pregnant, right?” Ben’s response was, “Oh, she told you?” No, no I hadn’t.

We let Lincoln tell Ben’s parents when we visited them in January.

What has surprised you about this pregnancy?

I started showing SO much sooner. I know they say you show sooner with each pregnancy but it seemed so obvious I was pregnant by 5 weeks. I had to ditch my regular pants (the problem with wearing tight high-rise jeans) by week 7 and I’m in only maternity clothes at this point.

I’ve been surprised at how affectionate Lincoln and Adelaide (mostly Lincoln) are toward the baby bump, kissing my belly regularly.

Right on track with my usual one pound a week (same as pregnancies with both Lincoln and Adelaide).

Will you find out the baby’s gender?

Right now we’re calling the baby a boy because it feels so much more personable than using neutral pronouns (“I can feel him moving” vs “I can feel it moving).

Similar to my first two pregnancies, sweets were NOT appetizing first trimester. With Lincoln I craved veggies + protein and with Adelaide bread and butter (and McDonalds hash browns) were the only things that sounded appetizing. This time I’ve been eating all the salads and bread and meat (so I can’t really guess on gender).

Do you have a name picked out?

Lincoln has several (I should share his full list at some point) but Ben and I have never found a name we agree on until the baby comes out.

So no name yet, but if we come up with one I’ll probably pretend we don’t have a name until the baby is born anyway because name opinions are so much kinder from friends + family once the baby is actually here.

jeans: These are the one pair of non-maternity pants I have left in my closet. They are one size up from my regular size and the only low/mid-rise pants I own. I snagged them off of thred-up after Adelaide was born and none of my clothes fit yet. (more non-maternity AG jeans here or check out thredUPs designer selection here)

shirt: GAP pure body tee (I have this top in three different colors and in the vneck version in another two, all from previous pregnancies)  (non maternity long sleeved options here) 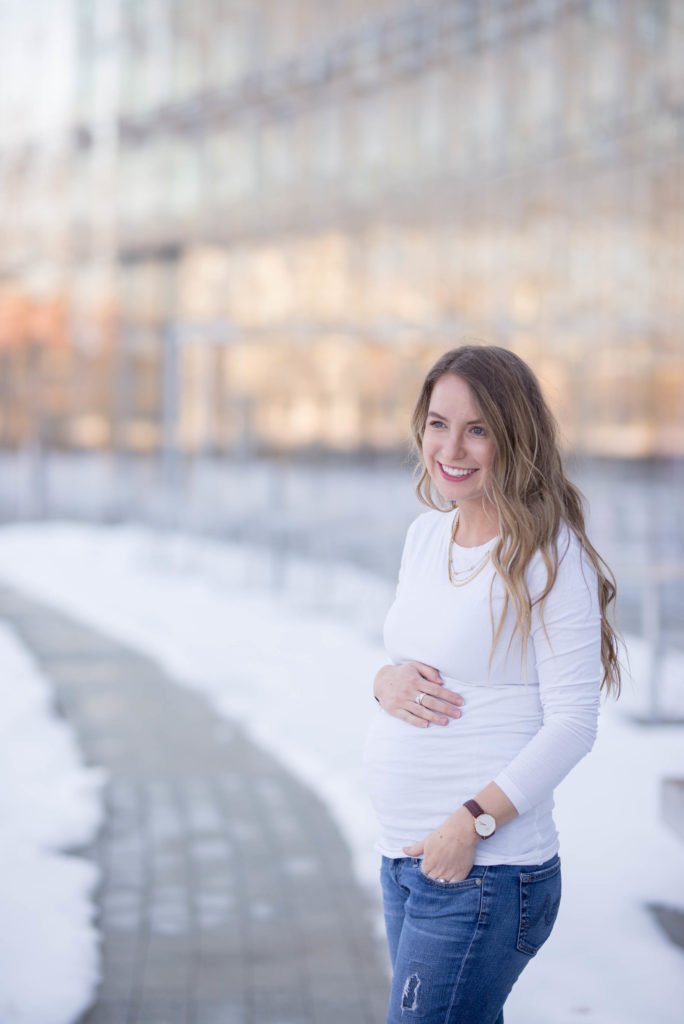 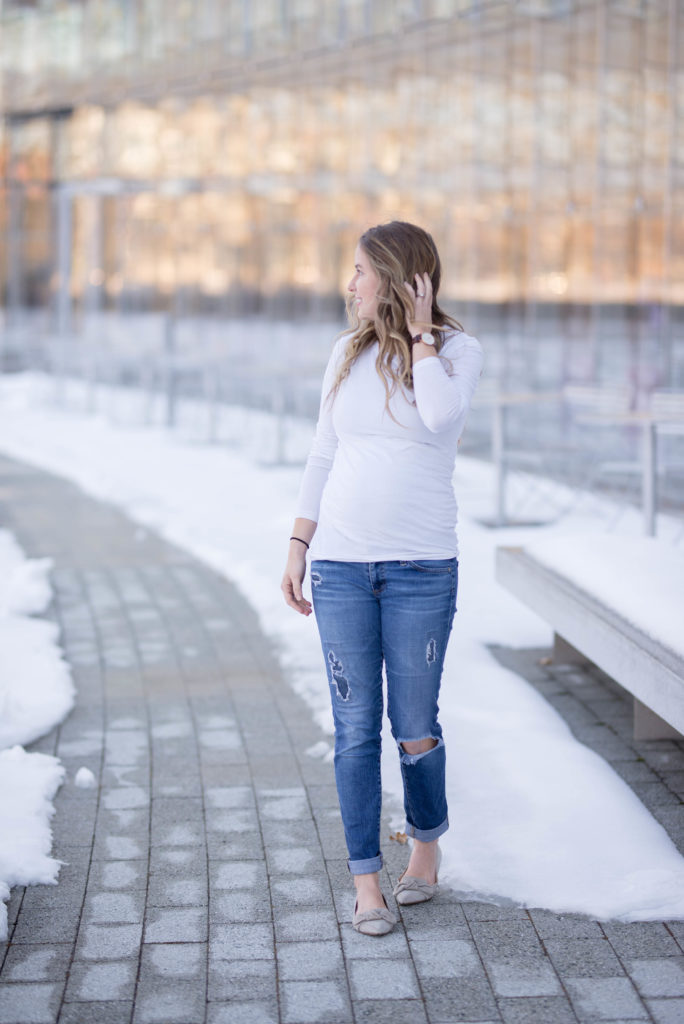 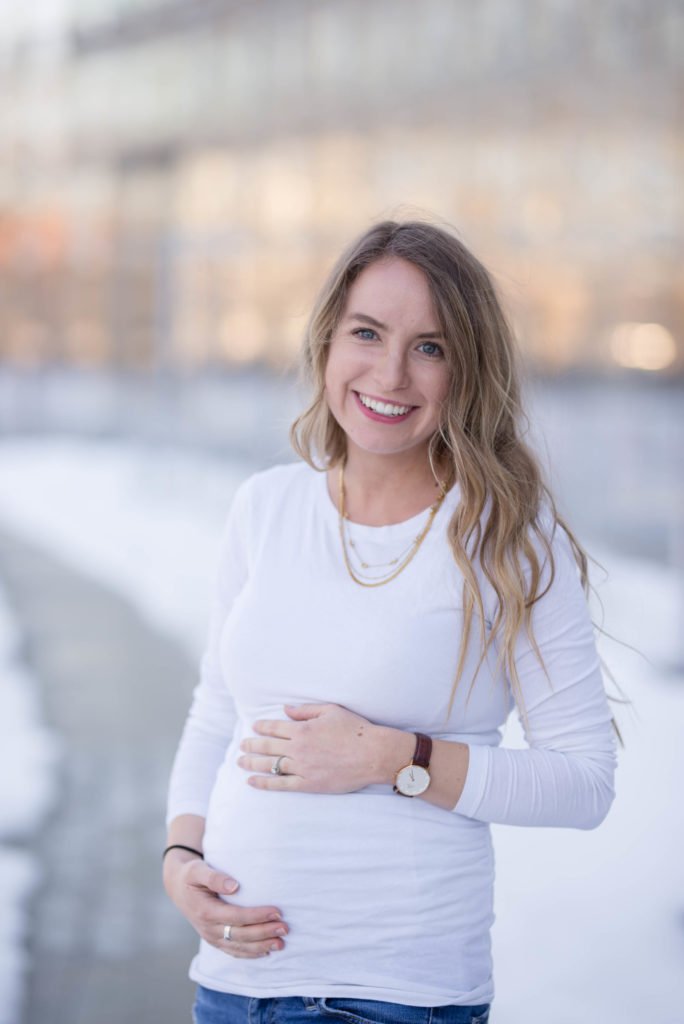 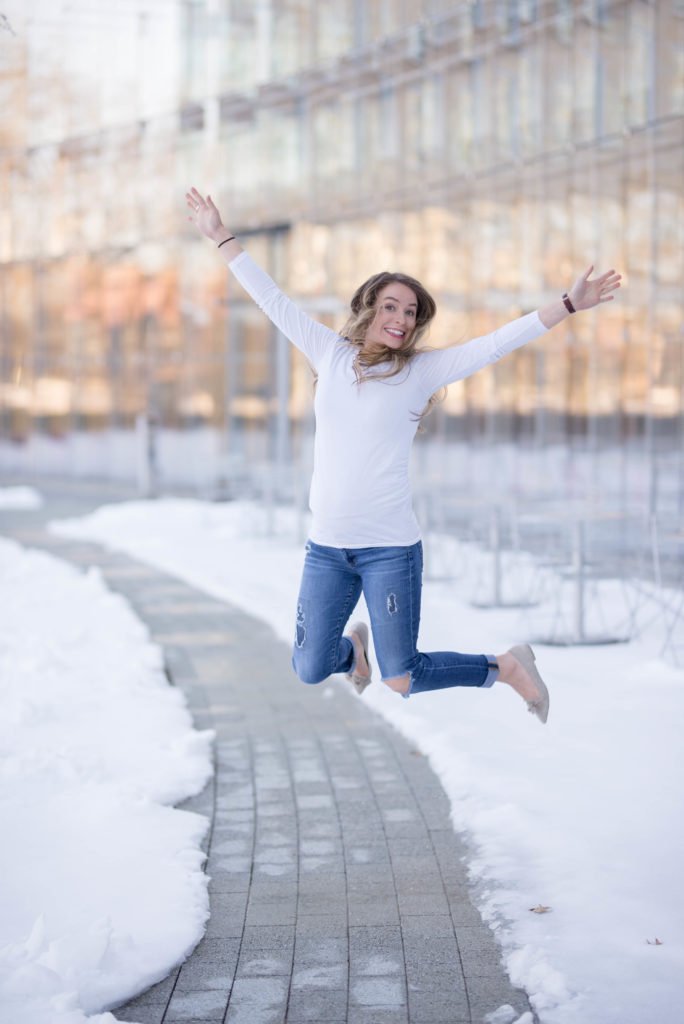 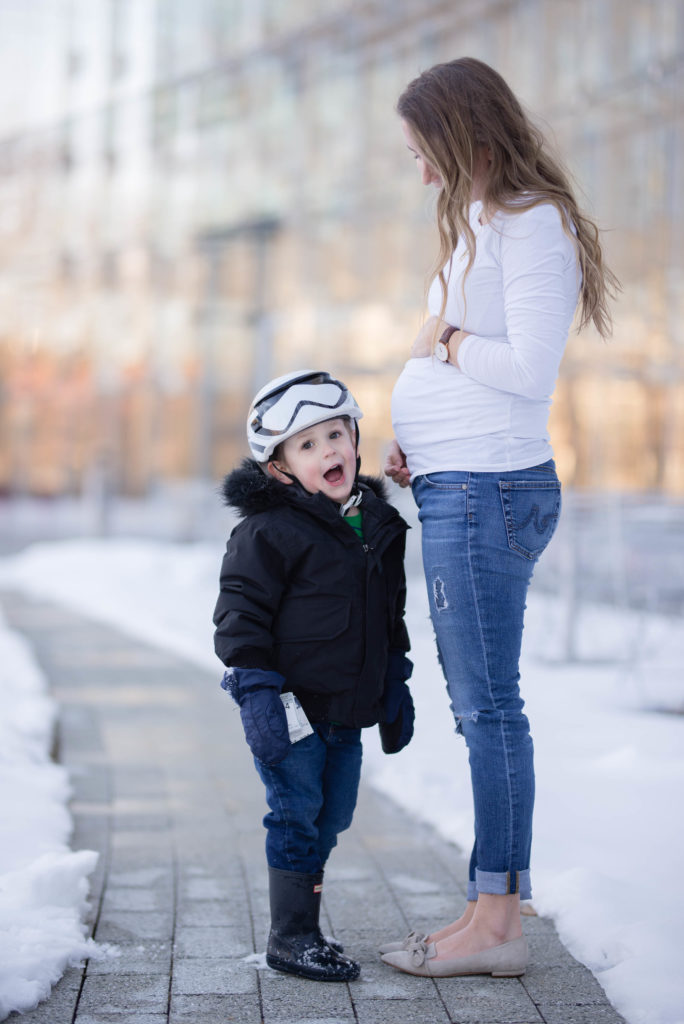 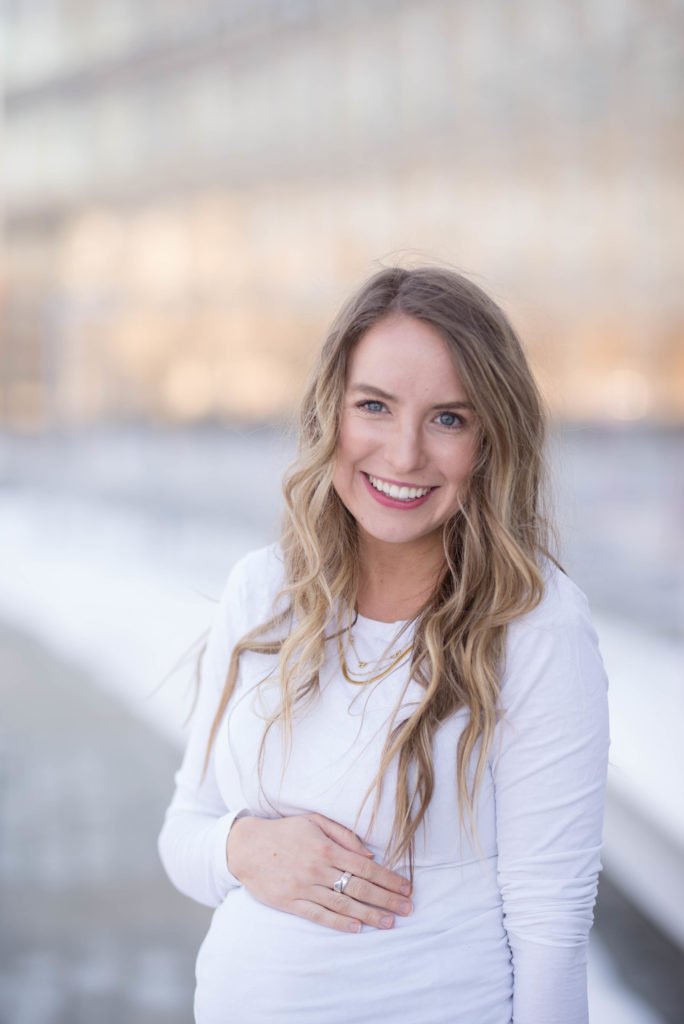 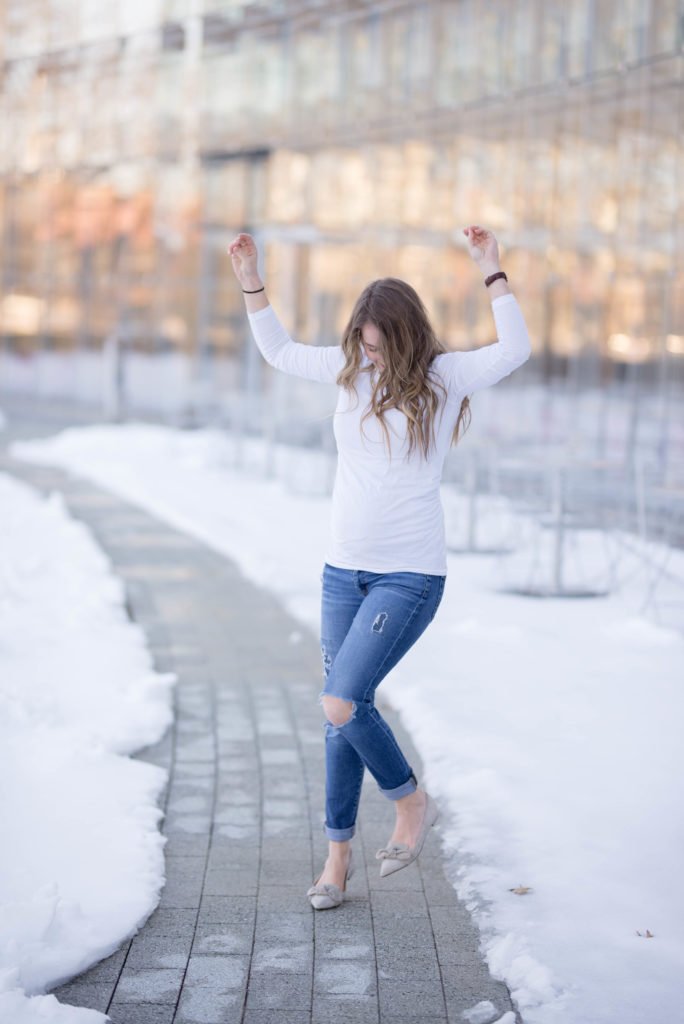 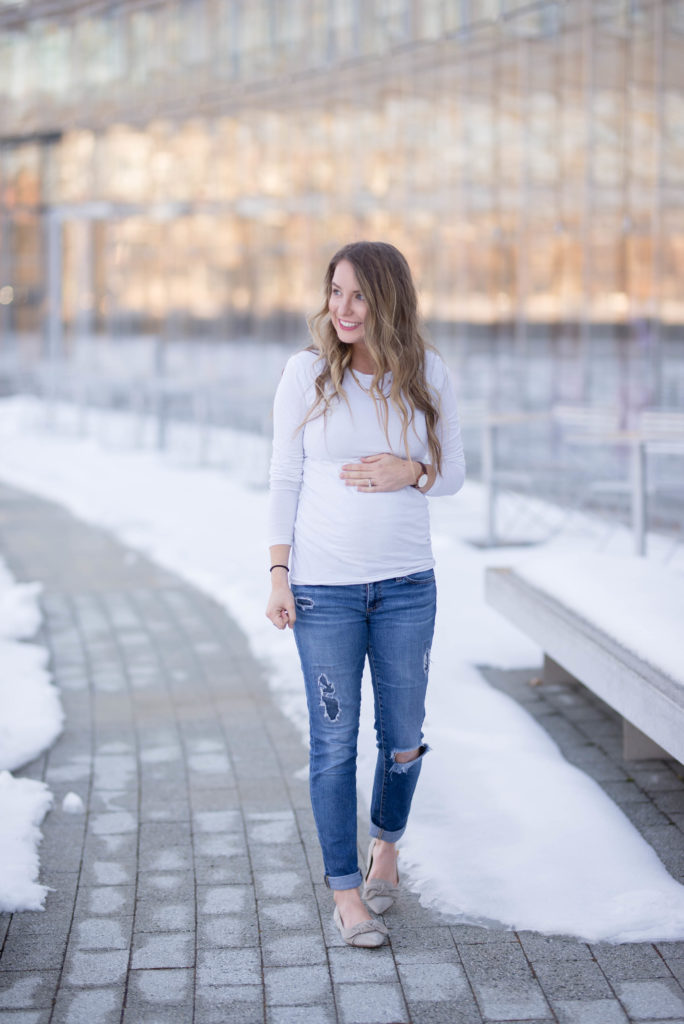