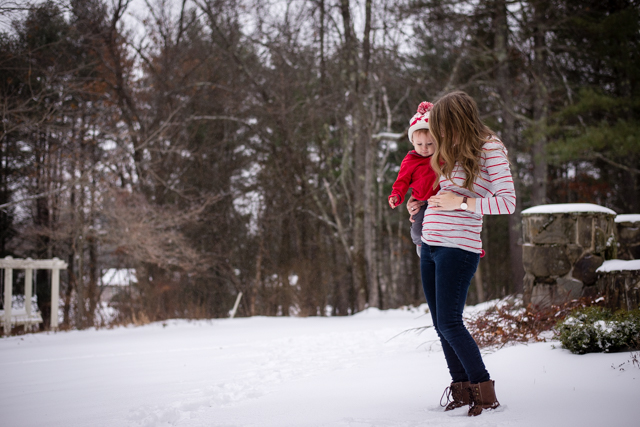 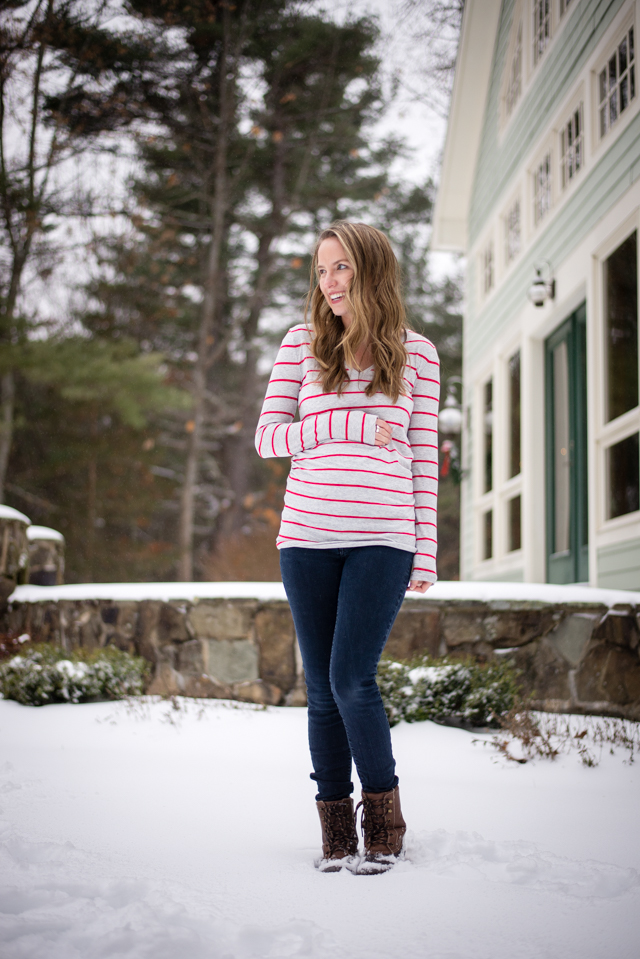 THANK YOU for all your kind words this week! It feels like such a relief to be able to let you in on this secret – because I’ve felt like a bit of a fraud the past two months as I’ve shared my life without this important new development (an exhausted, very nauseous fraud). I’ve got the details today, some of the frequently asked questions if you will, from the last few weeks if you’re interested:

-I’m due in the middle of June, a couple of days before Ben’s birthday. This puts the two babies seventeen months apart, just a month closer than my brother and I are. With the bit of trouble/length of time it took to get Lincoln here, I had almost given up on being able to have children this close – so we’re thrilled.

-I’m 15 weeks along right now and I’ve had a noticeable bump for the last month or so (especially in the evenings). I picked up a few pairs of maternity jeans from thredUP for my birthday (two months ago) and have been wearing those on a steady rotation with my sweatpants.
-We found out we were expecting the day after I got back from our California + New Hampshire trip this fall when I was about 6 weeks pregnant. My clothes were fitting a bit tighter and I was feeling a bit nauseous in the mornings before I’d eat but I chalked it up to vacationing and two weeks away from the gym. I spent the whole week at my parents joking around about being pregnant because I wouldn’t let myself get too excited at the possibility. I took a test while Ben was at work on a Monday and cried happy tears. That night I had dinner ready and a little note on his plate telling him he was such a good dad to Lincoln, it was probably time to do it all over again.

-I’ve been pretty sick and exhausted and the nausea has just started to fade the last week or so. At the peak I spent most of the days lying on the floor of Lincoln’s bedroom while he played around me. That child has been a pretty low maintenance saint the last two months.
-I told my immediate family in November for my birthday with this little video (I loved the idea of holding out and telling them a bit later, when it was okay for them to share the news, but I was too tired of making small talk with them on the phone and not being able to say what was really going on).

-My favorite response has been from the ultrasound tech at my OB whose eyes got wide as she exclaimed “its you again!” Yes, yes, I was just here for my 6 week post partum checkup 8 months ago.
-A close second was a friend who responded with “Oh I was wondering, because it was either that or you are just looking extra bloated today.” In her defense, the bump was noticeable.

-This pregnancy has been SO different from my first one so far. I’ve thrown up significantly less (although I think its because I have a baby who requires me to be up and eating breakfast at 6 am instead of sleeping in later – the four times I’ve slept in this pregnancy I’ve been miserable the rest of the morning), I think I’m more exhausted, and I want to eat very different food. With Lincoln the only things that were appetizing my first trimester were protein and vegetables and I couldn’t stomach ice cream or chocolate. This time around give me all the bread and butter. And I can’t even handle a salad. I won’t tell you how many times I’ve gone through the MacDonalds drive through just to get hashbrowns because nothing else sounded good and I needed to eat something.
-For a fun size comparison, check out this baby bump post from when I was 17 weeks pregnant (I’m 15 in these pictures)

shirt: GAP maternity
denim: J. Brand maternity (WHY did I not buy nice maternity jeans last time around? these are amazing and I’ve been wearing them since 6 weeks pregnant).
watch: Daniel Wellington
boots: my sister’s closet