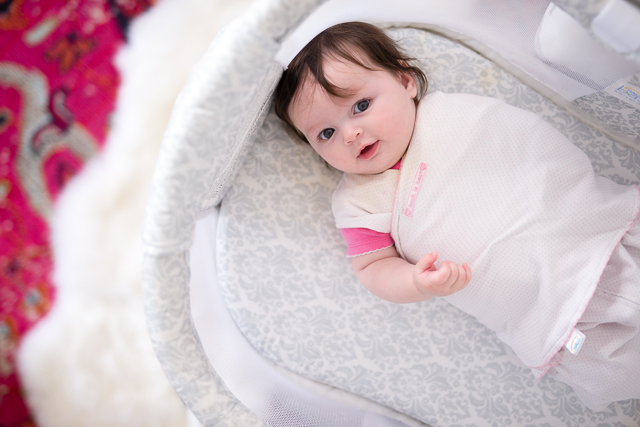 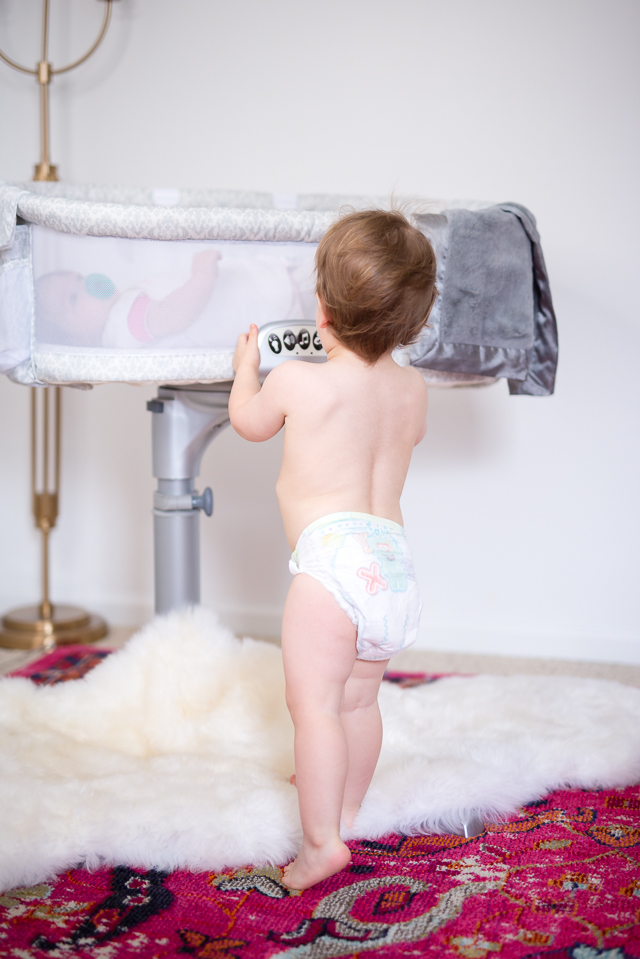 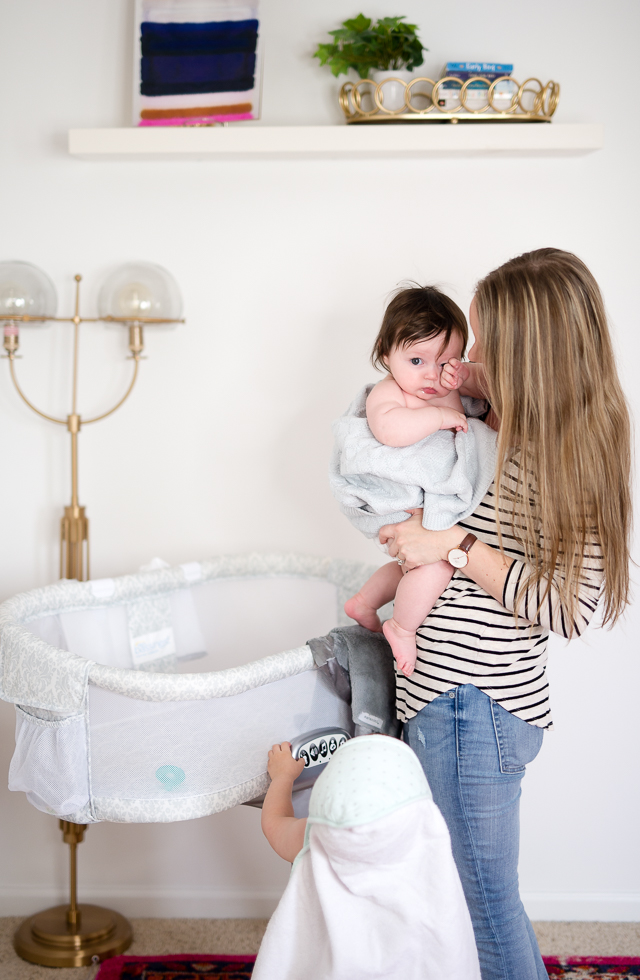 Here’s a glimpse into Adelaide’s routine at 5-6 months. Everything is a little less consistent (with the exception of bedtime) than it was with Lincoln but only because I don’t sacrifice everything else for the sake of baby’s sleep like I did this time a year ago with baby #1. I try to be home during nap time because she sleeps SO much better in her bassinest (best new baby product we tried this time around) but if we have errands to run or people to see or just a workout to squeeze in, I’ll push one of her naps by an hour or so.

Just looking for a sample schedule? Click over to page 2 for the condensed version.

Sometime between 4-5 am: Adelaide wakes up and I hear her chatting from my room across the hall. I walk straight to the kitchen to make a warm 6 ounce bottle, which takes three or four minutes. I leave the kitchen light on so there’s a bit of light coming through the door as I walk quietly into her room. I hand her the bottle while she’s still lying in her bassinest and quickly change her diaper while she begins drinking. She still sleeps partially swaddled in her Halo Sleep Sack Swaddle so her left arm stays swaddled through the diaper change. When I’m done, I pick her up and we finish the bottle rocking in glider across the room. The whole time her room stays dark, her noise machine stays on, and I don’t say a word. Before I leave I slip the pacifier back into her mouth and press the vibration button on her bassinet.

Sometime between 6:30 and 7:30 am: Adelaide wakes up for the day. Again, I hear here chatting in her crib and this time the first thing I do is talk or sing to her while opening the curtains and turning off the noise machine before unswaddling her and picking her up. And then there’s another diaper change.

Its playtime for the next hour and a half, rotating between sitting in her bumbo on the kitchen table while Lincoln and I eat breakfast and lying on the floor of the living room while Lincoln and I play with cars (or animals or trains or blocks). She loves to watch her brother and he’ll hand her toys to chew on.

9:00 am: She’s starting to get fussy so I make another 6 ounce bottle. Adelaide is swaddled in her Halo Sleep Sack (these days only one arm is swaddled), the noise machine is on, the lights are off, the blackout curtains closed, bassinet vibration, and her pacifier is in her mouth. Usually while I’m going through this quick routine I’m singing a soft song while Lincoln is still playing in the living room.

Sometimes she doesn’t go right to sleep without fussing and I head back in every 3-6 minutes to reassure her with a soft word and the reinsertion of the pacifier.

10:00 am: She wakes up on her own and often Lincoln is the one to hear her talking in her room. If she isn’t awake on her own at this point, I’ll go in, turn off her noise machine and leave the door open so she’ll begin to wake up. With Lincoln I can count the number of times I woke him from a nap on one hand but with Adelaide, I’m far less concerned about it affecting her other naps and we have places to be.

Because it’s freezing, the post-nap getting dressed process usually just involves a diaper change and maybe a hair brush and Adelaide often stays in he fleece footie pajamas all day. But if it’s not too cold, if her pajamas are dirty, or if I’m feeling extra ambitious, this is when she gets dressed.

10:30 am: We head to the gym just down the street and Adelaide and Lincoln are checked into the daycare. She spends the next hour or hour and a half between the activity center, a little bouncer, and the arms of the sweet daycare ladies. Usually she drinks another 4 ounces.

I’ve been bringing Lincoln to the gym 4-5 times a week since he was about 10 months and less regularly since he was about 4 months. It means I know the various daycare ladies well and it was so much easier to trust them with my 3 month old this time around.

12:00 pm We get home in time for lunch and Adelaide drinks part of another 4 ounce bottle while Lincoln has a sandwich.

12:30 pm (give or take twenty minutes): Adelaide is back, partially swaddled in her bassinet. She puts herself to sleep while I get Lincoln ready for a nap.

If she wakes up on the earlier side, I bring her little play mat into my room and she plays on the floor while I finish up whatever thing I’m working on for the blog that afternoon. Sometimes its a photoshoot in the kitchen and she hangs out next to me while I style + shoot. If she wakes up closer to 2:30 she gets my full attention until Lincoln wakes up. She’ll have tummy time, practice grabbing things, or just giggle with me for a few minutes. Somewhere in this she has another 4 ounce bottle.

3:00 pm: Another hour of play. We’ll read books with Lincoln, we’ll dance around the living room to Broadway songs (or Taylor Swift), or color at the kitchen table (while Adelaide watches).

4:00 pm:  This late in the afternoon she is usually ready for another nap. If we don’t have errands to run, Adelaide goes down for nap whenever she starts to get fussy, usually about 2 to 2 and a half hours after she woke up from her second nap. The latest I’ll put her down is 4:45 because I need her awake in time to go to bed at the same hour. Nap time is much more inconsistent, pushed here and there for things we have going on or just because I’ve lost track of time playing with the kids. I go by wake-times (putting her down for a nap after she’s been awake for a certain amount of time, which gets longer as she gets older, as opposed to at the specific time of day) except in the evening when I try to have her in bed as close to 6:30 every evening as I can. We go through the same dark room, noise machine, partially swaddled routine. Before she falls asleep I offer her another 4 ounce bottle and she’ll drink some of it. She finishes it after her nap.

5:15 pm: I go in to check on Adelaide to find her lying wide-eyed in her bassinet, completely silent. After a quick diaper change she hangs out in the kitchen in the mamaroo, her bumbo seat, or on her activity playmat while I make dinner. And if I’m not making dinner, usually she ends up in the jumper in the doorway to Lincoln’s room, observing her brother playing with his toy of choice that afternoon. Sometimes she’ll finish her bottle from her nap if she seems hungry.

Between 6 and 6:30 pm: I start getting her ready for bed. Rarely this starts with a bath (most of the time she bathes every three days or so during one of her morning wake periods when Lincoln is happy to play cars by himself or trains on the floor of the bathroom). Adelaide drinks another 4-8 ounces before bed and gets zipped into another pair of fleece footie pajamas. I swaddle her back into the Halo Sleep Sack Swaddle and sing a song or two while she finishes her milk. I turn on the noise machine, insert her pacifier, and turn on the bassinet vibrations before saying goodnight.

For the condensed version,  few more notes + thoughts on all the products I mentioned, head over to part 2