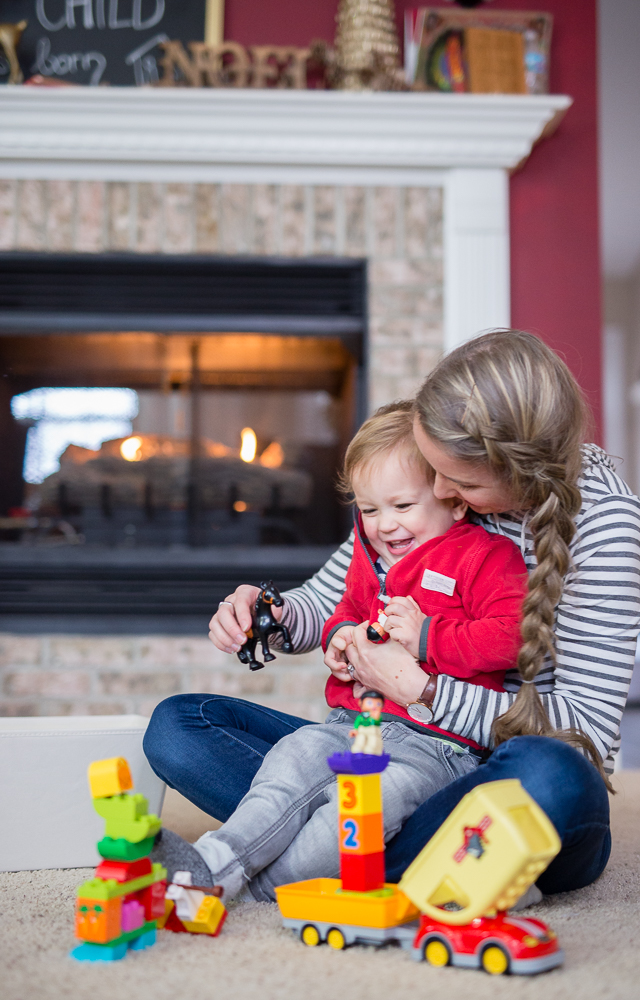 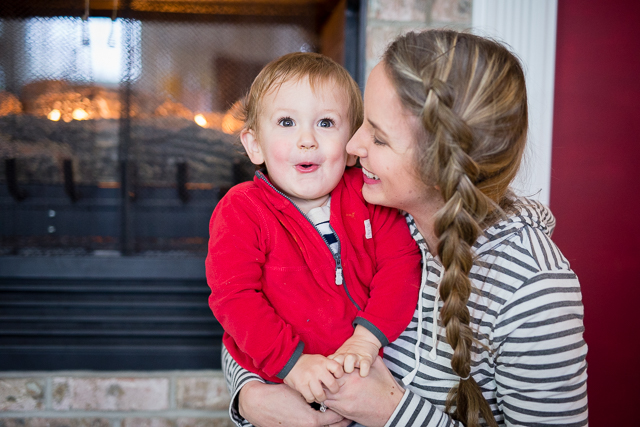 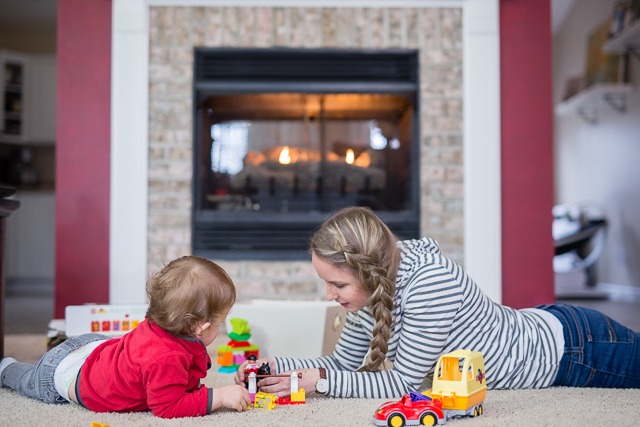 My mom bought a dinosaur LEGO DUPLO set twenty years ago and when it came time to put it together one Saturday morning (twenty years ago), my dad declared we needed more DUPLO bricks. She bought another two or three preschool sets (the extra large set you would buy to have a classroom set for your preschool students). And we would play for hours. And hours. And hours.

Sometimes we’d wake up, my brother and I, and my mom would declare we were having a “LEGO party” which meant nothing else was on the agenda except for hours of building blocks. I don’t remember a lot of what we built, but I do remember my mom sitting on the floor, hair pulled back, surrounded by blocks and smiling.

She did the same thing with Lincoln when we brought out those dinosaur DUPLO bricks last month (thank goodness they’re twice the size of LEGO bricks so no chance of choking) and the only thing better than introducing your baby to your favorite childhood toys, is watching your mom do it.

We got a few sets when we got back to Ohio a couple of weeks ago and Lincoln has been playing with them regularly since. He repeats “mama, sit!” until I sit down on the floor next to him and we stack and break and stack and build and move blocks all afternoon. I love watching his imagination work as he role plays with the little horse and rider, loading them up in the trailer and galloping across the room.

It’s been a great reminder for me that at this age Lincoln really learn through playing. Whether it’s the hand-eye coordination of stacking and building or stretching his imagination with the little figurines, I can see his little mind at work. It’s also been a great reason to get on the floor and just play with him. Back in New Hampshire my dad spent a few hours just building towers with him, my mom designed dinosaur villages, and I mostly helped him put the blocks back into bins at the end of the night. But we’ve also been sorting, naming colors, and counting blocks as we stack them (we still get a bit mixed up about five, six, and seven 😉 ). 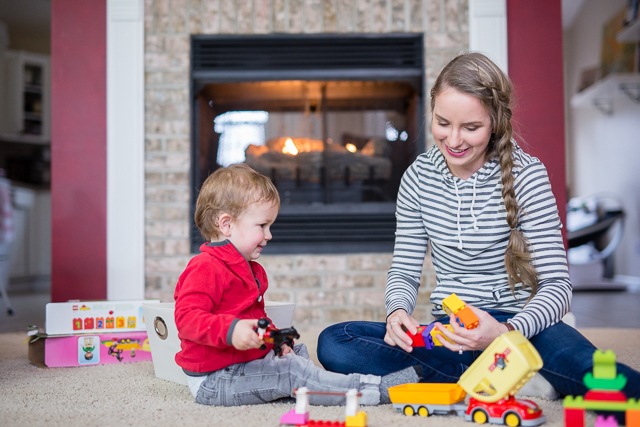 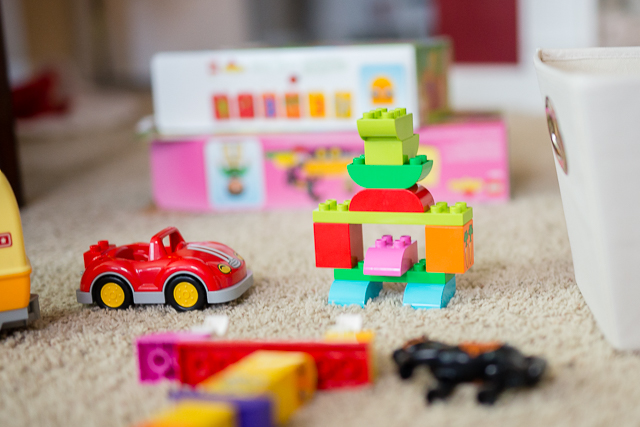 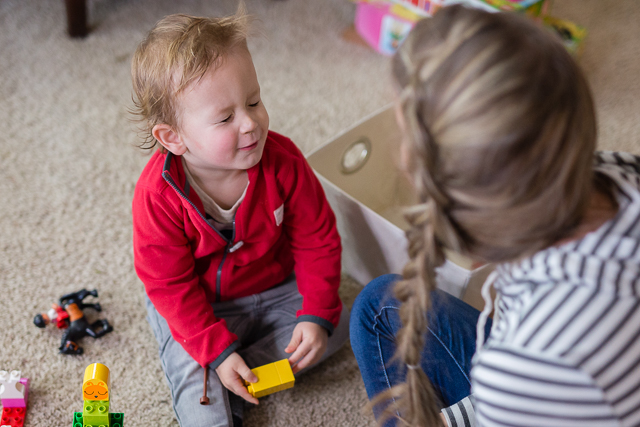 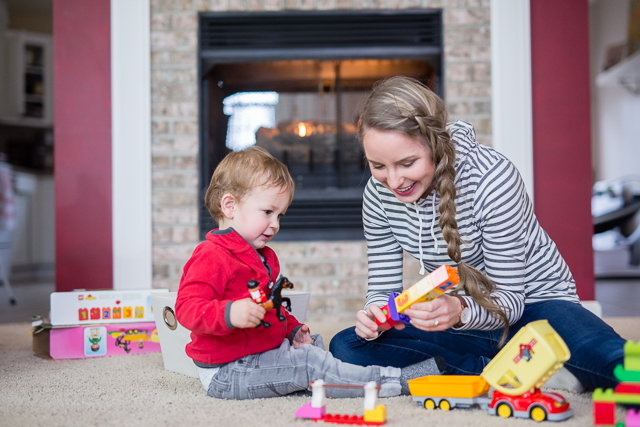 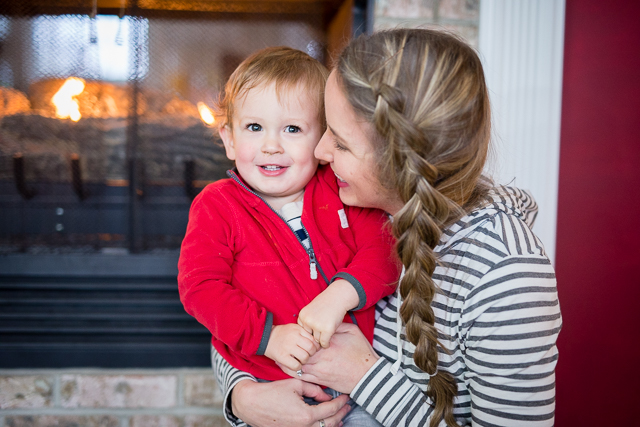 As I try to get in a bit more one on one playing time with Lincoln these days (it’s hard with two babies!), here are just a few tips for making the most of playtime with toddlers (a few we’ve been doing and a few I’m working on):

Sometimes I’m tempted to keep things moving along but follow your toddler’s lead and go as slow as they’d like. If they’re content pushing the car around the living room, do it with them for as long as it holds their interest.

A lot of the time they’re doing things over and over to practice getting it right and to be able to do it independently. Building the tower over and over again is less fun for me, but it’s helping Lincoln’s hand-eye coordination and encouraging independence when he finally gets it right.

I’m quick to help Lincoln when he doesn’t get something right away but I’m trying to be intentional about letting him struggle. I use the time to encourage his efforts verbally instead of helping his little fingers complete the task. Letting toddlers accomplish tasks on their own gives them a strong feeling of competence, something to encourage.

Be Mindful of the Enviroment:

Every toddler is different, but I find Lincoln plays much better in an orderly space. I’ve started organizing all our toys into bins and when he’s done with one set of toys, he needs to put them back in the bin to be able to take down another. I’ve found it results in a longer time playing with each given toy…and a much cleaner space at the end of the afternoon.

There’s a balance between showing your toddler the way to do things and letting him explore objects and activities. I try to begin by just letting Lincoln explore new toys, seeing how he thinks they should be used. After a few minutes I’ll show him an alternate use for them and see how he takes it. For example, initially he wanted to line up all the DUPLO blocks in a line across the floor. After a few minutes of lining things up, I showed him stacking and then let him take a turn of building to see where he took it. Demonstrating new ways to play with the same toys is a great way to stretch toddlers’ imaginations but it’s just as important to let them take the creative lead.

Pin these tips for later + share them with other moms:

I was selected for this opportunity as a member of CLEVER and the content and opinions expressed here are all my own.