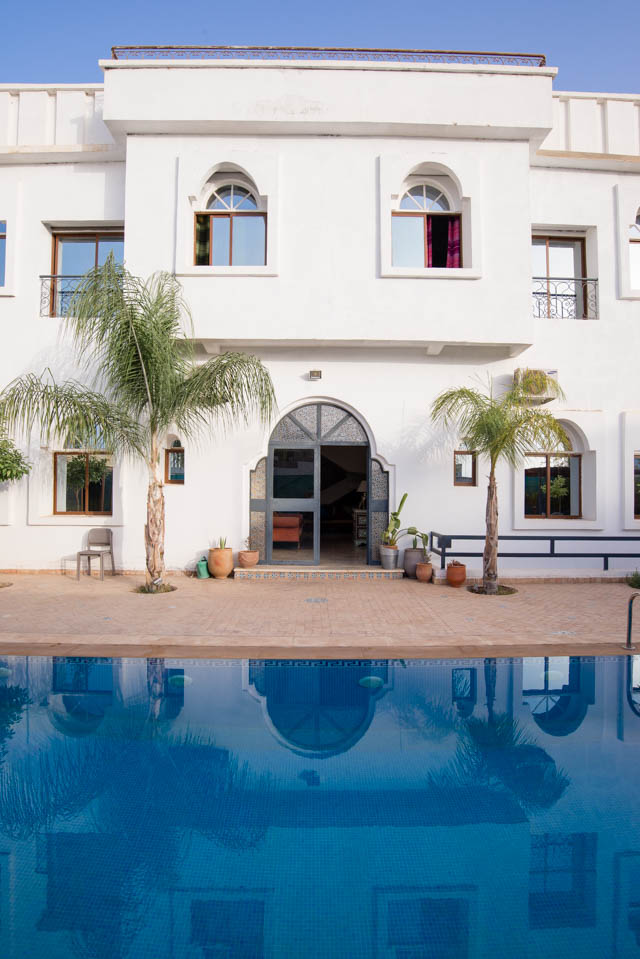 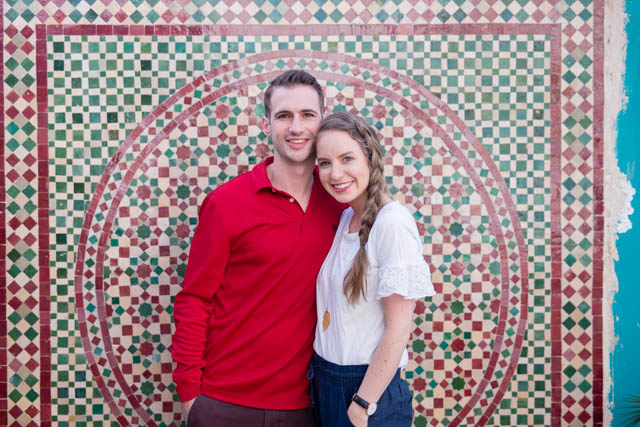 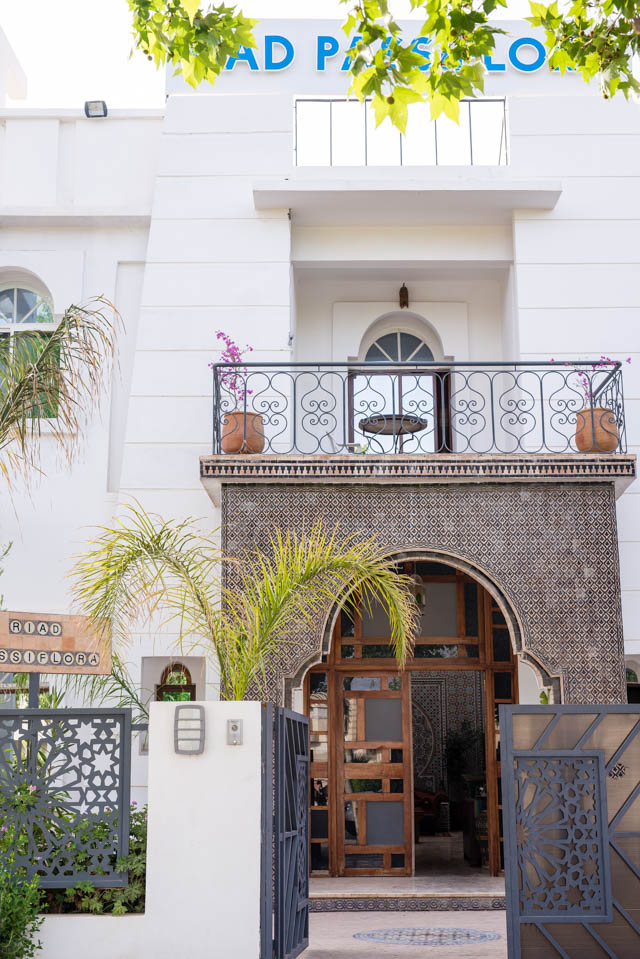 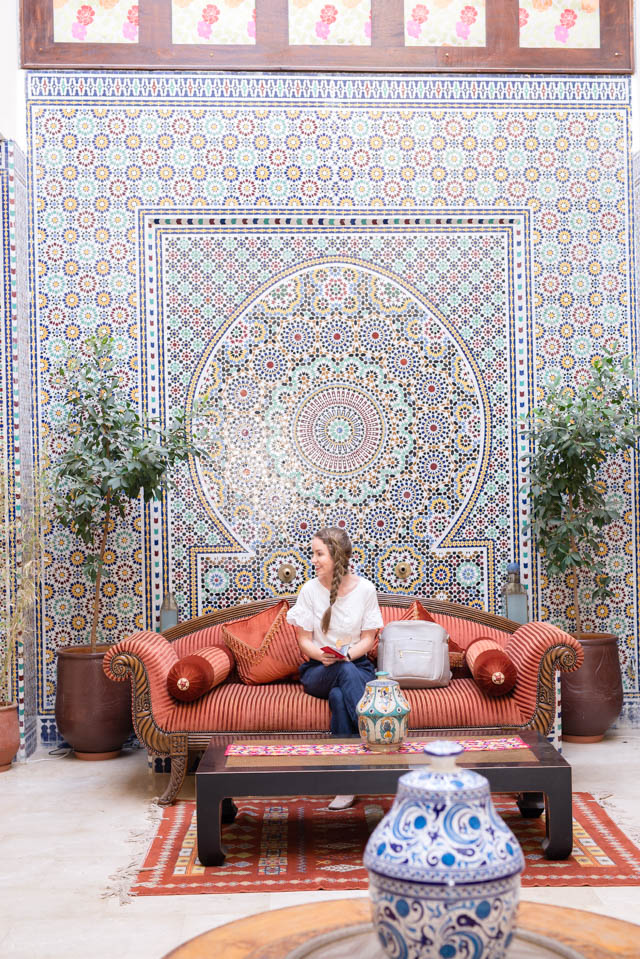 Last Spring we spent a magical three days in Morocco and I still have so much to share from that trip! We visited Morocco on a bit on a whim – it was a country I’d been excited about for a couple of months but we ruled it out when flights were so expensive and Ben wasn’t as thrilled about the destination.

And then our plans for another climbing trip in Mallorca fell through and we found ourselves with a week of vacation, childcare, and no set itinerary. We scoured google flights for a few weeks before finding tickets to Barcelona for $415 and booked them almost immediately.

The next day, when Ben was at work, I was looking at travel options from Barcelona and found tickets to Fes for less than $50 a person for the middle portion of our trip. It was the only time I’ve booked plane tickets for another person without consulting them first.

Anyway, that was a longwinded way of saying we ended up there for three days and I was in charge of planning fun things to do in Morocco. The main portion of our time was spent on this two day desert excursion I shared all about in this post (Moroccan Desert Tour from Fes part 1). Before we headed out on the desert tour, we spent one night at a guesthouse in Fes, close to the airport.

Things to Do in Morocco: Moroccan Riads

In Morocco, they do have western style hotels, but a lot of the lodging options are traditional style guesthouses called riads. A lot of them are old Moroccan homes that have been converted into these riad hotels, consisting of anywhere from 3 to 40 guest rooms.

We stayed in two different riads while in Morocco, at either end of our desert trip. The first one I picked because of it’s low price point (under $60 a night), proximity to the airport (we weren’t heading into Fes, just needing to be picked up in the morning), and beautiful mosaics. The second I picked at a much higher price point (although still under $200 per night) and location inside the old medina.

Things to Do in Morocco: Arriving at Riad Passiflora

We landed past 9pm in Fes and took an unmarked taxi from the airport. Walking out of the airport in Morocco was the most unsafe I felt the entire trip and we were just glad the driver dropped us off at the riad instead of … a lot of other things we were imagining as we drove, with no cell service, through the dark roads outside of Fes.

Upon arrival we spent a few minutes filling out our paperwork and the desk manager took our passports to document for their records (standard procedure at both places we stayed..and confirmed by everything I read online).

We were initially struck by how ornate and beautiful the lobby or central courtyard was! The mosaics! There is really nothing like Moroccan mosaics.

Things to Do in Morocco: The Accomodations

After a few minutes we were shown to our room by a Moroccan girl, who didn’t speak english and looked about my age. She used a large key to open the door to an upstairs room ….to reveal a room with SIX BEDS. SIX! We could have comfortably fit a large portion of our extended family in that room with us.

The beds were not particularly comfortable, and given how many there were, I was a bit skeptical about how clean the sheets were. The bathroom was clean but definitely not updated and I remember wishing I had a pair of flip flops to wear in the shower (kind of a concrete flooring).

But, after dropping off our bags, we headed down to the pool area where they said they were having a barbecue. There was a Turkish guest in town who wanted to grill for everyone and over the course of the next two hours we got to mingle (practicing my limited French and Ben’s fluent Spanish) with guests from all over Europe. There were five or so of us that night and our host made us all feel like friends (in fact, some of them were friends from coming so frequently back to this riad).

Speaking of our host, he is the reason to come to this riad. The beds (which might have been updated by now) are worth getting an inside scoop from Rachid. He’s been in the tourism business for thirty years and just started this guesthouse recently. My guess is 15 years from now Riad Passiflora will still be around with quite the reputation. If you’re touring Fes and staying somewhere else, you can also hire him as a guide for a day. He wasn’t available on our final day or else we would have done that for sure.

The following morning we had a quiet breakfast down by the pool consisting of some muffins, cream cheese, eggs, juice, milk, and a few other things set out we could choose from. We were joined by a few friends we’d met the night before and after snapping a few pictures, we packed up all of our things to be ready for our driver.

This was a great way to be introduced to Fes! The people were great and the lobby and pool areas were incredible. The rooms were not my favorite but a great budget find (especially if you need to sleep ten or fifteen people in a room ;). I’ll talk all about why I think you should stay in the old medina if you’re actually visiting Fes but if we were to go back, I think we’d stay here for at least one night again.

And a million pictures: 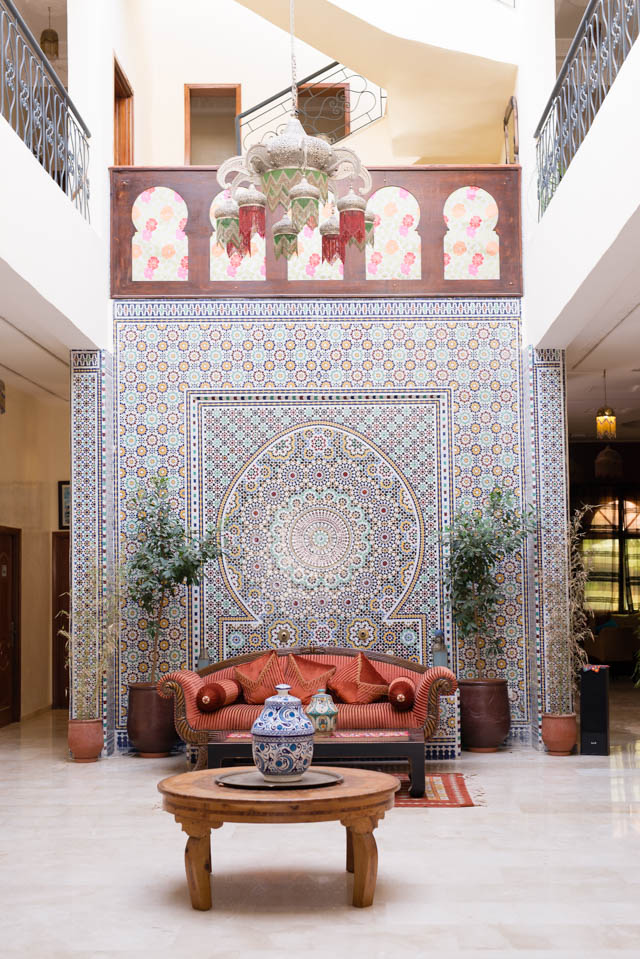 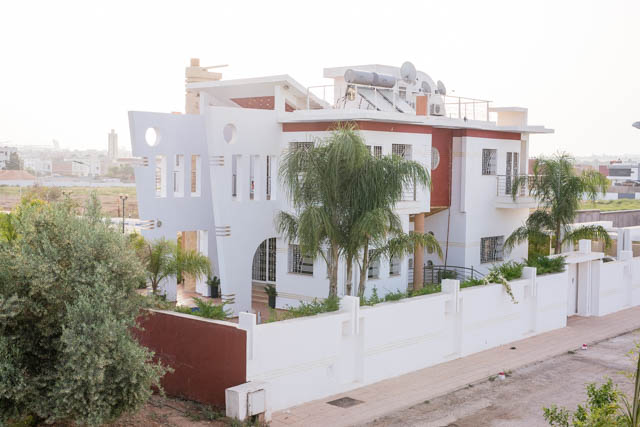 ^the view from our balcony 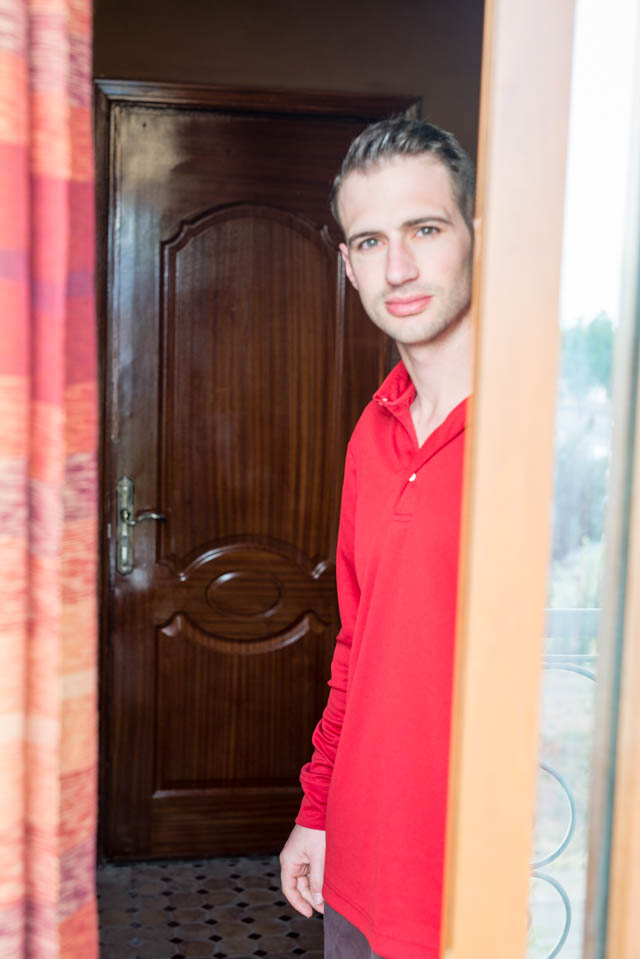 ^the door to our room 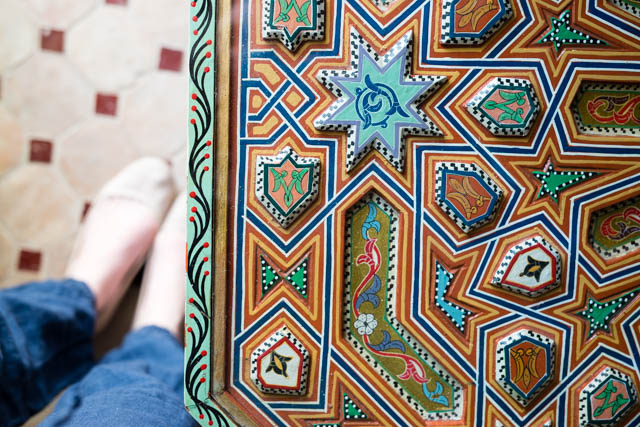 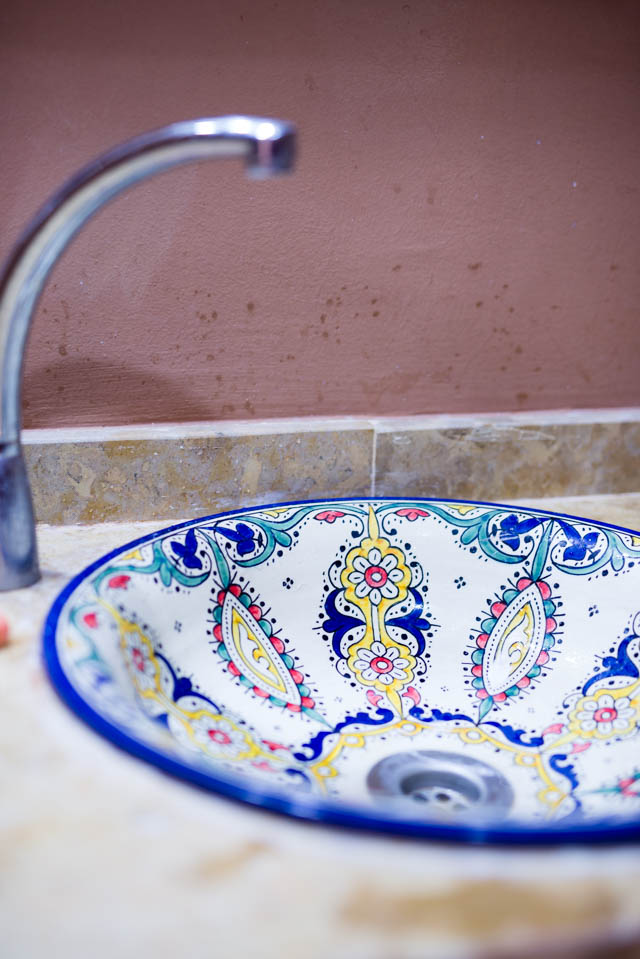 ^the sink in our bathroom! our room might not have been updated but the details were so gorgeous and authentic 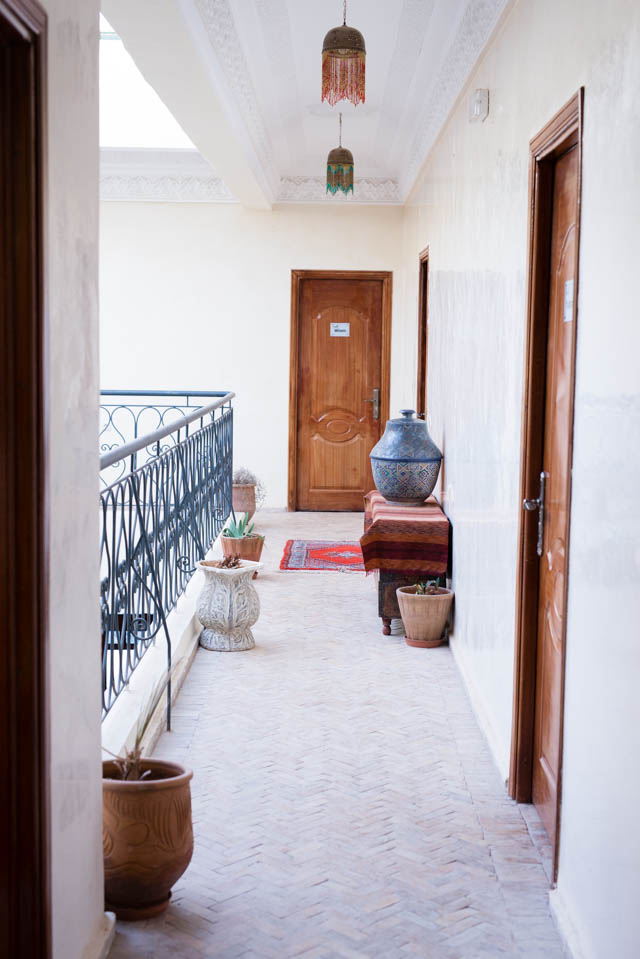 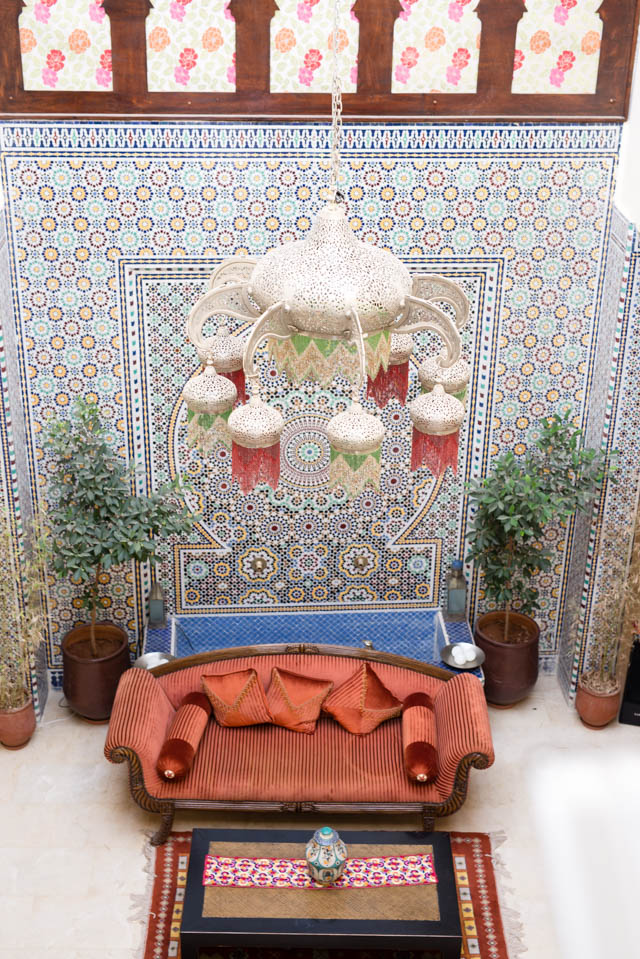 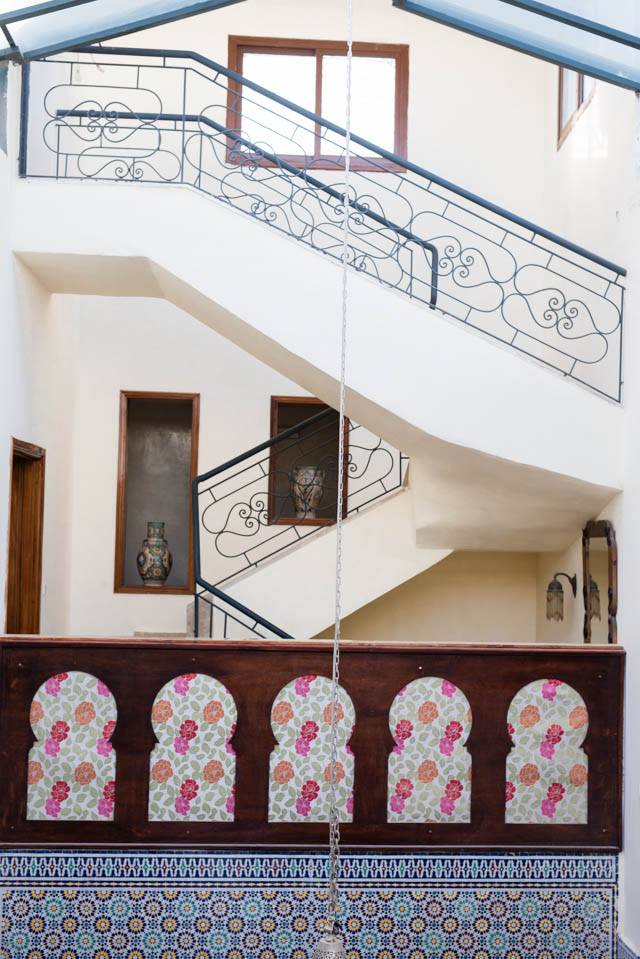 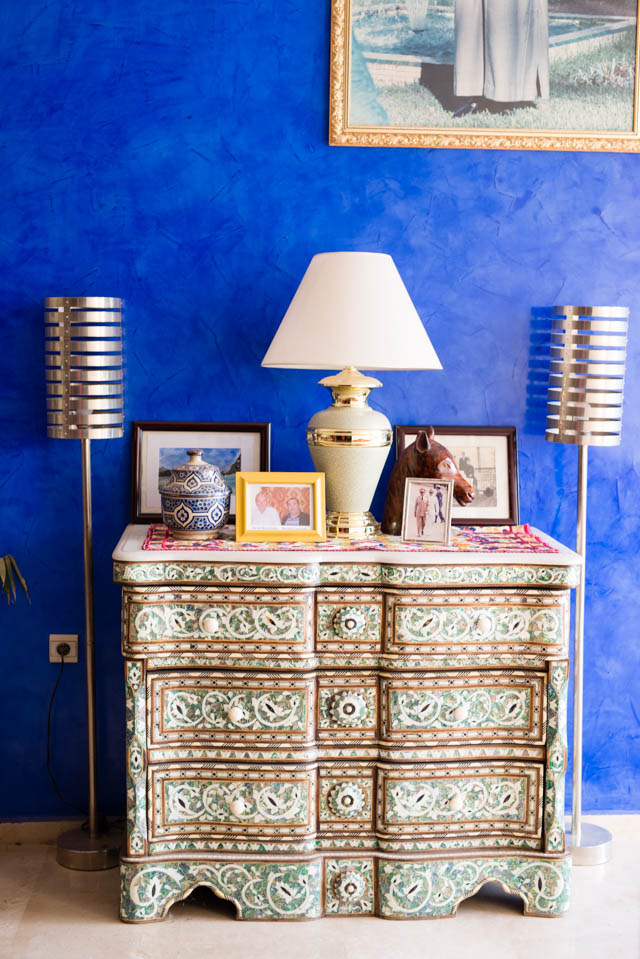 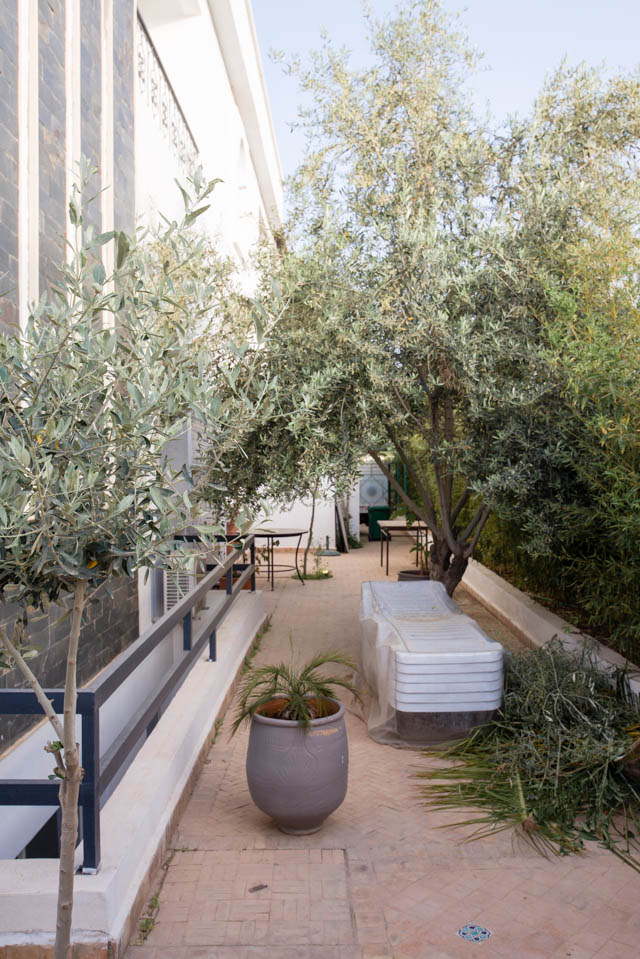 ^the back terrance off of the pool 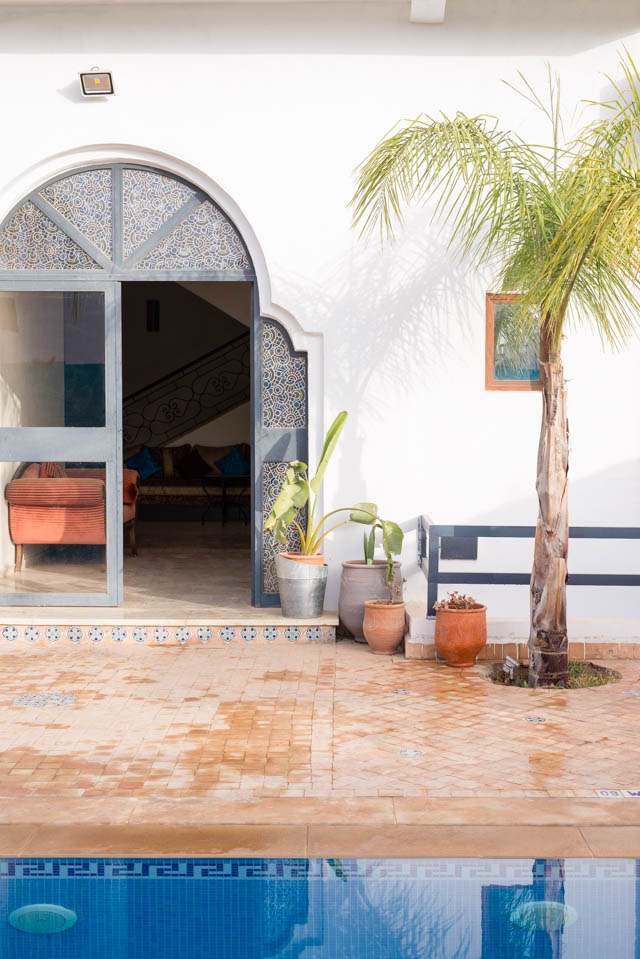 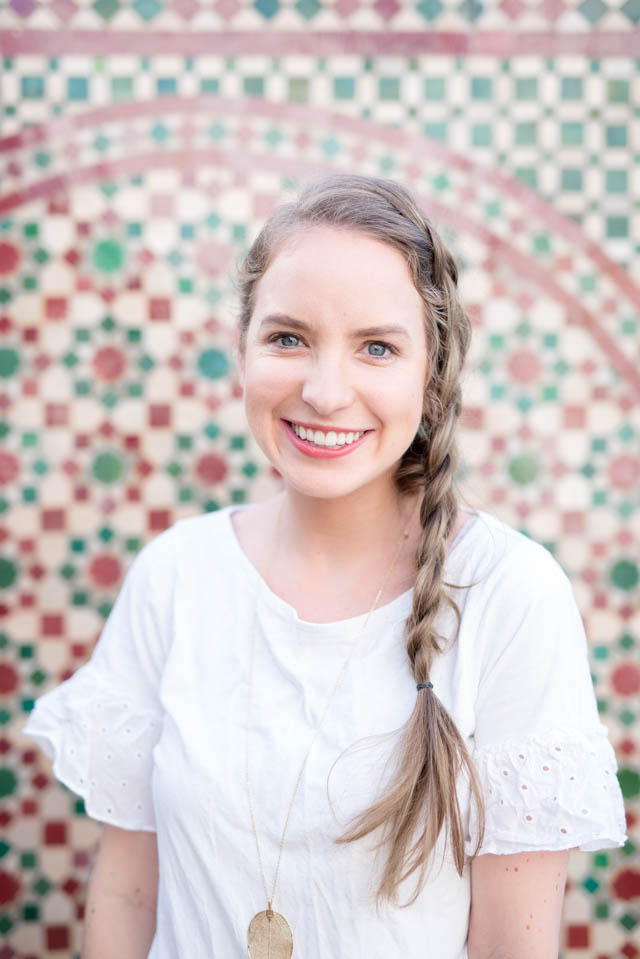 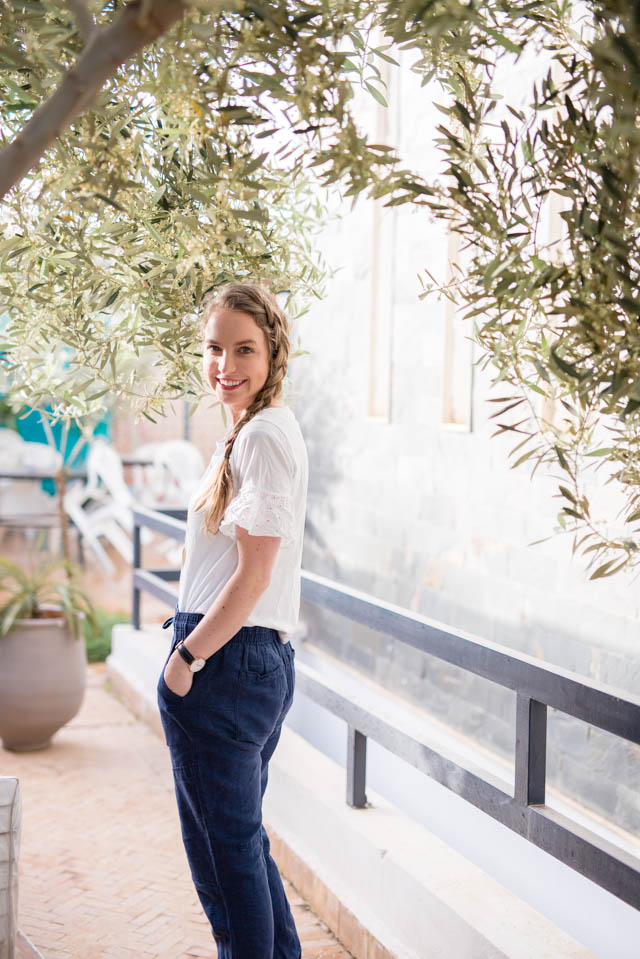 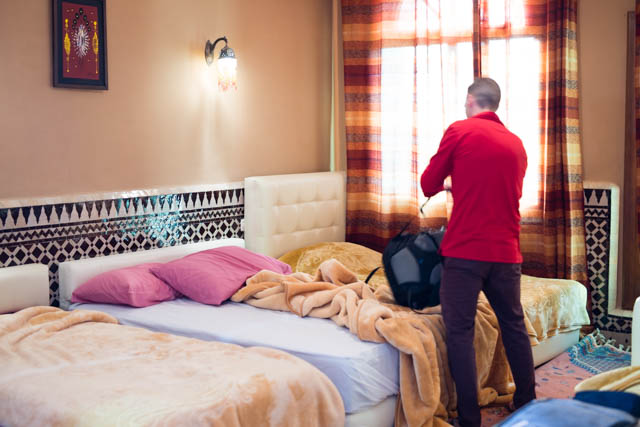 ^see HOW MANY BEDS were crammed into this room? but can you also see the beautiful mosaics all around the room 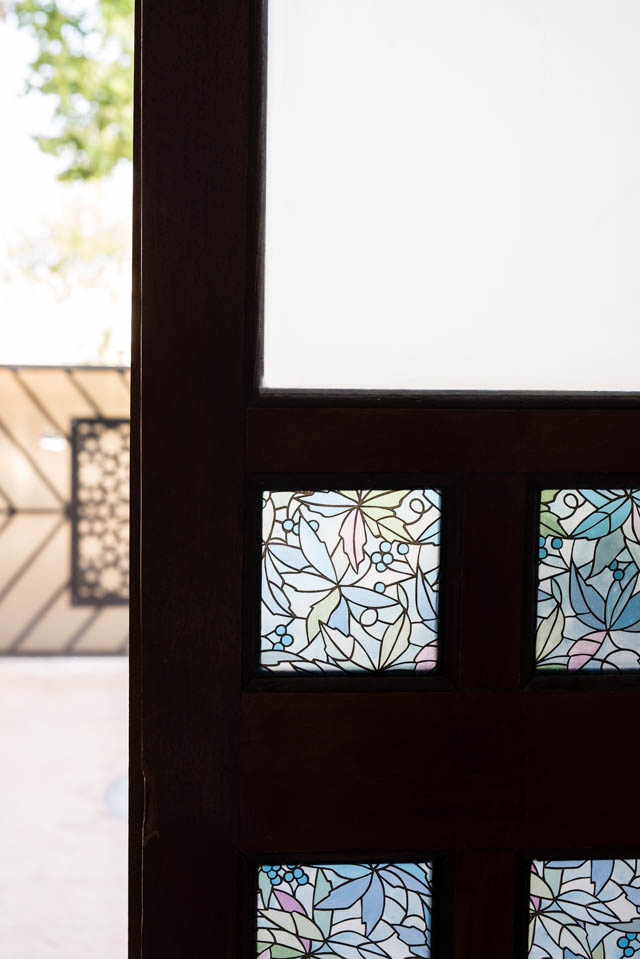 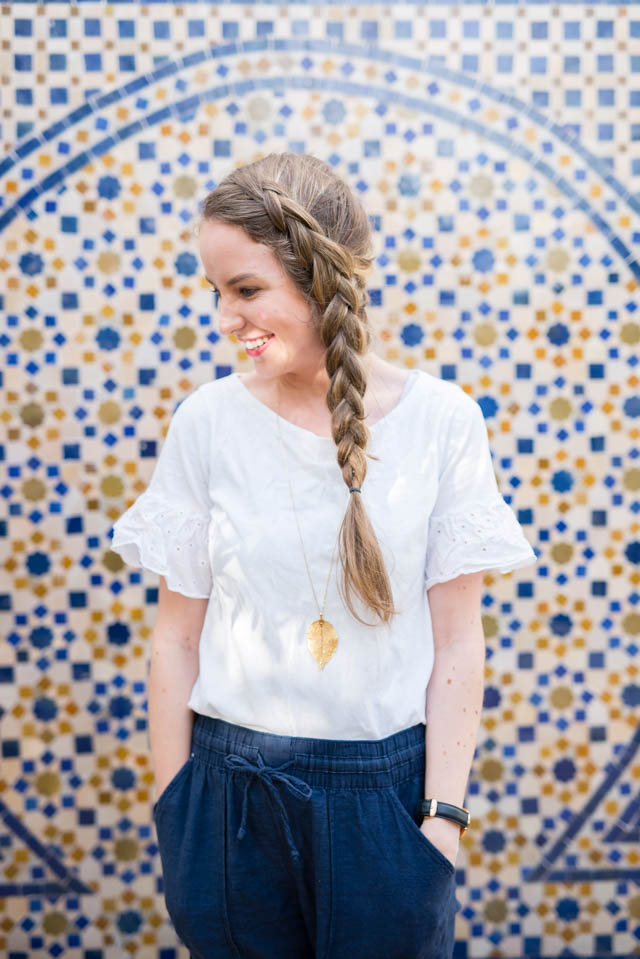 ^more mosaics out by the pool 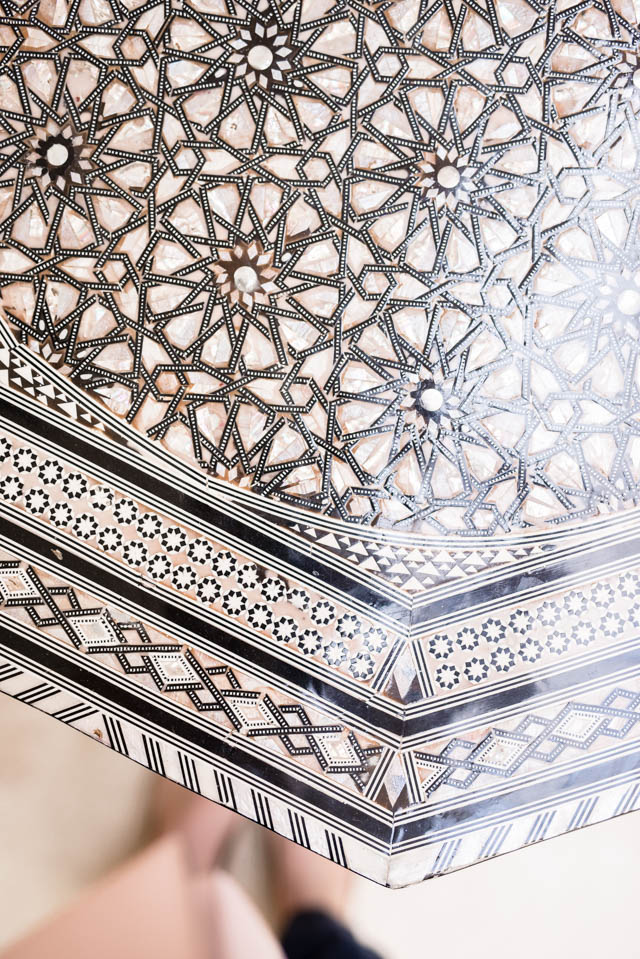 ^a little side table that deserved to be photographed 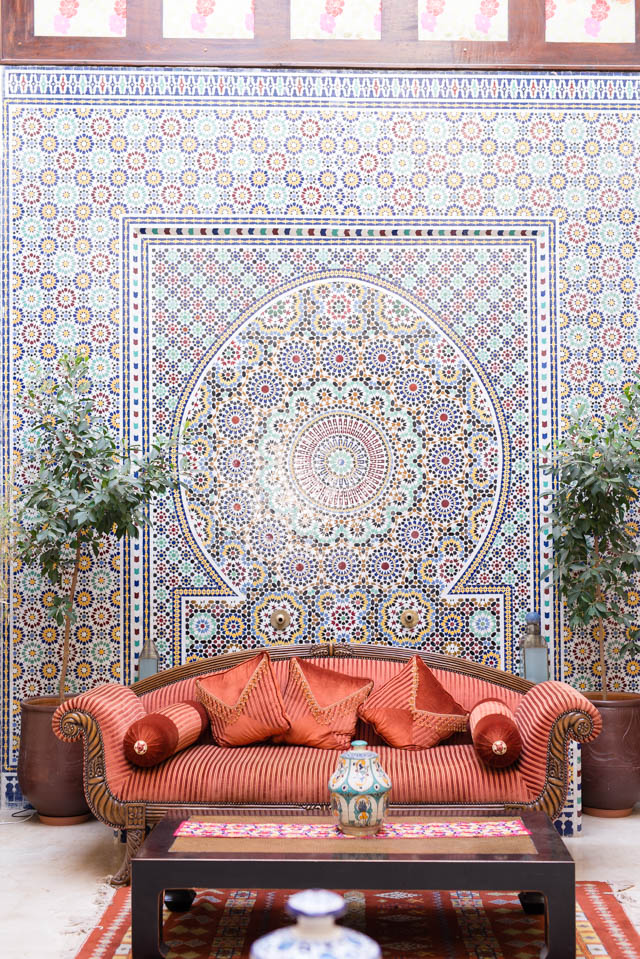 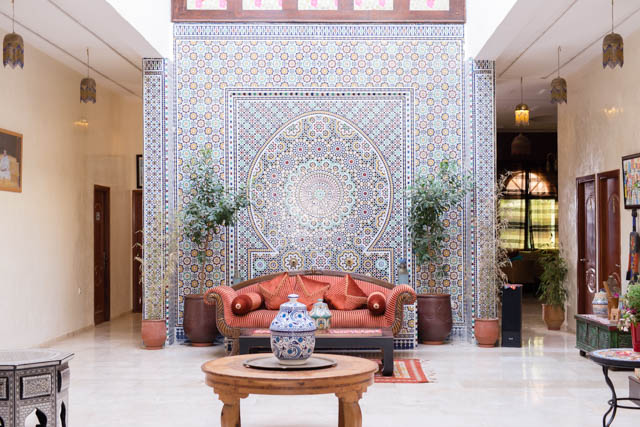 ^a bit more of a comprehensive look at the main room 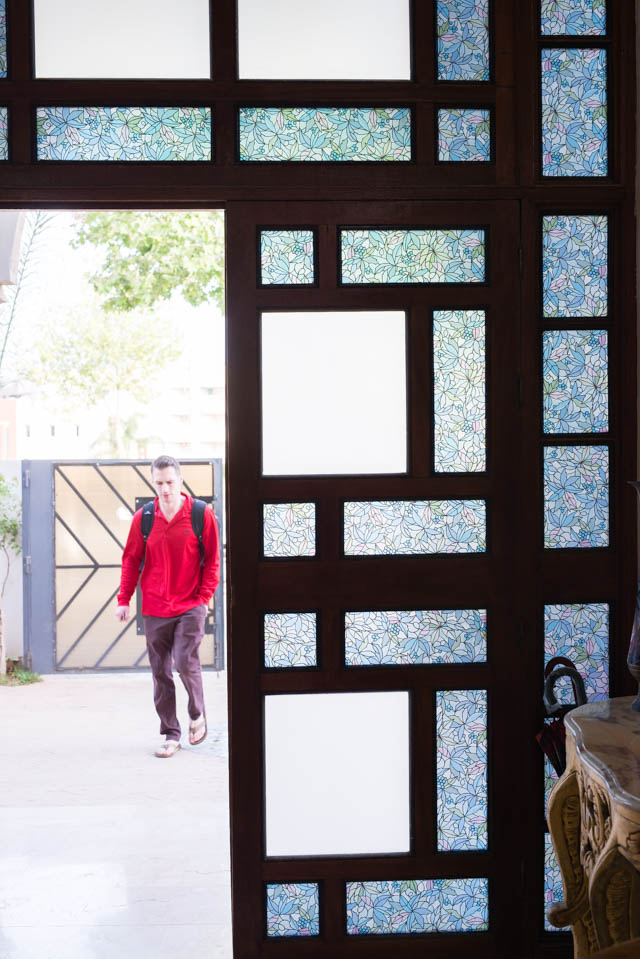