You are here: Home / everything else / Seventeen Pounds of Cuteness

This is the second part of our fun collaboration with Target Baby through Socialstars featuring spring clothes for our little Linc – you can find the first post with Dad here. #TargetCrowd 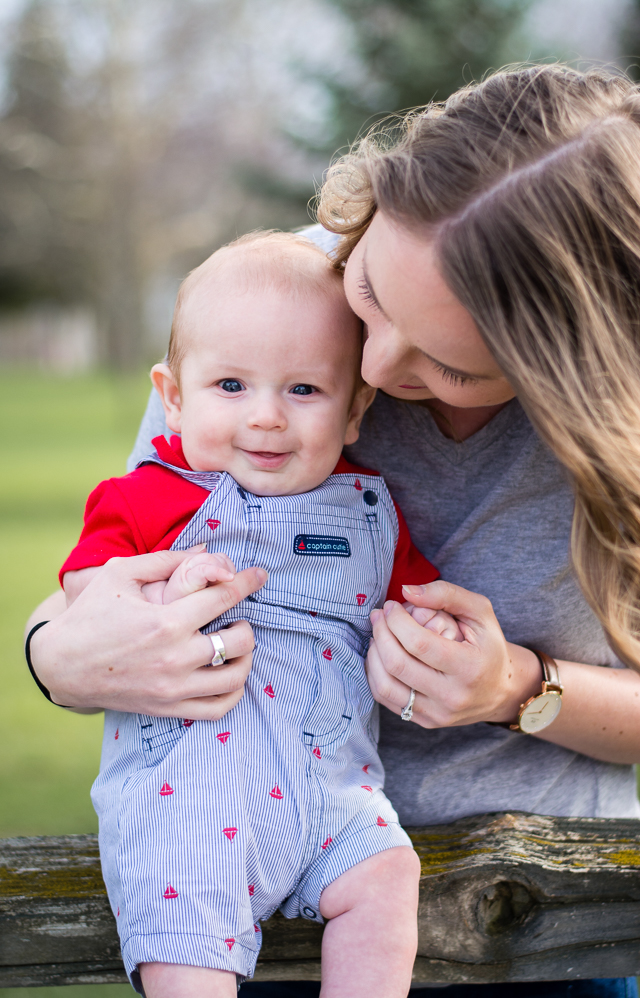 We have a three month old! Everyone was right, they do change so fast, and this mom is not complaining about it one bit. Each stage is better with this guy than the last and sleep is coming in long, long stretches (you know you’re lucky when nine hours is a short night). Here are a few little updates from Linc:

Weight: He is up to almost seventeen pounds and checking in at the 97th percentile. He was in the 95th percentile at his two month appointment so it looks like he’s still packing on the pounds. He’s already into size three diapers, and still in the 75th percentile for length. We celebrate the rolls around here (because I’m also convinced he slept through the night so early because he’s so big).

Sleeping: We’ve been working on going down for naps wide awake and letting Linc put himself to sleep and he’s been doing great! Every once in awhile he’ll fuss and I’ll have to come back in and settle him, but for the most part I put him down after 1:30-2 hours of being awake and he goes down easily. In the evenings, he goes to bed at eight after a bath and a bottle and wakes up sometime between 5 and 9 am. We count ourselves very lucky.

Sick: We’ve all been batting colds around here and sick babies are just the very saddest thing. Lincoln either hates having the snot sucked out of his nose or he giggles through it, but either way we’ve been doing a lot of that. We’ve also had him sleeping in the guest bathroom for the past two weeks and turn on a hot shower for the first 5 minutes of each nap. The humidity helps clear his nose and the sound puts him right to sleep. I’m beginning to think we should just have him sleep in the bathroom permanently 😉

Favorites: Lincoln loves when we touch his face (how is he related to me?)! The most consistent way to get this little one to smile is to touch his cheeks, his nose, or his mouth. He also loves to stick out his tongue, especially if you’re touching his face. So his natural response to me going to kiss him? Stick out his tongue 😛 It is so fun to watch him become more responsive and his little baby giggles – they’re almost too much. He also loves bath time and having no clothes on (whether for bath time or an unfortunate diaper incident).

Dislikes: We’re still working on the car seat in the jogging stroller for walks. He’s a huge fan of our baby wrap, but walks in the car seat are a hit or miss. He also really dislikes tummy time. He sleeps on his stomach (I know, I know), and has very strong neck/back/arm muscles, but if we put him on his stomach during the day he doesn’t have any of it.

Stranger Danger: One of these days Lincoln will recognize his parents and let us know he likes us more than whoever happens to want to hold him. But for now, he’s content with just about anyone 🙂

My Favorites: Some of my very favorite times with Lincoln are right after he’s done eating after waking up from a long nap. I’ll know he’s finished because instead of sucking, he’ll be sitting there grinning with the bottle in his mouth. He’s happy to sit and “talk” to me for awhile and there is little that makes me happier than watching his personality shine through.

The other night we facetimed my brother in Hawaii for the first time and Lincoln was a little giggly flirt through the whole call. If you follow Linc on instagram, the most recent bath time video is from a few minutes after and its my favorite yet! 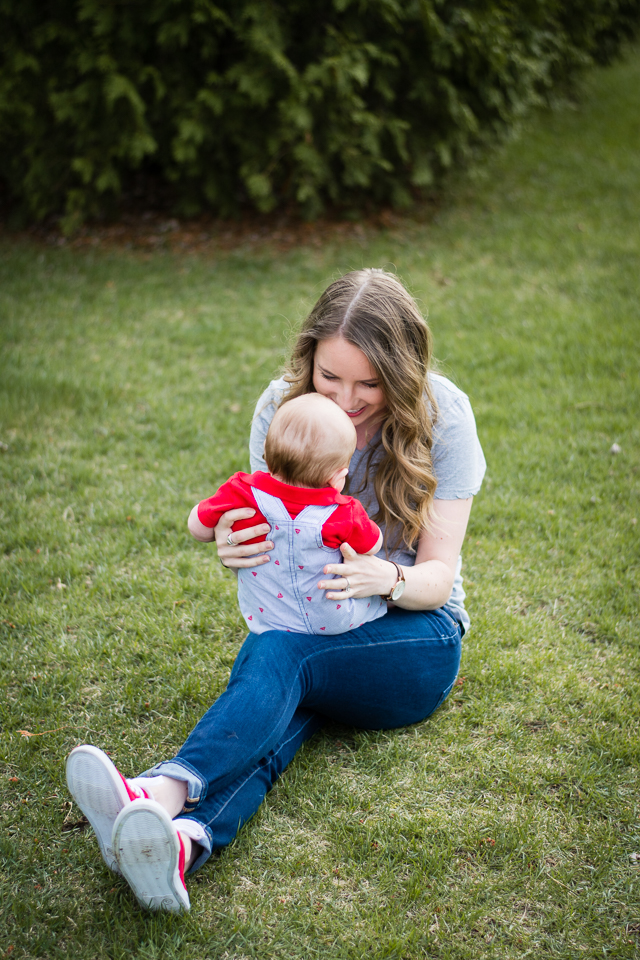 Also, I’m loving this little outfit from Target. Yesterday I shared some of my favorite shots of Linc with Dad and talked about how much we love Target for all things baby. They have so many darling options that are affordable and convenient (because I can pick up his bottle liners, his diapers, AND new clothes in one trip). I love the little sailboats on these overalls,but I really love that his polo is a little red onesie because at his size, onesies just say on infinitely better than shirts. Plus, for me, baby clothes are all about texture. If they’re up against Lincoln’s soft new skin, I like to find things that are soft and comfortable. Here are lots more pictures of spring with this chunker: 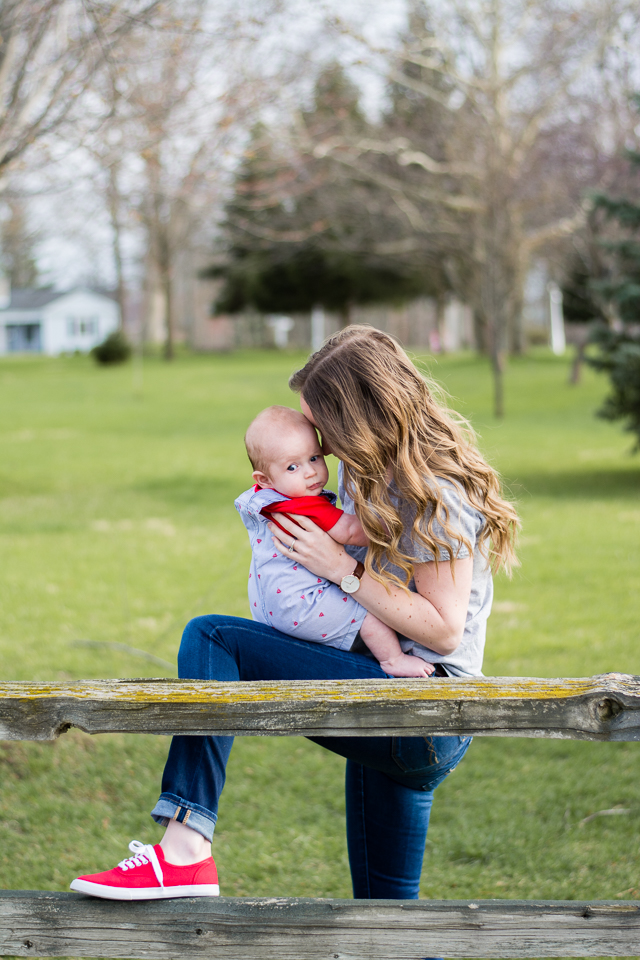 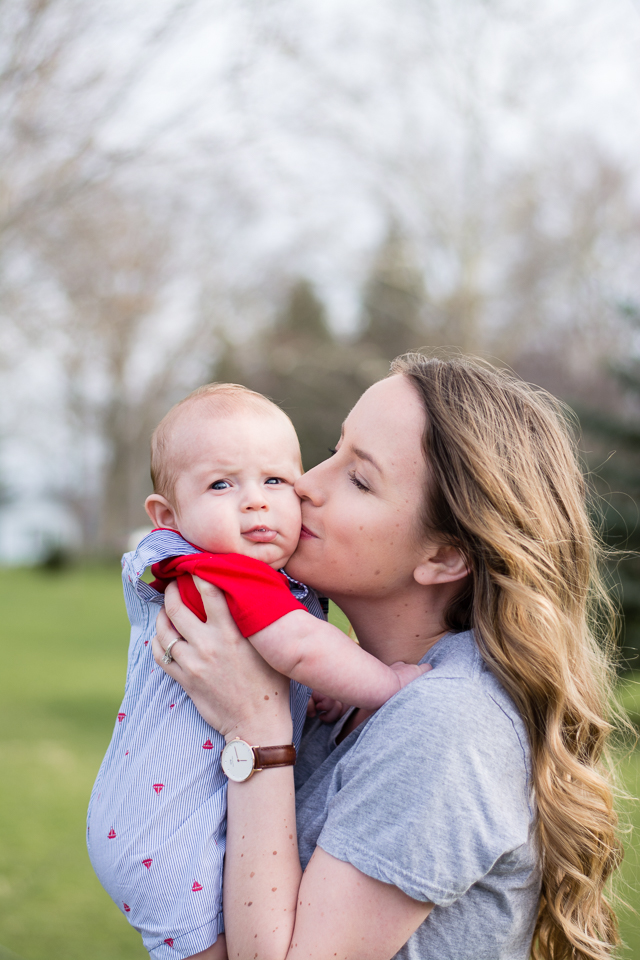 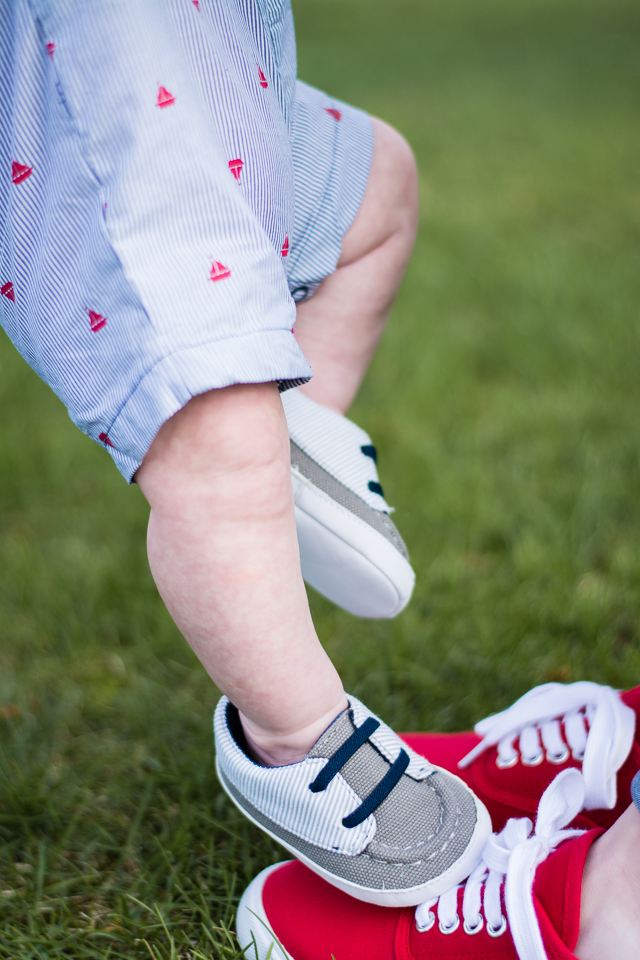 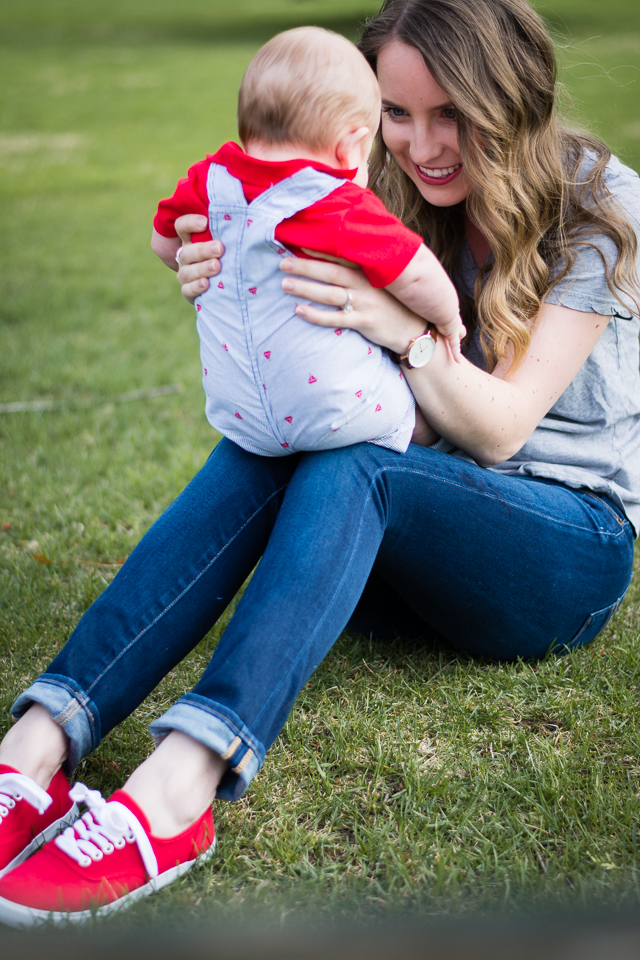 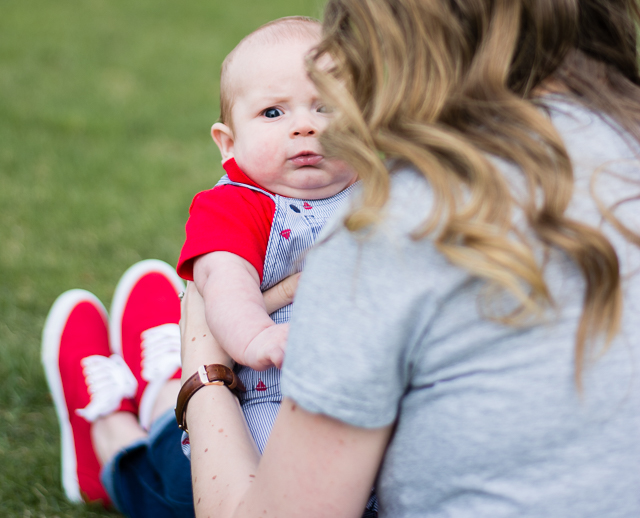 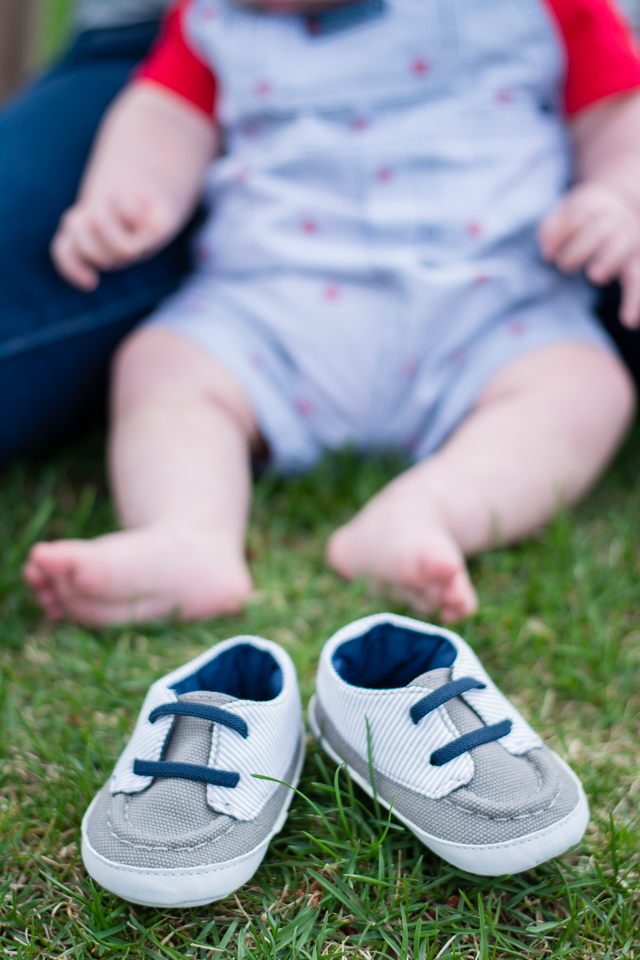 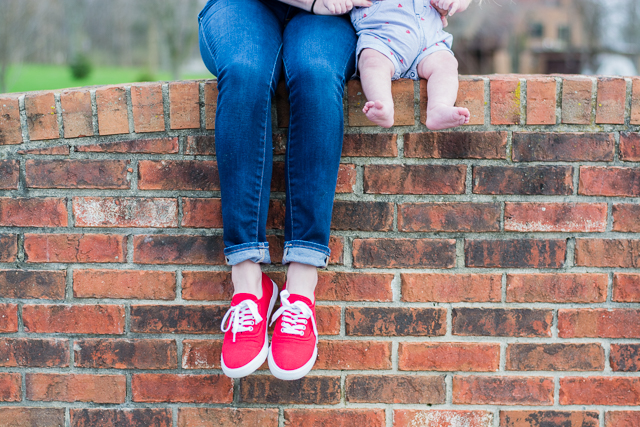 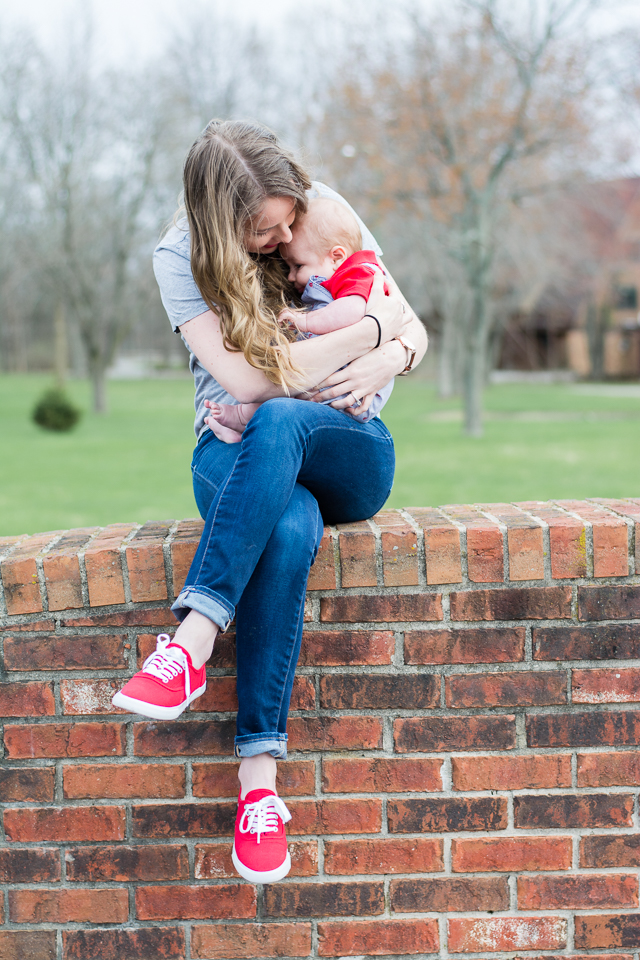 And because I couldn’t resist a good diaper shot – here’s one from a few of the three month pictures I took of Linc – what, you don’t walk around in accessories that match your patterned underwear? (bow tie diapers are the new Honest Company’s exclusive print for Target). 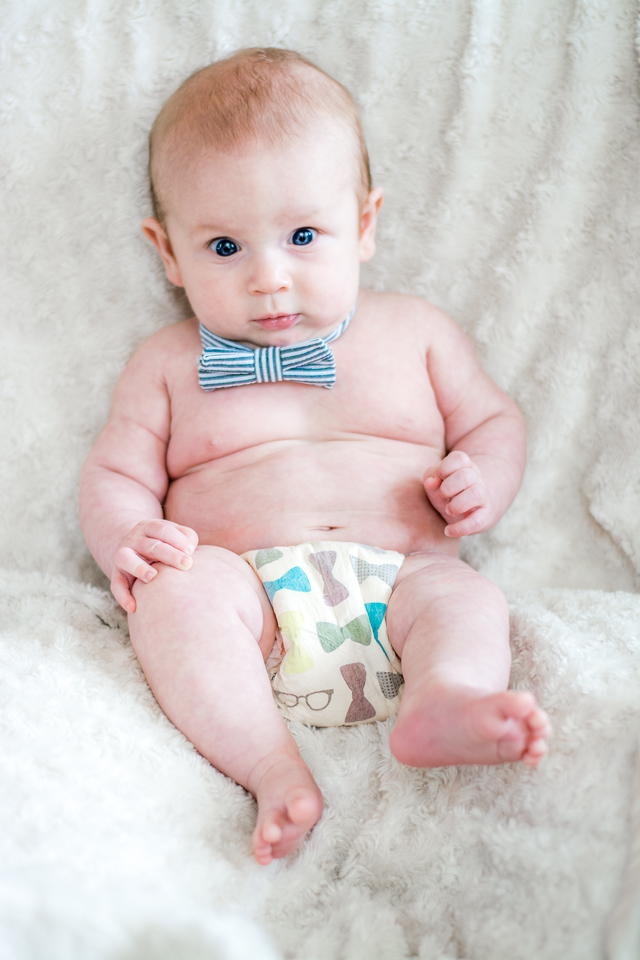