You are here: Home / motherhood / 9 Strategies for Toddlers who are Picky Eaters

This post is sponsored by Mott’s®. All struggles with picky eaters (and opinions) are my own. 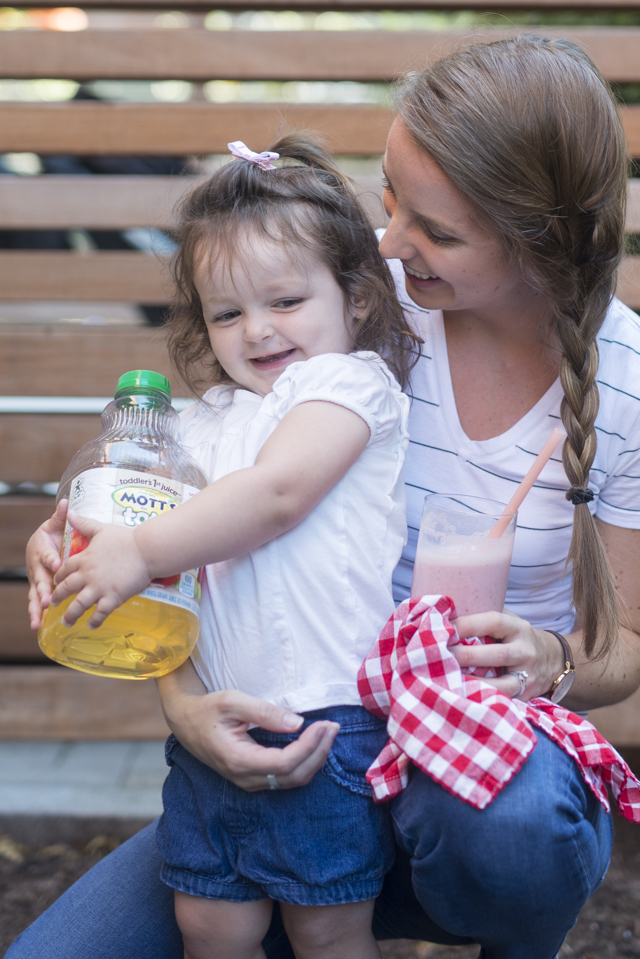 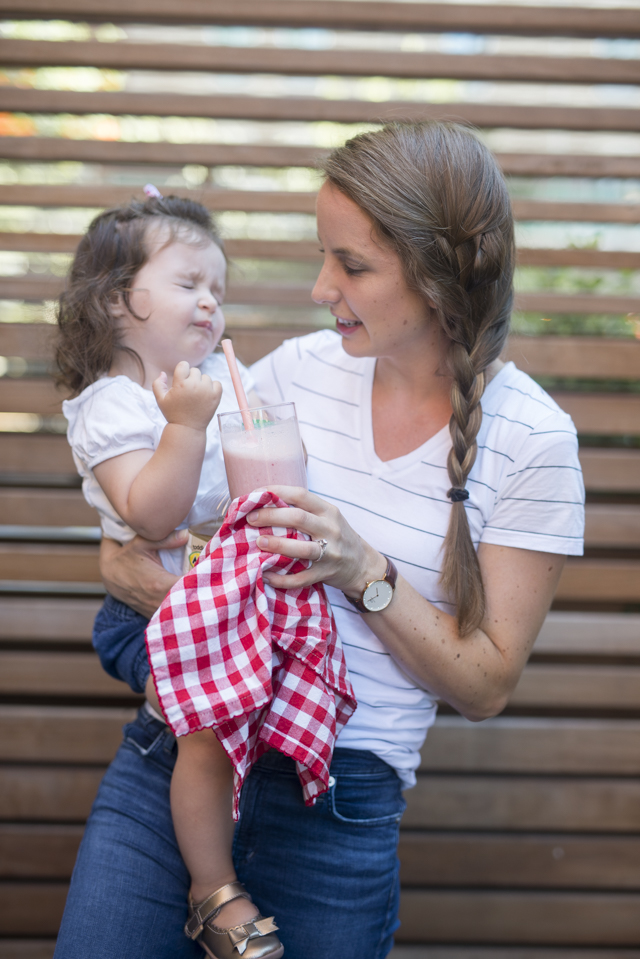 ^Adelaide before trying the smoothie "There is a new, possibly delicious, substance within two feet of me and I'm not feeling it." 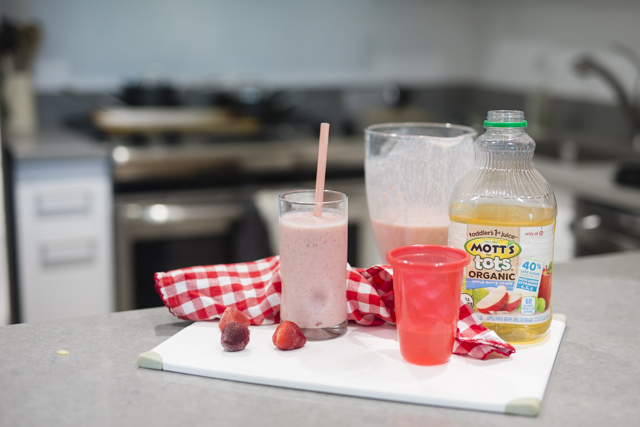 The struggle of picky eaters

Raise your hand if you struggle with a picky eater. My hand is high up in the air.

Feeding my children, from my horrid nursing experience with Lincoln to this picky eating toddler stage of Adelaide, has always been one of the most difficult parts of motherhood. Finding, preparing, and serving healthy foods three to five times a day is hard enough....and now toddlers decide to HAVE OPINIONS about it?

My oldest is a champion eater. Last weekend we were meeting up with friends in Harvard Square for dinner and I asked if he'd rather have a hamburger from Shake Shack or a salad (that I was grabbing at Sweet Green). He deliberated for a few minutes and picked (and then ate) a salad.

Adelaide opted for  a granola bar, and goldfish. I also included in there our new favorite Motts for Tots Organic Apple White Grape Juice, which I had packed earlier for a nice new surprise.

I blame it mostly on myself. Adelaide's prime time for introducing new foods was during the months we were packing up, selling our home, moving across the country, living with my parents, and then moving into our new student life here in Boston. I was not nearly as meticulous about introducing new flavors and textures each day as I was with my firstborn. But Adelaide is also stubborn, opinionated and defiant in ways her brother never was. So maybe it isn't entirely my fault.

And I've been getting desperate. I've subscribed to a million newsletters promising "the secret for getting your picky eater to eat" and scoured Pinterest and podcasts for ideas. I've listened to audiobooks looking for tips and suggestions and talked to other moms to see what's been working for them.

Some of the strategies we've already started, but mostly I've just been compiling info and coming up with our game plan while I build up the mental stamina to implement it all. Luckily it seems less scary than I thought (no showdowns at the dinner table with crying babies here).

If you have a picky eater, here is what I've learned:

As parents, we have two jobs when it comes to what our kids eat. It is up to us to create a positive environment for them to eat in. We are responsible for making mealtimes happy and calm, without stress and pressure. Our second responsibility is to provide healthy foods at meal times (and designated snack times).

Our child's responsibility is to determine how much (or if) they eat.

Sounds simple, right? Just focusing on this has been really liberating so far. If I put a plate of healthy options in front of Adelaide and she eats only one of the five things on her plate, I have done my job. I can call dinner a success (I don't always...but I should).

Here's what we can do: 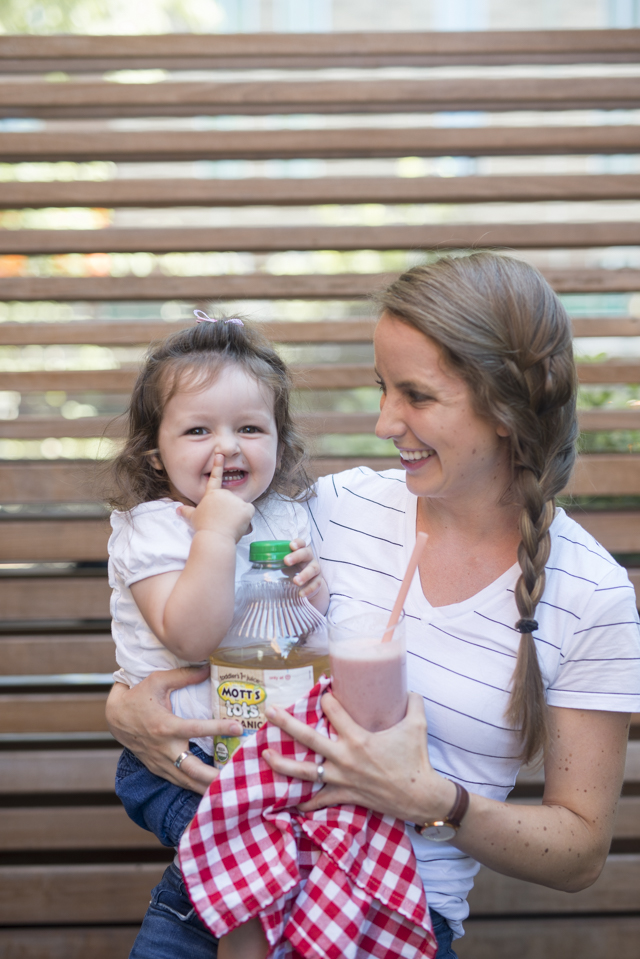 Tips for feeding toddlers who are picky eaters

When you put food in front of your kids, keep it calm. Don't make a big deal about what the food is. Keep the focus on the conversation. Try setting the plate down at dinner and asking about the game they were playing that afternoon. It keeps mealtime pleasant and shows you don't have a huge interest in whether or not your toddler is eating.

If they don't eat, keep your voice steady as you remind them they don't need to eat, but that there won't be any more food until the next meal or snack time.

2.Try new foods in the morning

This idea is new to me but it makes so much sense. The evening, especially dinnertime, is when my toddlers are the most cranky. It is close to bedtime. They're tired, hungry, and usually a bit upset at having to stop whatever they were playing.

Try introducing new foods at a time of day when they'll be more willing to try something new. Maybe it's breakfast. Maybe it's the snack after nap time. It's likely your kids don't have your same "cucumbers are NOT a breakfast food" mentality yet, so don't worry about keeping things aligned with traditional meals.

I have taken to the advice of serving one thing each meal that I know my child will eat. For Adelaide, this usually means a side of black beans or a piece of bread and then small portions of whatever else we're having for dinner.

I do make sure to give her small portions of each new item on her plate, served alongside the tried and true. It gives her the option to eat it, and even though I usually end up tossing it or eating it myself at the end of the meal, every once in awhile she surprises me by what she tries.

Whatever you do. DON'T force it.

I've also read not to bargain or plead with your kids. With Lincoln a "take three more bites of chili before you have more cornbread" worked wonders but with Adelaide it doesn't at all.

Also, if your child doesn't seem to be hungry, don't force the meal or snack. You risk them associating meal time with a power struggle or anxiety and being less sensitive to their own fullness and hunger cues.

When things are tough, remember your ultimate goal isn't to have your child eat that meal, but it is to have your child grow into a healthy eater. This perspective helps me chalk up calm, happy mealtimes where Adelaide ate next to nothing as wins. It is also helpful to remember that toddlers (and kids in general) are not consistent eaters. They often go through days of eating a lot, followed by days of eating very little. Teaching them to listen to their body is a big part of having them grow into mature, healthy eaters as they get older.

Research shows that it may take up to ten (more more!) exposures to new foods before children try them. So keep putting those small pieces of broccoli on her plate, even if she hasn't eaten them the last three times you've done it.

You can also encourage trying the food by talking about the color, shape, smell, or texture of the food (instead of whether or not it tastes good). This helps kids focus on the sensory experience of eating the food and be more okay with the newness of it.

Allow your child to interact with their food even if they aren't eating it. They might touch the food the first time it's served and not taste it until the second or third. Remember, your first job is just to create a positive environment for them to eat (or not eat).

8. Get your little eater involved

Whenever you can, get your picky eater involved in the process. Let them pick out vegetables and fruit at the grocery store. Let them cook alongside you or show them the steps as you prepare dinner. They are more likely to want to try food they feel invested in.

If you have found something your picky eater loves, try slight variations. You can serve the same thing a few different ways or alter the flavor of a tried and true favorite.

For example, if your toddler loves corn, try serving corn on the cob, creamed corn, corn chowder, etc. They might be more willing to try something new when they already have a strong positive association with the base.

Alternatively, take something they love and vary it slightly. For us, it's smoothies. Adelaide loves smoothies and will always try something that comes from a straw. We've slowly adding in new things to smoothies to see if she'll like them. Often, the first time we try a new flavor she'll try it and then reject it but I'm hoping that as she keeps trying it, we'll add more things to her limited list.

One way I've been doing this is just buying alternative flavors of things she likes. Instead of just apple juice, I've been picking up the new Mott’s® for Tots Organic Apple White Grape Juice. It introduced a new flavor that she is always a tiny bit hesitant about but then will keep drinking! 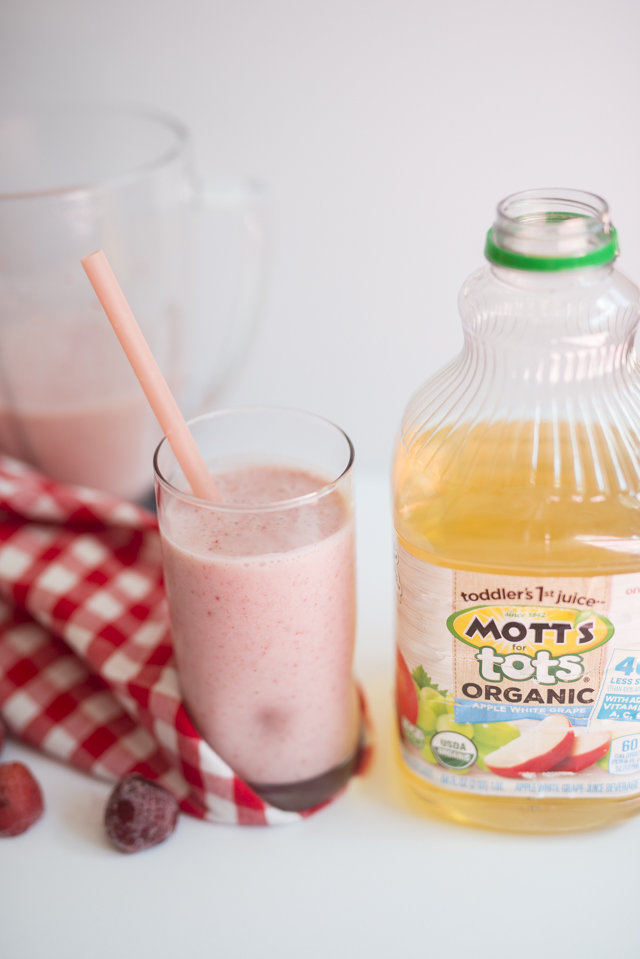 Where we stayed in Mykonos
Next Post: Best Prime Day Deals! »