You are here: Home / everything else / What Can Happen in a Year: The day I met Ben
1 Year Ago Today…..
I was first introduced to the love of my life. 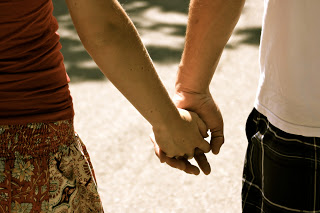 I’ve shared part of this story already here, but for documentation purposes, and all those who haven’t read it…I wanted to get down everything I remember about that first day.
December 6 was a Monday last year, and our congregation had a Christmas activity scheduled for the evening. The night included an ugly sweater contest, lots of treats, and a few other fun activities. I remember running late so I hadn’t even really thought of an ugly sweater (a friend let me borrow his for the pictures) and was dressed in a black gap v-neck and american eagle jeans with a red plaid scarf. I had just come from dance and wasn’t feeling all that hygenic or attractive (you know how those days are) and if it hadn’t been for my mothers mantra of “we support church activities,” I might have talked myself out of going to this one.
But I didn’t. And it was fun. I talked to friends, ate lots of food, and put off doing a huge of homework. Towards the end of the evening, as we were staying to help clean up, there was a boy on a ballroom team who practiced my waltz with me. We spent awhile waltzing around the floor as people moved out tables and it was right as we finished I noticed the music coming from the piano.
It was incredible. I have an uncle who is an amazing pianist, but other than him, this was the most talented piano playing I’d ever heard (and I’ve taken piano since I was 5). I was surprised to see a boy sitting at the bench, but refrained from letting myself give it a second thought when I noticed my friend hovering over the piano, smiling and touching her hair. I’d gotten enough grief about going on a lot of dates recently that I did not need to look like I was flirting with someone my friends were interested in.
As the music stopped the boy walked across the room. I have to give compliments where they were due. I told this dark haired boy how incredible that was, and he took the opportunity to introduce himself. His name was Ben.
That was it. I gave him my name. I made a conscious effort not to be flirting. He continued to talk to some of my roommates for the rest of the night. I finally went home, had my roommate change my facebook password, and buckled down to the enormous load of homework.
Wednesday, when I checked my facebook again after getting the bulk of that homework over with, I had a friend request pending…from a Bennythejet Gringeri? To be honest, I had no idea who it was. I accepted and stalked to the profile pictures to figure out who it was, and was flattered when I realized it was the boy from Monday night. To my surprise just a few minutes later he facebook chatted me. He was a chemical engineer from Northern California. He had relatives in Massachussetes and always wanted to do an internship in Boston. We talked for awhile…maybe 45 minutes?
side note: the atmosphere in my apartment that night wasn’t super pleasant. One roommate was sick, one was helping her feel better. Two more were complaining and one was giving me a lot of grief for having a conversation with a boy a friend might like.
At the end of the conversation he asked if I’d gotten his message. He had to run to a study group (later I found out he had been rather late because he was so excited to be talking to me). I didn’t get what he meant at first, but ran to the other room to check my phone. Sure enough, a missed call.
Our first date was set for that Friday.
side note: I felt so uncomfortable in my apartment that night I spent the rest of the evening at my cousins (I was happy to find out later one roommate really was sick and actually wasn’t mad at me). Oh and other fun fact, when we started dating they gave us two weeks till we broke up – in a joking way of course (we were an unlikely match to say the least :).
The rest of the week:
Thursday: Movie night with his apartment.
Friday: First date of decorating gingerbread houses.
Saturday: Tumbling gym with his apartment.
Sunday: movie with him and his friends.
Monday: icecream with both our apartments to celebrate finals.
Tuesday: he came over despite the fact I had a huge final
Wednesday: second date of a concert in an art museum
Thursday: that morning I flew back to NH, wondering how I’d seen this boy everyday for the past week and a half….
You can read the rest of our story here…
It’s also fun to look at my blog post from that day here (I love that the title is Happy, Happy, Happy!)
But its crazy for me to think now that I have just known Ben for a year.
Its incredible to realize how much can change, and how much can grow in just a year.
It is wonderful to think how many years we have left.
Yes, it was fast. But yes, it was also right.
Dear Ben, thank you for such a wonderful year. Thank you for your love, kindness, and support. Thank you for being my best friend and my husband. Thank you for putting up with my through it all. Thank you for being the one I love.