You are here: Home / everything else / Tuxedo Fittings…
Last week I took Caleb to get fitted for his tux for the wedding.
The woman was slightly frustrated until she found out I was the bride – then she was as sweet as can be (and turned out to be really great).
Exactly a week later I was back at Mens Wearhouse to get my father fitted as well.
A few things of note:
MensWearhouse was EXTREMELY busy tonight
There were another three brides in the store, some with, and some without their fainces
every single one of them looked about a decade older than me (which they probably were) 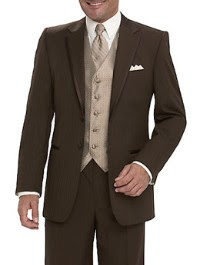 We were helped by a few different people and at the very end the person ringing up the order was also showing me some details about the whole ensemble – i asked if it were possible to change one little detail and he said only the bride or groom could go in and do it online. I had to politely inform him that, in fact, the sixteen-year-old-looking girl in front of him was the bride and I wanted to change that detail. He was a little surprised but recovered well 🙂
The men spent the whole time making fun of the choice of brown tuxes and then making even more fun of the fact that I had let my fiance choose the tux color – apparently in engagements the bride chooses everything because the wedding really has nothing to do with the groom? If that really is the case then I guess Ben and I will choose to do it a little more like we plan on doing marriage: making decisions together. (sometimes I playfully complain about how opinionated he is about all things wedding but I really appreciate having something that is interested in it with me and who will listen to all my ideas).
At the end of the ordeal one of the managers asked my dad, “so this is the real question – what do you think of the groom.” My dad paused for dramatic effect, “Actually – I haven’t met him yet.”
They all thought he was kidding. But no, my dad trusts my judgment in men enough to love Ben even though he hasn’t met him yet 🙂
Conclusion: Tonight made me feel very young to be getting married. I am very excited that in 3.4 weeks I’ll be feeling young to be married and not be just be getting married. And, I love my dad.