Skip to content
This shop has been compensated by Collective Bias, Inc. and its advertiser. All opinions are mine alone. #DipYourWay #CollectiveBias 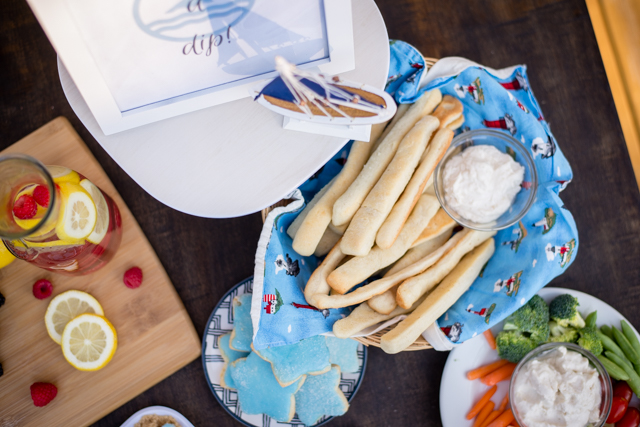 I can’t decide if I want to hold onto summer tight with both hands or jump feet first into autumn (new boots + fall plaid showed up thanks to the mailman this morning and I’m itching to break them out). The one thing that I feel like we’ve really been missing out on this summer though, is the ocean. Its not like I’ve ever lived on a beach, but in New Hampshire we are pretty proud of our 13 miles of coast line and our one “not quite warm enough to count as summer” day there in April just isn’t cutting it. But, land locked here in Ohio there isn’t much we can do about it other than buy a kiddie pool on clearance and let Lincoln bite his rubber ducky to death.

If you’re in the same boat (or not in a boat, as the case may be), Ben and I put together a little “Take a Dip” party perfect for the end of summer (and really we just had fun lounging on the hammock on the back deck while we snacked on all the food after we took pictures). Also, Lincoln thinks beach balls are the best thing next to bottles. He spent a good ten minutes chasing one around yesterday and danging one over his face last night brought on plenty of pre-bed giggles.

Anyway, pictures + recipes + commentary (and then trying to sneak in a nap before the baby wakes up): 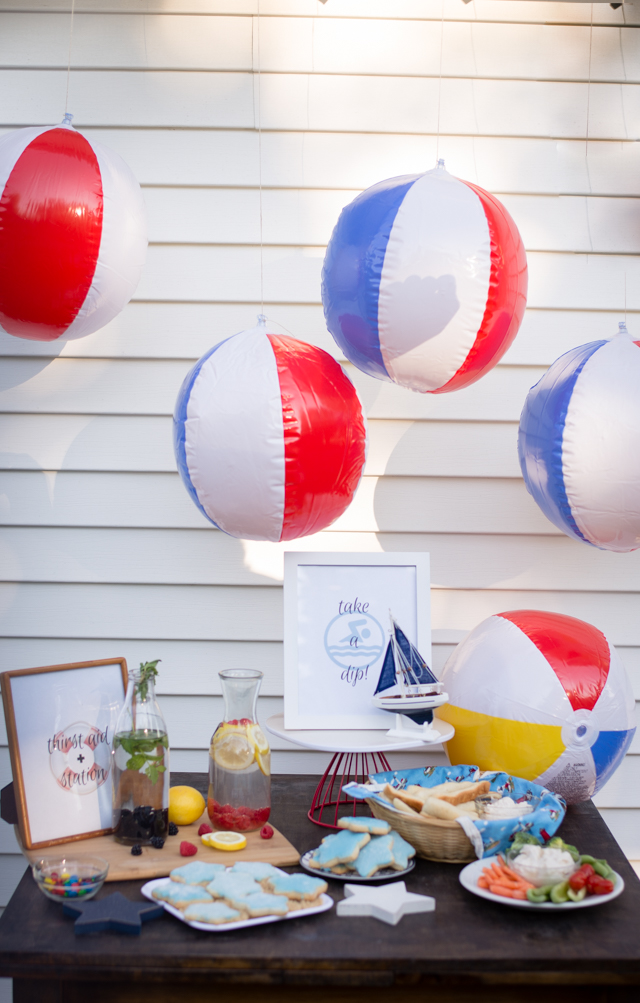 ^beach balls are on clearance just about everywhere right now and double as great decoration 😉 Plus, when they fall down you can just play volleyball with them and everyone wins. 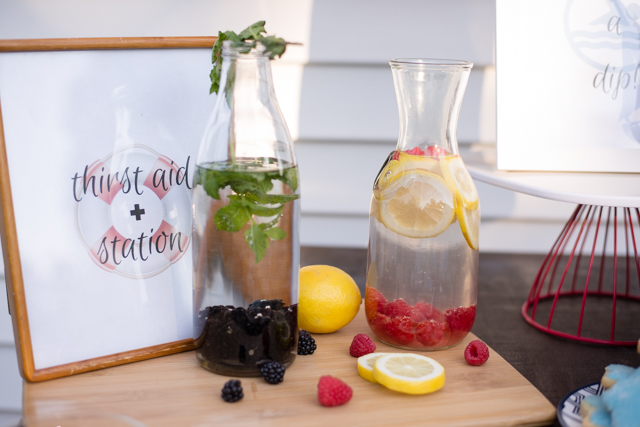 ^I’ve been dying to try out a few more infused water recipes (because anything to get me to drink more water these days) and even though Ben refers to flavored water as “gross wedding punch” (a silly story about thinking the punch at a wedding was awful, only to realize it was just supposed to be water), they’re quite delicious. You can throw in just about anything, but I really liked the blackberry + mint combo. Just make sure you let them soak at least an hour before you’re planning on drinking them, giving the flavors plenty of time to infuse into the water. 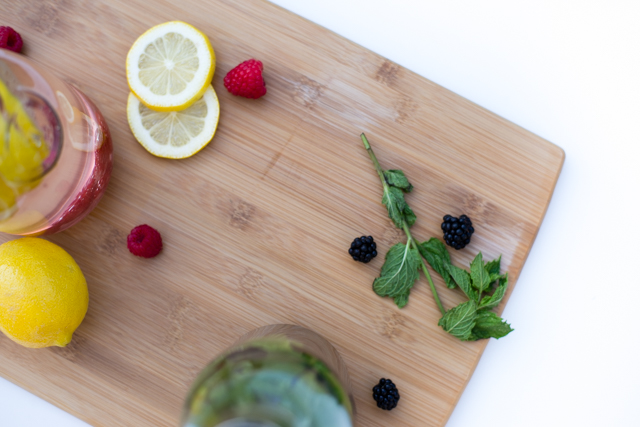 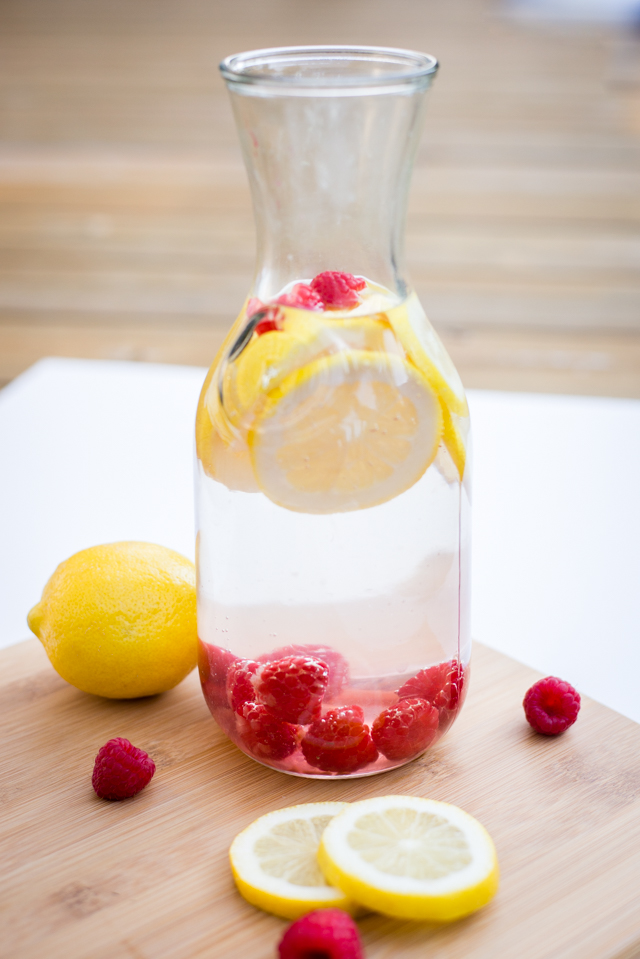 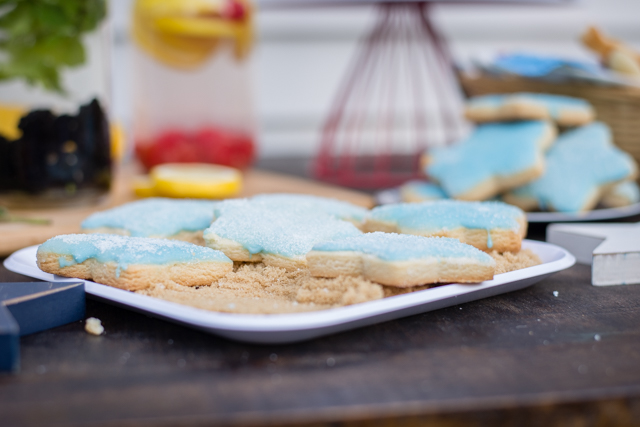 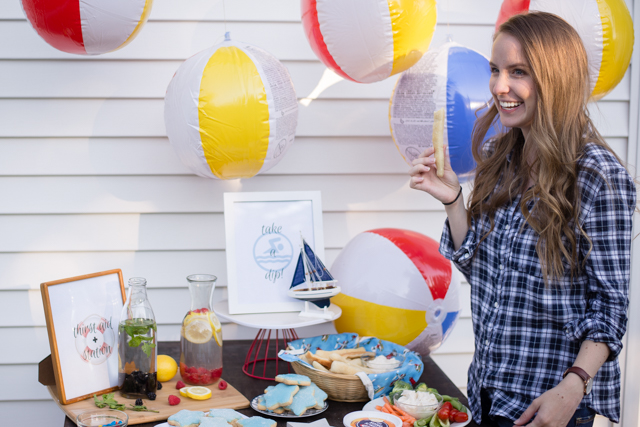 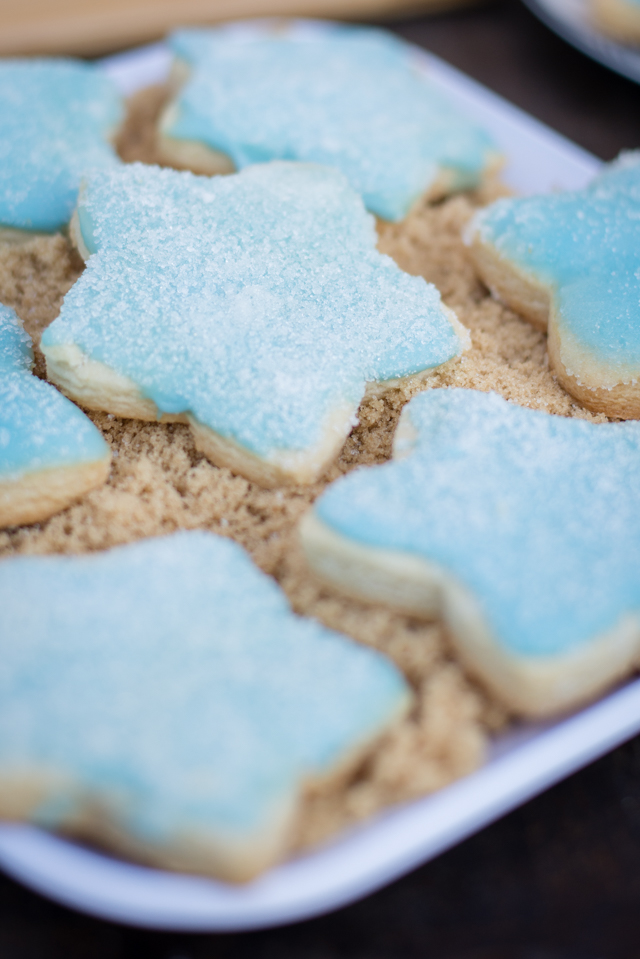 ^we had similar seahorse cookies served over brown sugar at my bridal shower many years ago (except my mom has darling Williams & Sonoma starfish + seahorse cookie cutters, but you get the general picture). I’ve included the sugar cookie recipe in this post (from forever ago) if you’re interested, but it’s our very favorite (and the one I grew up on). 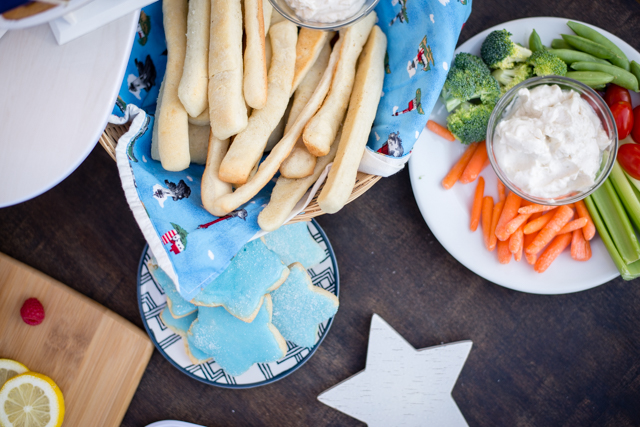 ^If you’re throwing an end of summer bash, stick to finger food and give everyone lots of things to dip. Maybe even have a variety of dips. 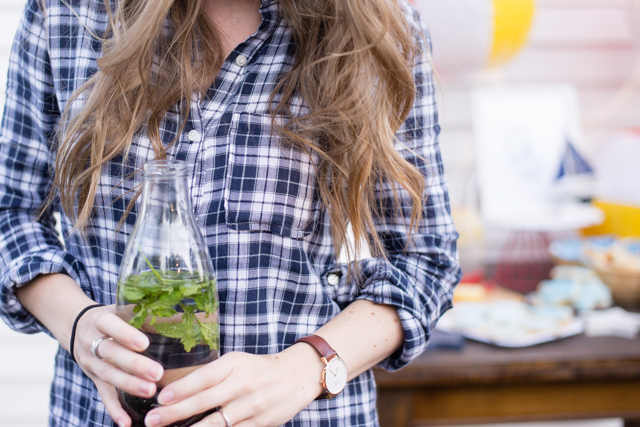 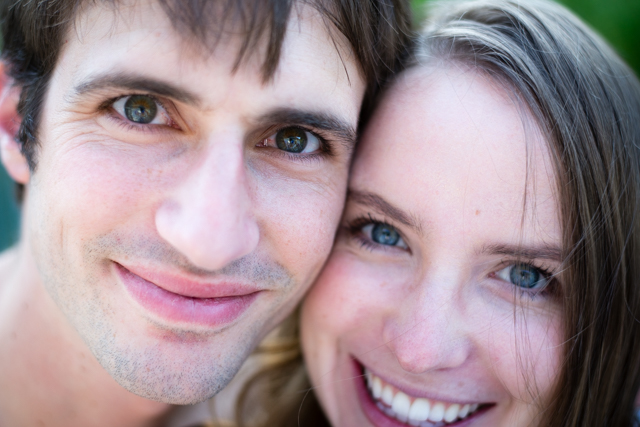 recipes + printables after the jump 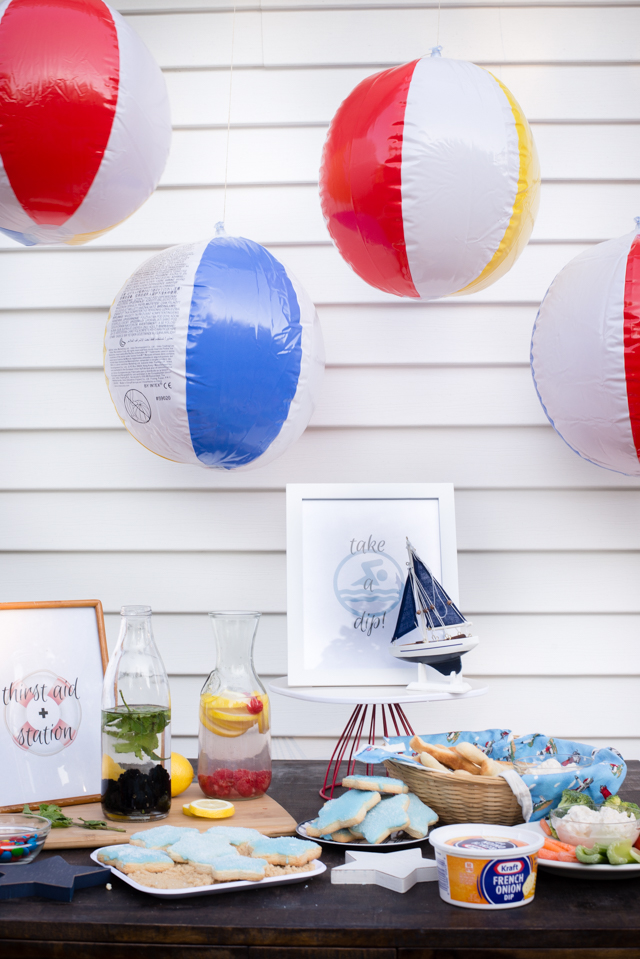 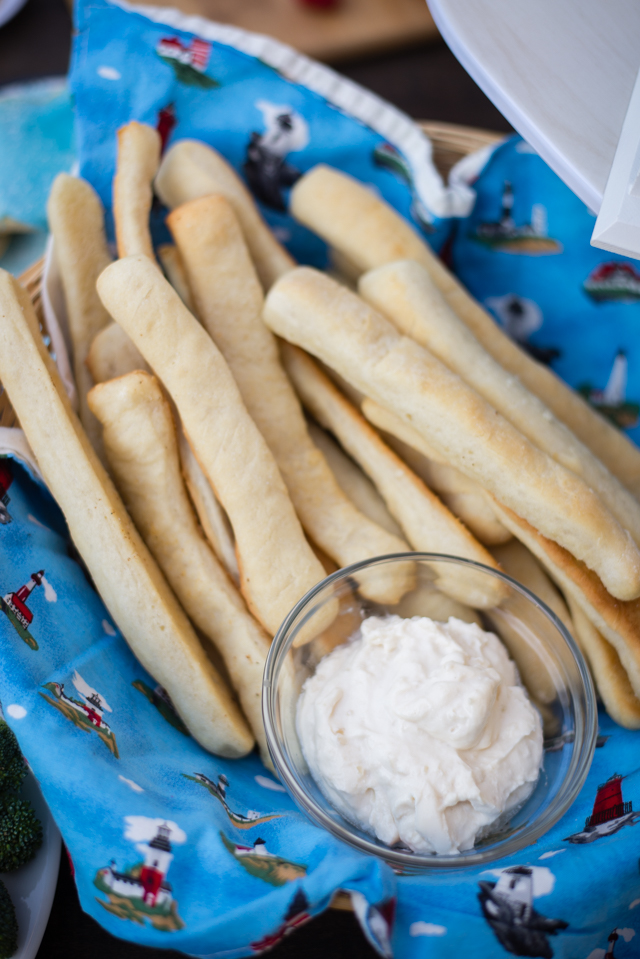 These bread sticks are incredibly easy (and are basically the same ones I made for 400 people on Halloween two years ago). They’re not something you’d first think for dipping along side veggies, but they’re a bit more substantial than chips and much yummier fresh out of the oven. They also pair great with Kraft’s dips that have just been redesigned in fun new packaging (we tried them in the French Onion and the Green Onion). 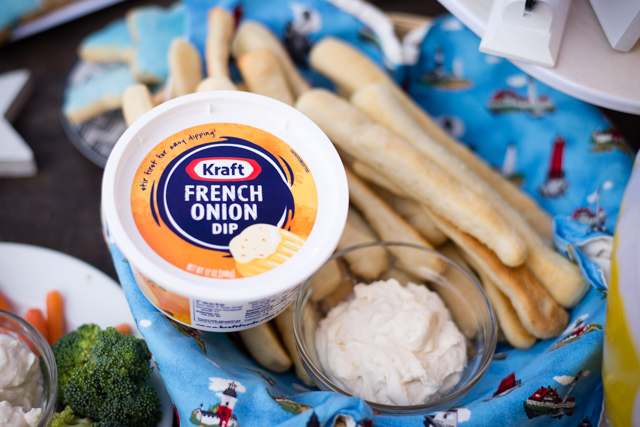 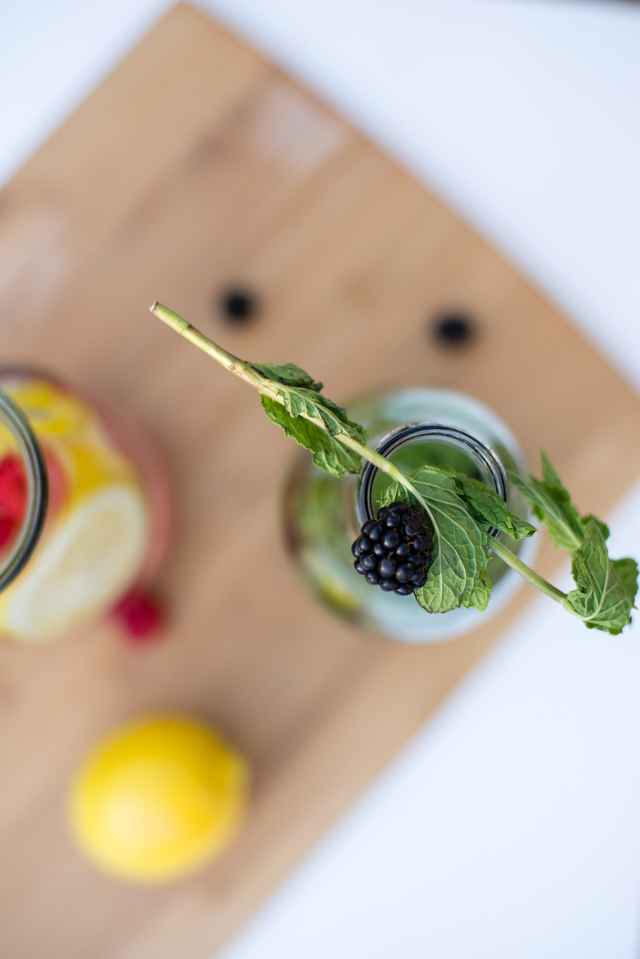 I shared the full res version of these printables here if you want to use them!
Check out all these fun recipes to get the most out of the last few weeks of summer.

^P.S. The dips are found in the refrigerated section, not by the chips where I initially was hunting.