You are here: Home / marriage / The Story of Us – from the very beginning
People have been asking – and after telling it at my bridal shower

tonight I thought I should get it all written down – the condensed version. enjoy.

It all started with a pair of earrings.
Sunday, November 21 I sat between my roommates at a church meeting in the beautiful Provo tabernacle. As we filed out of our row after a wonderful service I looked up to a voice behind me, “I really like your earrings.” “Thanks!” I responded to the handsome stranger with a smile, “I’ll have to wear these more often I love compliments,” I thought to myself. And I do -he loves them because the hanging part is flexible-  I wear them all the time now 🙂
A few weeks later on Monday, December 6, my lovely roommates and I were helping clean up from a ward Christmas activity. Courtney had won the ugly sweater contest and I had spent most of cleaning up waltzing around the emptying cultural hall. Partway through dancing I noticed incredible music from the piano – whoever was playing was very, very good. I looked over to see Brittany standing over some boy. He was quite talented …and I’ve heard my share of pianists in my life. I stayed my distance, not needing to intrude, but when the music ended and this boy walked across the room a compliment was due.
“You’re incredible.”
“I’m Ben.”
“I’m Elisabeth – nice to meet you.”
And I went home. thinking very little of it. A few days later I got a facebook friend request from Bennythejet Gringeri (to be honest I had no idea who it was) – and was flattered when I realized it was the boy from Monday night. We chatted for awhile on facebook (and by awhile I mean 45 minutes). He was studying chemical engineering and had always wanted to do an internship in Boston. He had relatives on the east coast but he was definitely a California skater boy – not really my type (but what is type anyway?) He needed to get back to his homework but asked if I’d gotten his message – initially confused, I grabbed my phone from my bedroom and saw the missed call. Our first date was set for that Friday.
Some Background: My roommates and I had just started “secret santa” with this house of boys who happened to be bens house (called “the cube”). We would stealthily leave little treats or gifts always acoompanied by a note kissed with lipstick. I didn’t know anyone in the cube but we had decided they were young and fun and we should probably get to know them.
More Background: Ben planned a group date with all 12 boys in his house. The one stipulation: you couldn’t have met the girl you were asking out prior to that Sunday – so having met me on Monday, I was perfect.
His apartment ended up over that Thursday night to watch Elf (not my idea). I wasn’t feeling so great so I think I fell asleep for part of the movie. Ben and I sat on the same two-person couch but zero snuggling of course. He mentioned how I needed to get better for tomorrow. I said I’d work on it. 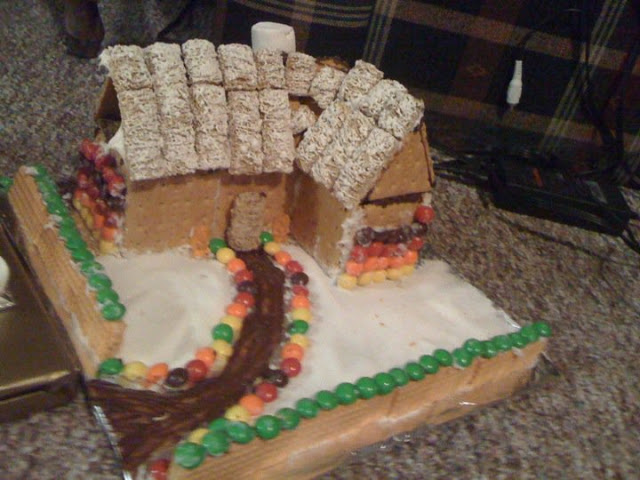 Friday evening he texted me on his way home from climbing to ask what my favorite candy was. I couldn’t really think why he needed it but turns out we were decorating gingerbread houses. He showed up at my door in jeans and white vneck (I was wearing my flare AE jeans with my maroon gap sweater – yes, six months later I know that). On our way there we stopped to watch the Christmas lights I LOVE Christmas lights🙂 We decorated and chatted and got to know each other a little. He was a musician. He was from northern California which was very different from socal according to him. After delivering the gingerbread houses I was the last girl to leave and his roommates took the opportunity to grill me on the secret santa business. I was a very good liar to say the least 🙂
The next week was a flurry of finals, ice cream, art museums, concerts, roses, chocolate, gospel discussions, text messages, smiles, and hugs. And then on Thursday morning I flew back to NH for the next two weeks wondering how I had managed to see this same boy everyday for the past week. And how he took me to a concert in an art museum for our second date and how I wasn’t in love yet.
From Ben (story of Christmas Break) “can I just tell you how happy it makes me when my phone goes off and its a text from you?” 😀

I got back to Utah in January and he was over within 10 minutes with candy he and his mom had made over break. The next day was the first day of classes (and one of two days since I’ve met him and have been in Provo that I haven’t seen him).Ben, being the “no sense of personal safety” person that he is, separated his shoulder snowboarding that day. The loratab was an interesting addition to the beginning of our relationship.
Two weeks of seeing him everyday, going to dinner, and seeing Harry Potter where he put his arm around me for the first time later I found myself snuggled next to him in a car driving to California. We spent President’s Day weekend seeing his hometown, going to the beach, and getting to know his parents (boht our roommates and our friend Lindsay came too). I still remember the sensation in my stomach after we got in the car for the 10 hours home and he grabbed my hand. He didn’t let go for all ten of those hours.
By now I was canceling plans with other boys to see him and turning down dates at the prospect that Ben might ask me out for that night. Realizing this made our Thursday night DTR (define the relationship session) rather simple. He didn’t want to date anyone else, and regardless of what my cautious brain was telling me, my behavior spoke for itself. There was something about being with Ben – something so easy. I didn’t have to be anyone else – I just had to be me. That was all he wanted..and it was wonderful.
Our early weeks were filled with episodes of 24, games, dinners, library dates, and sheer excitement. I use to live for weekends, or for vacations, or for something exciting … but now it was like I had something to look forward to every single day: Ben. I would get anxious at 11 am realizing I had to wait another 8 hours before I got to see him. I wrote one night, ” love how all I want to do when he’s here is be with him – and when he’s not here all I want is for him to be here. And when he’s here I never want him to leave. And when he leaves I just want him to come back.”
February brought the stress of Valentines; what to do? What to get him? The stress was pointless – the day was perfect. He woke up to warm cinnamon rolls and quotes from my journal from December. He came home from school to pink sugar cookies and quotes from January. That night he opened a red tie and a note of the things I loved about him in February. But what made the day perfect was all him. He picked me up with roses and the hunt began. At dinner the server handed me my meal and my first poem. It was a clue. These poems took me all over Provo and finally served as coordinates on a map to help me determine the final location – Rock Canyon. We just lied there under the stars and held each other while we talked. Ben, roses, poetry, hazelnut hot chocolate, and stargazing. It doesn’t get much better than that.
Valentine’s Day Poem Snippet:
Your expressions of affection incapacitate me,
All thoughts and distractions subside seamlessly
All pride and reaction turns to a sunrise inside.
You light up my life and I can’t emphasize enough how I adore you. I’d do anything for you, when poems turn to rambling, my mind begins scrambling, my heart stammering, hammering out every last note. Constant, unabashedly, emotional, fantastically, drastically, you’ve changed my whole world and brought hope.
I could hold you for hours, with Jack Bauer or without. It’s so crazy how kisses give power to my heart. Our start, not traditional, nonetheless, it’s sensational, amazing in every way, and yet a dissertation couldn’t ever entreat English to meet its needs completely, to express the rest when words can’t find their meaning…
February also brought “I love you”s and my first climbing experiences. March included many weekends with Sarahjane and Dave as well as more talk of marriage. I was smitten. I was falling. And all I could do was hope that he was there to catch me.
We spent every second together. If we weren’t in class we were at work and if we weren’t at work he was climbing and I was dancing, and other than that we were together, always together. I started wanting that always to mean forever. – After a rather difficult weekend in April I found out it was what he wanted too. On the seventeenth I wrote, “Today was wonderful. My life is bliss. I’m so happy. He’s happy. We went ring shopping. Every time I see him its like magic – and I appreciate him so much. I’m torn between being so excited to be getting married to him – and so excited just to be with him – to hold him and to kiss him and to talk to him and text him and see him and have him want me. yeah – its pretty wonderful.”

My mom came out a few weeks later and wedding planning began even though a ring wasn’t on my finger. I had to wait until May for that. But wonderful things are worth waiting for, and the proposal was certainly wonderful. (You can read more about the proposal here). Life in June is now busy with wedding planning and getting to know each other better than we know ourselves.
And that’s us. Some people don’t get it right away. At my bridal shower tonight Brittany said, “We were a little concerned at first – but now I can’t even imagine someone more perfect for Elisabeth.” And it’s true – we’re very different and we’re both far from perfect (He’s significantly closer than I am)…but we happen to be perfectly happy with each other and perfectly ecstatic about spending eternity together. He’s my best friend. He’s my inspiration and my motivation. I’m closer to the person I want to be, and the person God wants me to be, because I know him. He’s turning into my whole life – and I love him. I love falling in love with him over and over again. We decided that love isn’t actually something you fall into, its something you build. We’re building that love, everyday – and it’s my favorite part of living. 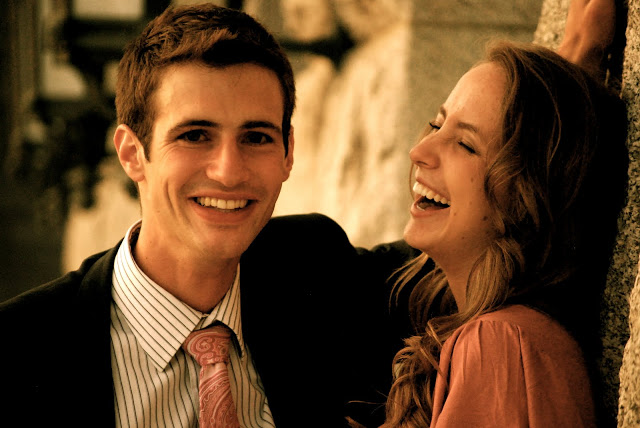 Shop Nighties, Bags, Espadrilles, Bags and more. Get this widget.