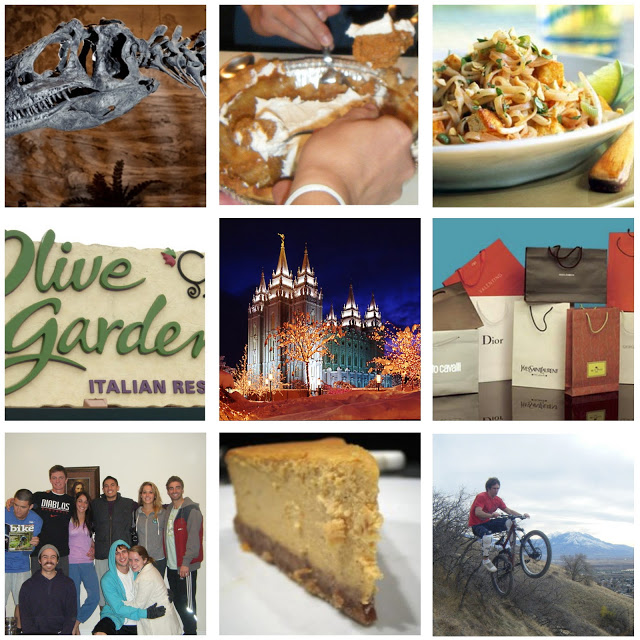 My one regret about this thanksgiving is I hardly took ANY pictures!
But thanks to google images and a few of my own I can still give you a glimpse of our break.
Ben’s parents got in Wednesday night and the four of us enjoyed a lovely leisurely dinner at Olive Garden (one of my favorites). The only problem with that place is before my food has even arrived I’ve eaten my fill of their heavenly breadsticks! It was nice to spend some time just the four of us before the business of the holiday festivities began.  (image: middle left)
Thanksgiving morning Ben and I slept in because dinner wasn’t till five (yeah I know its super late, but his cousin had dinner at the in-laws at 1 and we were waiting for her 🙂 After a breakfast of crepes and baking chocolate chip pumpkin bread (recipe coming later this week), we headed over to the Y-jump with one of our bikes so Ben could get a little adrenalin and exercise before all that food. I was just the photographer but I did get on a bike for the first time since the sprain (kind of a big deal). I was just grateful Ben didn’t die on this jump. (Image: bottom right)
Dinner that night was delicious. We ate at his aunt and uncle’s in Salt Lake with his parents, two cousins, and two very entertaining dogs. The highlight of the meal was the garlic mashed potatoes until they took out this heavenly dessert: pumpkin cheesecake in a gingerbread crust (recipe here). It was so much better than any pumpkin pie I’ve ever had and I didn’t even think I liked cheesecake! (Image: bottom center).
We headed off for a crazy night of shopping when we met Dave and Sarahjane at Walmart at 10. It was insane. Needless to say I had nightmares that night when we finally got to sleep at about three of getting trampled. I’ll be sharing all my black friday deals with you as part of friday favorites this week so I wont spoil any of them here. (Image: middle left)
Friday afternoon after a bit more shopping we met up with the family again to go see the new natural history museum at the University of Utah. There were SO many neat things to see! My favorite were the dinosaurs (maybe because we just watched Jurassic Park?). As cool as the museum was we were simply exhausted by the end of it and crashed back at his aunts for two hours of much needed sleep.
(Image: top left)
That evening after another dinner at Ben’s aunts we walked around Temple Square in Salt Lake and saw all the lights. If you live in the Salt Lake area the lights at Temple Square are a MUST this season! Ben and I are going back for sure. (Image: middle middle)
All the shopping and late nights did me in so after a lazy day on Saturday trying to get over a slight cold and sore throat, we met everyone in Salt Lake for thai food. Pad Thai is one of our favorite dishes and it was great to see everyone one last time. (Image:: top right)
The festivities continued with the traditional pie night at the Lee’s on Sunday night. This was my first year but apparently everyone eats out of the same pie. (Image: top center) I refrained because I was still sick but it was fun sitting and visiting with everyone and hearing about their thanksgivings. (Image: bottom left)
Overall it was a great weekend that has made me not want to be back at school, and has made me so very very very excited to be going home to my family on the east coast in just a few weeks!
Love,
Elisabeth
PS. How was your thanksgiving?
Do you have any fun thanksgiving traditions?
Don’t forget to check back this week for a wednesday wedding details post from the groom, a great holiday recipe, and my black friday finds 🙂