You are here: Home / everything else / The Lion and the Lamb: a parable 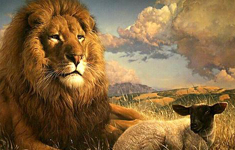 One day, the great lion king, Mufasa, fell ill. He summoned all the acclaimed doctors from across the savanna to pride rock. He commanded them all to prepare their best medicine in attempt to cure him. First, the mighty cheetah doctor presented Mufasa with his vile. The king drank and was still sick. A pompous zebra doctor, sneering at the crestfallen cheetah, produced his concoction. It too failed. One by one, the most renowned of the savanna offered their potions to no avail. The king began to despair. There then came into the royal chamber an uncomely lamb. Even the king joined the laughter of the learned and the great. How could a mere lamb outsmart the best doctors in the kingdom? The laughter rose to an uproar as the lamb produced no complicated mixture, but a simple cup of water. The wise king detected something noble about the simple lamb and brought the cup to his lips. The room fell silent as the animals watched the king drink and rise.
***

I was going through and cleaning my computer this morning and found this fable I wrote for English sometime in high school. It may be poorly written but I love the truth behind it. We are all looking for cures in life, and the world offers lots of solutions. They will tell you to make a little more money or lose just a few more pounds and then you will finally be happy. True happiness though, lasting happiness – can only come from one place. Sometimes I think there needs to be a more complicated answer, “How can it really be that simple?” But it is – all we have to do is love the Lord, follow His commandments, and let Him change our hearts. Its simple, not all that easy, but its simple. Simply beautiful.