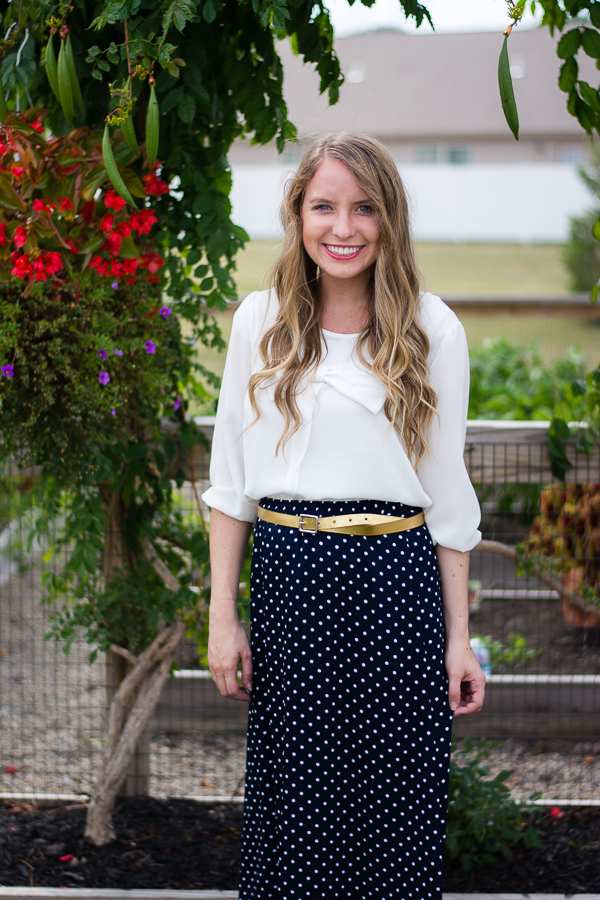 I met Ben on December 6, 2010. We were engaged by May and married exactly three months later, three months before my twenty-first birthday. Even if I had wanted to, I couldn’t legally drink at my own wedding.

My baby cousin got engaged last week (in the most movie-esque proposal complete with fresh rose petals and thousands of candles…you can watch it here), and it had me wondering how on earth she could be old enough to be getting married. Then I realized she’s three years younger than I am…and I’ve already celebrated my third wedding anniversary 😉 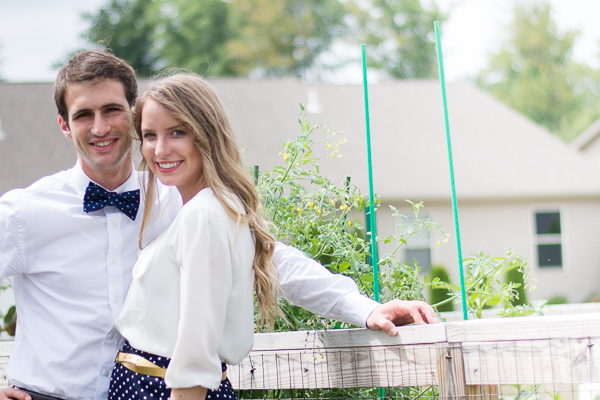 Marriage at any point requires working at a set of skills that part of our culture tells you is rather useless. In a society that is about getting ahead, marriage takes quite a bit of time, a lot of selflessness, and a dash (or twenty) of forgiveness. It teaches you to put others first, communicate with kindness, and be willing to assume the best. It means finding a long term picture you can agree on and sacrifice for. I think it takes either a level of maturity or a level of determination (I probably had the latter) to get married young. For me though, marrying young was easier, more rewarding, and more fun than anyone led me to expect.

Well yes, I guess at times it has been hard (but so is school, having siblings, and cooking dinner..and no one tells me not to do those things). Each year has gotten progressively better so that makes the first year the worst (the best worst I’ve ever experienced). You can focus on the negatives of any situation, relationship, or decision…and I think society does that too often with marriage.

“It’ll ruin your relationship,” it tell us.
“Commitment ties you down,” it warns.
“You’ll fall out of love,” it convinces. ***

We caught ourselves reminiscing about college this weekend and it reminded me how grateful I am to have Ben a part of those experiences. That, and I’m grateful I spent those two years as his wife, working toward our future, certain of each other. I’d tell people then that marriage has all the perks of dating, without any of the downsides. There is a beauty and a power that comes with commitment…and it has lead to lots of added happiness for us. It is not a decision to be made lightly, but, if given the chance, its not a happiness I would have put off for anything. 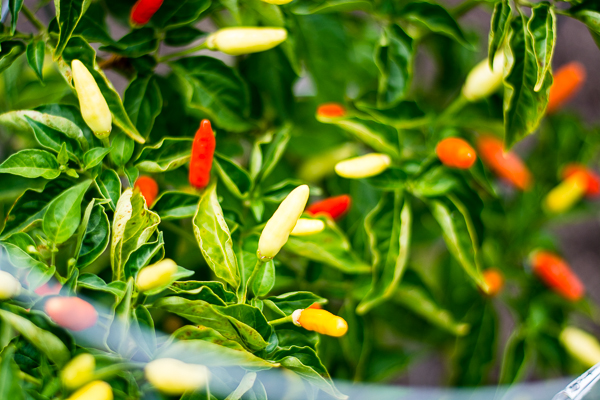 It made me so excited this cousin of mine gets to have it too, those last years of college together. I never felt like a real adult then..it was a growing stage full of small amounts of adjusting and lots and lots of fun. And so to her I say:

People will tell you it will be hard, and like all good things, parts of it will be (maybe). My favorite piece of marriage advice has been this:

Marriage is more wonderful than I could have expected. It is also more rewarding, more fulfilling, and more joy-bringing. Being united with someone not only in love, but in goals and purpose and hopes and dreams…it’s a beautiful thing. Nurture your marriage, and it will blossom. As you make it a priority, other things fall into place, and life with your best friend will continue to get sweeter.


I’ve only been doing it for three short years, and already I can say it has brought more joy and more growth than any other relationship or any other decision. Marriage, in short, is awesome. 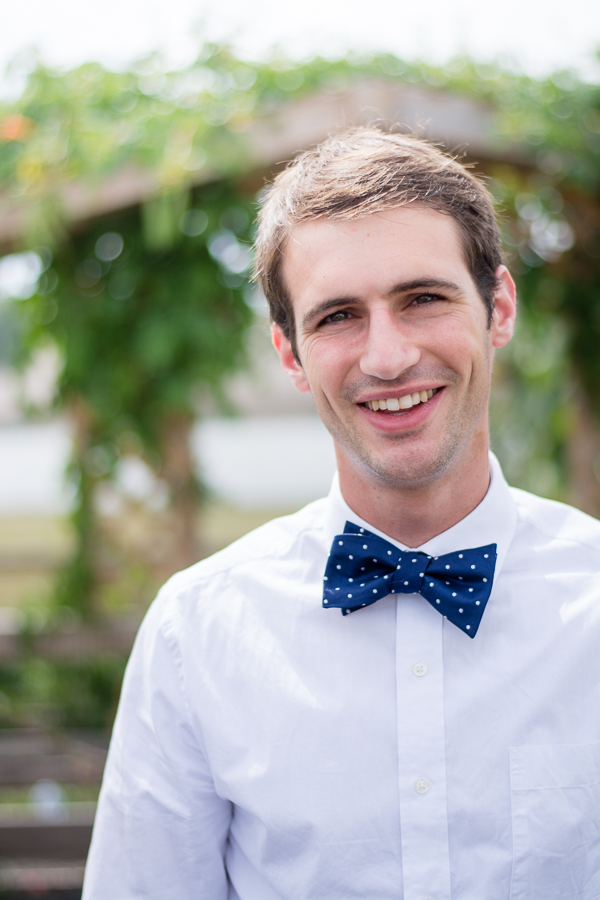 ^Oh how I love this boy for who he was when I married him, who he is now, and for who I expect he’ll be years down the road. 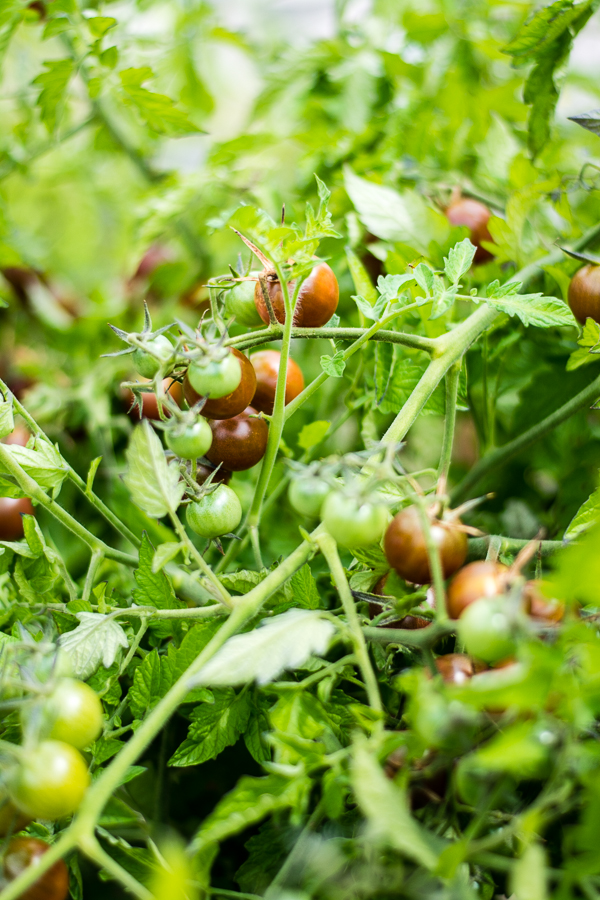 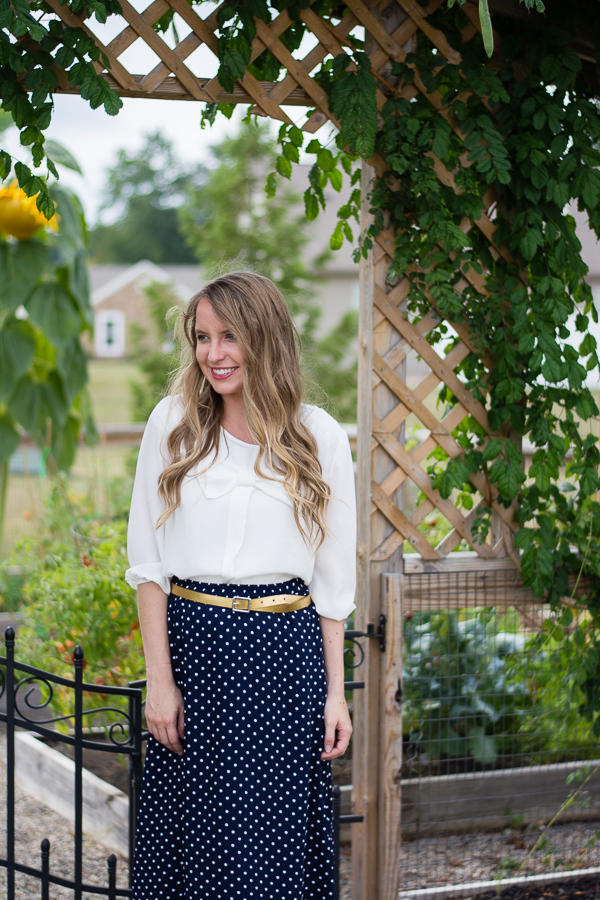 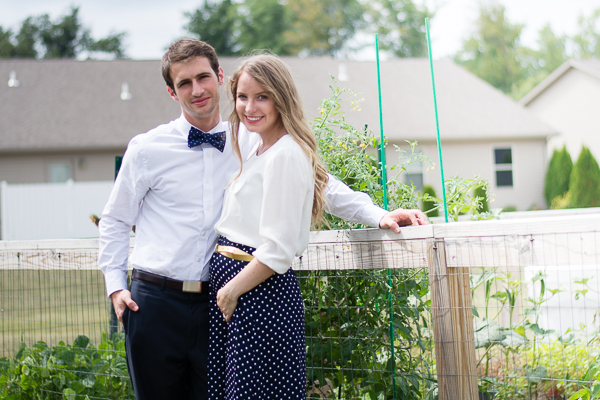 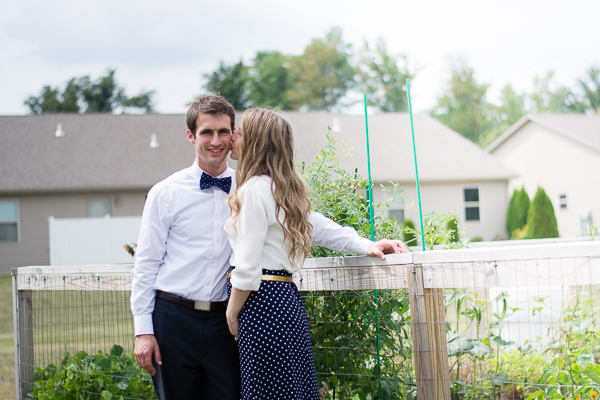 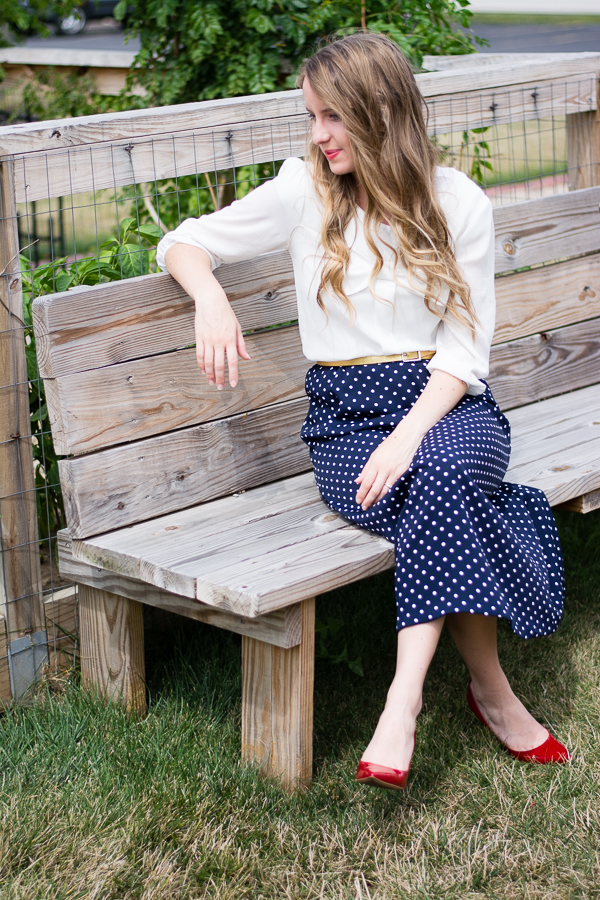 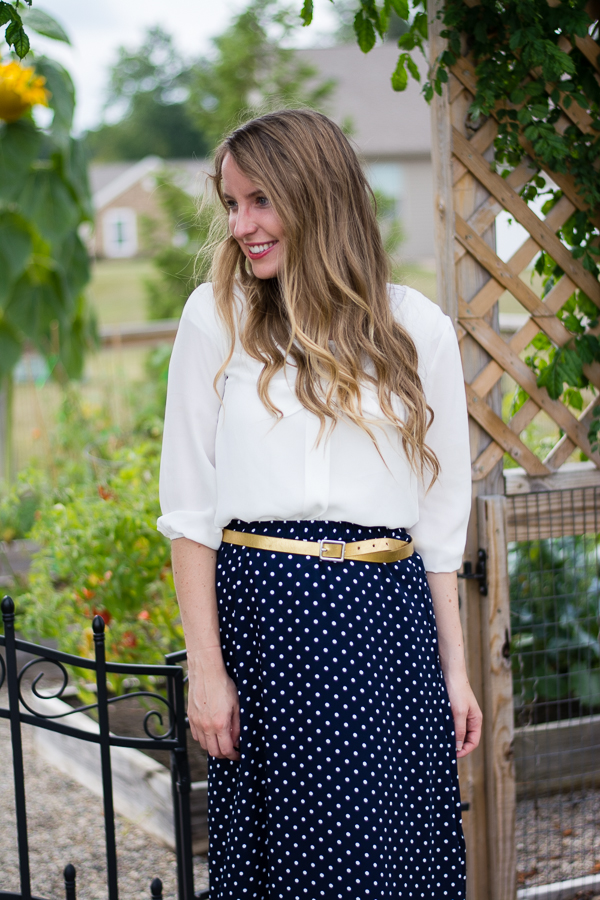 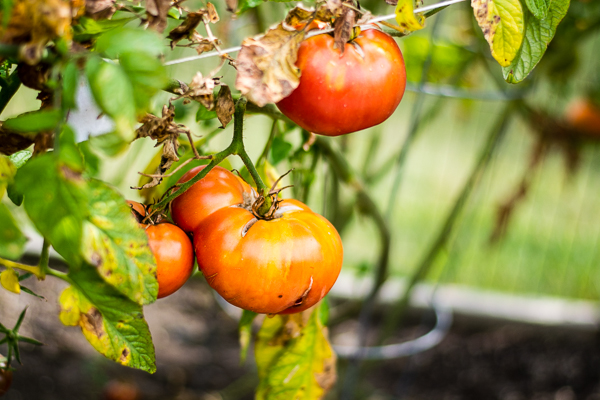 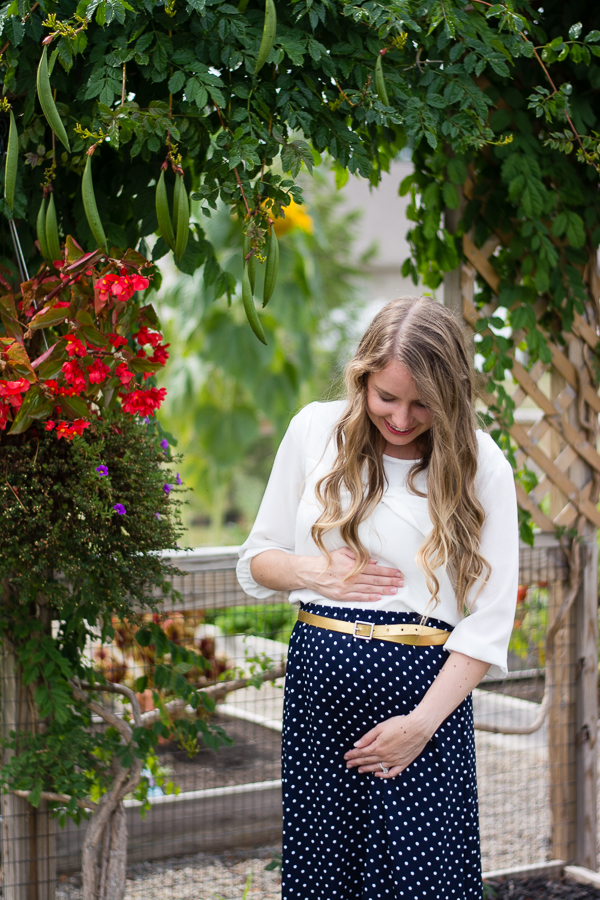 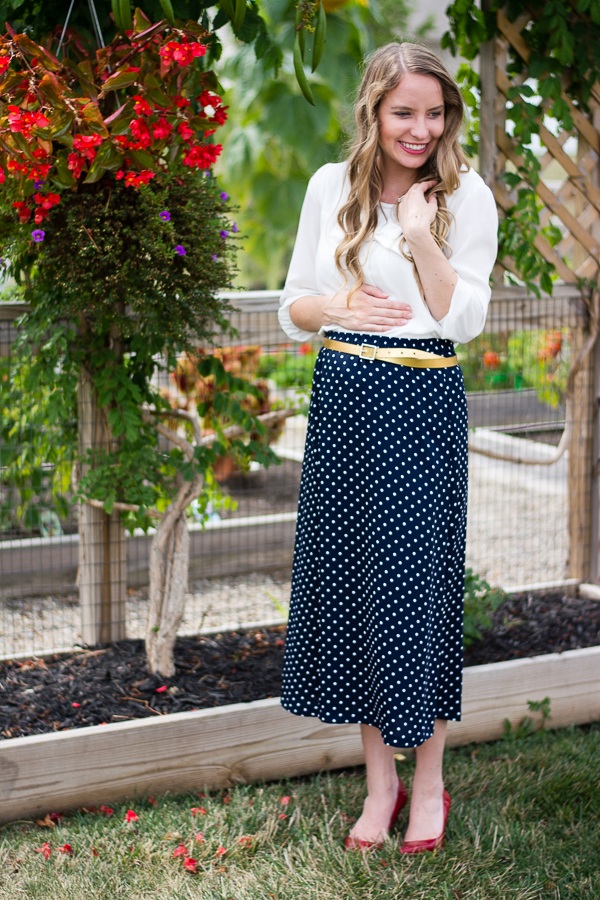 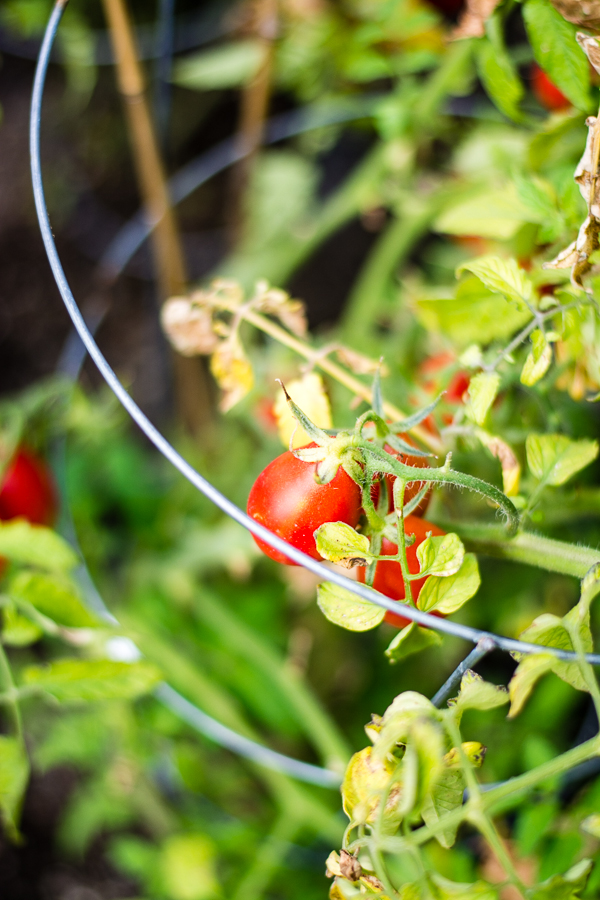 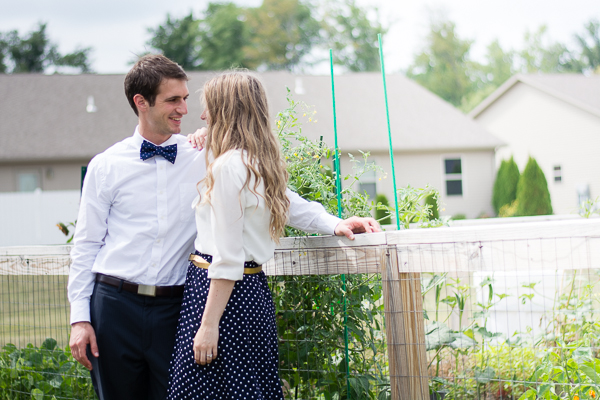 ^^All pictures from Sunday after church (just past 20 weeks). Straight midi skirts with elastic waists and my new favorite things to wear at this stage in the “bump growing” process. Most of time time I can embrace these body changes…but every once in awhile I struggle to feel anything but large (almost up 15 pounds). A few good clothing pieces and a silent prayer do wonders.

outfit details:
skirt: thrifted (basically the same thing here)
bow blouse: sold out (found the same one in black as well as taupe here)
belt: J.Crew (similar metallic here)
shoes: here (my favorite pair of heels, something I love enough to have bought in multiple colors)

***I need to dedicate another whole post to this notion of “falling out of love” (because after my short three years I’m an expert, clearly). The post is coming, and the notion is rubbish. You can indeed “fall out of love” but to believe you will be the victim of that unfortunate circumstance and that there is nothing you can do to stop it….that is the idea I’d like to throw in the garbage.

What would you add? Why do you think marriage is awesome?