Skip to content
I think it was great that thousands of other women around the world got to listen to President Uchtdorf, an apostle of the Lord speak on Saturday, because he happened to be talking just to me. I felt like if his remarks had been written to address all the concerns I’ve had, it wouldn’t have been any different. He is not only an inspired speaker, but his metaphors and symbolism are beautiful. He spoke of the forget-me-not flowers and used the petals to remind us of five things we should “Forget Not.” 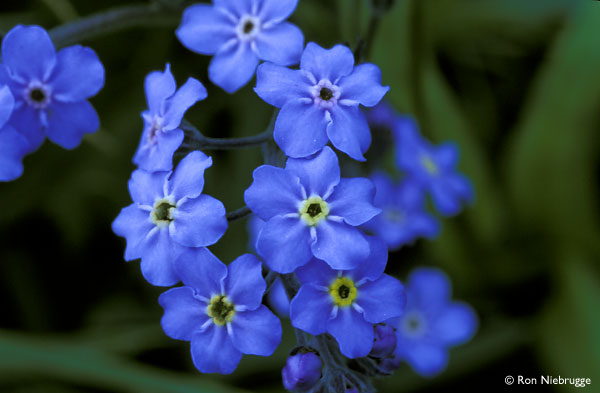 “No matter how dark your days may seem, no matter how insignificant you may feel, no matter how overshadowed you think you may be, your Heavenly Father has not forgotten you. In fact, He loves you, with an infinite love.”
President Dieter F. Uchtdorf, Second Counselor in the First Presidency, gave this loving reminder during the General Relief Society Meeting on September 24, 2011.
Using the forget-me-not flower as a metaphor for his remarks, President Uchtdorf noted that although the flower is small in size, and easily unnoticed among larger flowers, it is still beautiful and vibrant.
President Uchtdorf tied the five petals of the forget-me-not flower to five things women should not forget.

Forget not to be patient with yourself:

President Uchtdorf reminded women that everyone has strengths and weaknesses—that no one is perfect, even those who may seem so.
“God wants to help us eventually turn all of our weaknesses into strengths, but He knows that this is a long-term goal,” President Uchtdorf said. “It is OK that you are not quite there yet. Keep working on it but stop punishing yourself. “
“Dear sisters, many of you are endlessly compassionate and patient with the weaknesses of others,” he added. “Please remember also to be compassionate and patient with yourself.”

Forget not the difference between a good sacrifice and a foolish sacrifice:

President Uchtdorf defined an acceptable sacrifice as giving up “something good for something of far greater worth.”
“Dedicating some of our time to studying the scriptures or preparing to teach a lesson is a good sacrifice. Spending many hours stitching the title of the lesson into homemade potholders for each member of your class may not be.”
President Uchtdorf noted that every situation is different, and suggested asking, “Am I committing my time and energies to the things that matter most?” in order to distinguish between good and foolish sacrifices.

Forget not to be happy now:

Using an example from the book Charlie and the Chocolate Factory, President Uchtdorf described how one of the characters, Willy Wonka, hid golden tickets within chocolate bars, promising to reveal wonders to five people who discovered the tickets.
“In their anxiousness, people began to forget the simple joy they used to find in a candy bar. The candy bar itself becomes an utter disappointment if it does not contain a golden ticket,” President Uchtdorf said. Whatever a “golden ticket” may represent to each person, President Uchtdorf warned Relief Society sisters to not put their happiness on hold as they wait for a future event, or golden ticket, to appear.
“The lesson here,” he said,” is that if we spend our days waiting for fabulous roses, we could miss the beauty and wonder of the tiny forget-me-nots that are all around us.”

Forget not the “why” of the gospel:

President Uchtdorf said that sometimes, in the routines of daily life, the vital aspects of the gospel of Jesus Christ are unintentionally overlooked.  “We sometimes see the gospel as a long list of tasks that we must add to our already impossibly long “to do” lists. We focus on what the Lord wants us to do and how we might do it, but we sometimes forget why.”
President Uchtdorf reminded the sisters that the gospel is not an obligation, but a pathway leading to happiness and peace in this life and “glory and inexpressible fulfillment” in the life to come.

Forget not that the Lord loves you:

In closing, President Uchtdorf said, “Just think of it: You are known and remembered by the most majestic, powerful, and glorious being in the universe! You are loved by the King of infinite space and everlasting time.”
“You may at times feel a little like the forget-me-not—insignificant, small, or tiny in comparison with others,” he said, noting: “I hope (the forget-me-not) will be a symbol of the little things that make your lives joyful and sweet.”

To the church website where the full talk should be soon…